'As a nation we came up short, but that did not deter Kalam. He made it his life mission to exhort the young to greatness,' says Mohan Guruswamy. 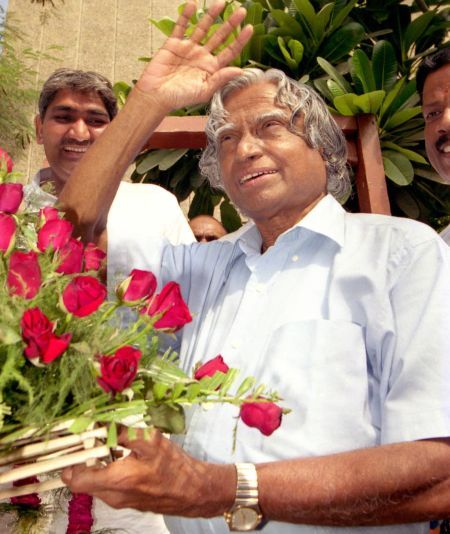 Kalam had little in common with his predecessors. He did not have the educational attainments of Dr S Radhakrishnan, Dr Zakir Hussain and Dr Shankar Dayal Sharma who were genuine PhDs from top-notch institutions.

Kalam just had an engineering degree from Madras University. He did not have the political training of Presidents like Rajendra Prasad, V V Giri and Pranab Mukherjee, whose political and Constitutional understanding was tested in politically uncertain times. His entire professional lifetime was spent in the Defence Research and Development Organisation.

The DRDO has not exactly distinguished itself in any great way. The sum of its failures is far greater than its achievements. Some of its failures are most notable. The Arjun Main Battle Tank is still bumbling along. The nuclear submarine project delivered some decades too late still faces uncertainty. The Light Combat Aircraft is just the late combat aircraft; so late that it will be obsolete when it enters service in the next decade. Even the 5.56 mm basic infantry combat weapon is a bit of a dud, requiring the frequent import of AK-47 rifles, much to the delight of Delhi's arms agents.

Kalam had earned a reputation as the father of India's missile program. That might be so, but the offspring is nothing worth writing home about. Our missile program is so far behind the times that even the North Koreans, a woebegone and desolate country where people still die of starvation, are ahead of us.

Like the Pakistanis even we would have been better off buying North Korean missiles like the Nodong (Pakistan name Ghauri). Many also credit Kalam as the being the father of India's nuclear weapons programme. That programme has, mercifully, little to do with the DRDO and is almost entire an Atomic Energy Commission show.

What then was Kalam's kamaal? Clearly, Kalam is no Werner von Braun, who designed the Nazi V-1 and V-2 rockets and then led America's manned flight foray into space with Alan Shepard's sub-orbital fight. He most certainly is no Igor Kurchatkov, who pioneered the Soviet Union's nuclear weapons programme.

But yet he is clearly among the best Presidents we have had. There is much that is admirable about Kalam. He was honest to the core. He was erudite. He knew Sanskrit. He translated the Thirukural (Thiruvalluvar's Tamil classic) into English. He was a nationalist with few peers. He only lived for India.

He was also a bachelor and so no offspring or foster family who might have caused him embarrassment. But for a modest man, with mostly modest achievements, Kalam captured the imagination of young people like no President did before.

He made us believe in ourselves and think the sky was never too high. He dreamed of things that never were and wondered why not.

As a nation we came up short, but that did not deter Kalam. He made it his life mission to exhort the young to greatness.

India's young will miss him.