One wonders what, given the recent past, the next quarter century holds in store for India, asks Aakar Patel. IMAGE: Women pose for a selfie at the Polo Ground in Patiala on Independence Day. Photograph: ANI Photo

The four stages of life, according to some of our Hindu texts, are brahmacharya, grihastha, vanaprastha and sanyasa.

These are supposed to be broken into segments of 25 years each.

The first quarter century is the life of studying and abstinence and poverty. For us, as a nation, this was from 1947 to 1972.

It is not easy to deny that indeed we were poor and we were finding our way in these years.

It was a period of struggle and defeat, but hopefully also one of learning.

Our population went from 350 million to 500 million in this period.

Our per capita income when we came out of this era was not very different from when we entered it.

In 1972, the average Indian made the equivalent of about Rs 1,000 a month: A student's allowance.

The second stage, grihastha, is from the early 1970s to 1997. This is meant to be the period of productivity.

It is when we establish the household and it is considered to be the most critical of the four stages. The phase when we get things done.

Our population doubled from 500 million in 1972 to 1 billion in 1997. Our household expanded as never before.

How we performed economically in this quarter century is for the historians to determine when they assess us fully after we finish 100 years.

But consider that this is the same period in which the few successful nations of the 20th century usually took off, including South Korea, Singapore, Japan and even China.

All of us -- Korea, China, Taiwan and Japan came into their new independence the same time as India and Singapore became independent in 1965 -- entered into the phase of grihastha more or less together.

The most significant economic activity that individuals (and I suppose nations) do usually comes in this period.

Here in South Asia we have remained with our sisters and brothers in Bangladesh and Pakistan.

Bangladesh is today slightly ahead of us in per capita income and Pakistan slightly behind.

The third phase was from 1997 to 2022. This was our period of vanaprastha, meaning retirement.

When the household is handed over to the next generation, and when there is change and when the adult withdraws from duties.

The responsibility is over and Japan, Korea and China are today ageing.

China's median age is 40, Japan's is 50 and Korea's is somewhere in the middle.

India's is not yet 30. Japan has 20 times our per capita income, China six times and Korea 16 times.

Vietnam, with which we were even just a decade ago, now has twice our per capita income.

Have we done enough economically to pass on something meaningful to the next generation?

Again, this is something for later Indians to determine.

It is undeniable however that there was a change of householder here.

The old political party gave way to the new.

Now, at 75, we have entered sanyasa, where we have to be ideally be free of material desires and passions and prejudices.

And yet we have come into sanyasa full of passion and prejudice.

What we have renunciated is the promise of pluralism in our Constitution and the quest for a secular State.

Our passions are about how to punish other Indians and how to further privilege one religion.

Our desire and enthusiasm for nationalism is expressed through ceremonial things like polyester flags and aggressive slogans.

Dry numbers like per capita income do not quicken our pulse.

Falling behind even Bangladesh in per capita income is not something that has disappointed us and we do not feel the need to mourn.

We have been told to celebrate this current period as our amrit mahotsav.

It is not clear whether we are celebrating the achievements of our previous three phases or celebrating what is to come in the quarter century beginning this week.

If the former then, truth be told, we do not have much in the cupboard or in the trophy case to show the world as achievement.

If we are celebrating the latter, we have not been told what we are doing that is going to produce a break and a change from the past.

We have been told to celebrate and we are celebrating on the assurance that years leading to 2047 will be India's immortal era.

If we showed a youthfulness in our brahmacharya we are not exhibiting a cool detachment in our retirement.

We are showing signs of anxiety punctuated by frenzy.

It is not the behaviour of the mature person and not reflective of the wisdom of the aged.

It is unusual and one wonders what, given the recent past and the record since 1947, the next quarter century holds in store for India.

These are some of the things we might want to consider as we celebrate another independence day. 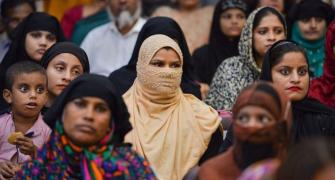