'In the Mahabharat, when faced by an enemy, Yudhishtir, the eldest Pandav, had quipped that 'When it comes to external enemies, we are 105, (100 Kauravs and 5 Pandavs)'.'
' It is time modern politicians heed this ancient wisdom,' says Colonel Anil A Athale (retd). 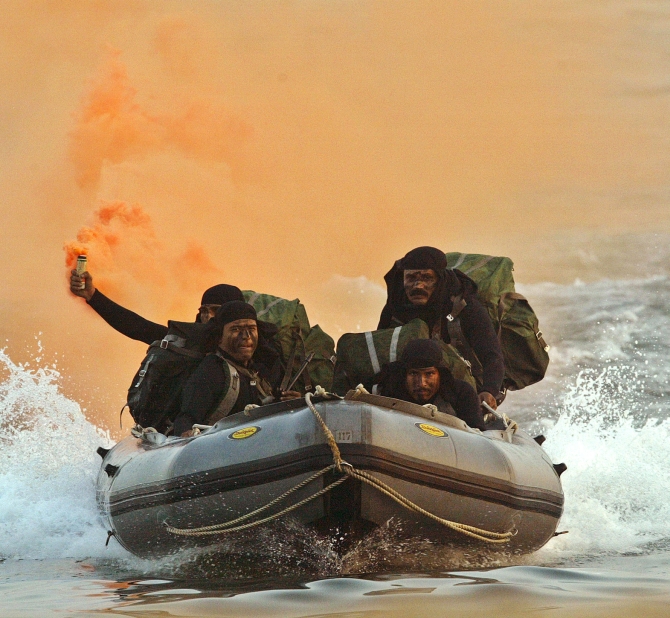 In the election season it is a forlorn wish and chances are that in the coming new year the Rafale fighter deal will continue to hog the media limelight for all the wrong reasons.

Sample this: Despite a clear Supreme Court ruling the Opposition continues to peddle the lie of a '30,000 crore scam'. A former senior minister, now in the Opposition, calls the air chief a liar. Words like 'chor' are freely used against the head of the government by the leader of the Opposition.

People have suddenly found virtues (non-existent) in the disastrous policy of public sector monopoly in defence production. HAL (Hindustan Aeronautics Limited) is being ascribed capabilities that are non-existent. Just a simple statistic should suffice to puncture the HAL claim.

While 41% crashes were attributed to 'pilot error', 40% were ascribed to technical faults. Even the figure of 41% pilot error is doubtful as unfortunately dead pilots tell no tales!

HAL is 10 years behind in the production of the Tejas indigenous fighter, the very reason why India has to go in for imports.

In 1991 when under P V Narasimha Rao's able stewardship, India embarked upon economic reforms and liberalisation of its economy, governmental control of many areas was given up and competition was encouraged. The results are for everyone to see.

India for the first time broke through the 'Hindu' rate of growth of 3.5%. We have never looked back after that.

Unfortunately, Rao left out the defence sector and the old State monopoly continued for a very long time. It is only now that some baby steps are being taken to introduce competition in this sector.

India, a well-developed economy overall, has two major weaknesses. One is our dependency on imported oil for energy needs and second is the dependency of the defence forces on imported arms.

For several years India has earned the dubious distinction of being the world's biggest arms importer. While Dr Manmohan Singh as finance minister introduced competition in many fields, he left the defence sector untouched.

I wish to make it very clear that one is not advocating wholesale privatisation, but merely that competition be introduced. India has today a diversified industrial infrastructure and that must be used to fulfill out defence needs.

Another aspect of the present scenario is that there are many 'dual use' technologies. Be it drones as hobby projects or military hardware. In this, the isolated and monopolistic public sector companies are often found wanting.

With India now a member of the Wassenaar Arrangement a lot of technology of dual use, earlier denied to us, is now available. Using an old Maoist term, we should 'Let a hundred flowers bloom' in the defence sector.

In the current situation, it is not only the Opposition that is to be blamed, the government also shares the blame for making defence a controversial issue.

It would have been ideal if immediately after the Rafale deal was signed, the government had briefed the Opposition on the salient aspects of the deal and the need for urgency. Although the record of the present Opposition is not very good on that account.

Remember that after the retaliatory strike post the Uri attack, the Opposition was indeed briefed, but it still did not stop the Opposition from questioning the veracity of the strikes! Despite this, the government should have persisted with the policy of taking the Opposition in confidence on major defence decisions.

The US, the world's oldest democracy is no shining example (witness the current shutdown of the government) yet one must remember that in the aftermath of the 9/11 terror attacks, the entire US political class came together.

In the Mahabharat, when faced by an enemy, Yudhishtir, the eldest Pandav, had quipped that 'When it comes to external enemies, we are 105, (100 Kauravs and 5 Pandavs). It is time modern politicians heed this ancient wisdom.

As a suggestion for future, could we include the leader of the Opposition (or the largest single party) as a member of the National Security Council? This single measure will nip in the bud all future controversies and serve the national interest.

If this is too radical a measure, then at the least, a practice should be evolved where select MPs are given 'in camera' briefing on security issues.

A final thought about the much bandied about 'transparency'. Does it mean that we construct a bedroom or bathroom with glass walls? There are issues of national security on which there has to be secrecy.

Our Constitution envisages division of power between the legislature, executive and judiciary. It is humbly submitted that the issue of national security falls into the exclusive domain of the executive and other arms of the State should be chary of interference. This is due to the twin factors of complexity and criticality.