Have Muslim women taken to the BJP even as their menfolk cling to 'secular' politics, asks Syed Firdaus Ashraf. 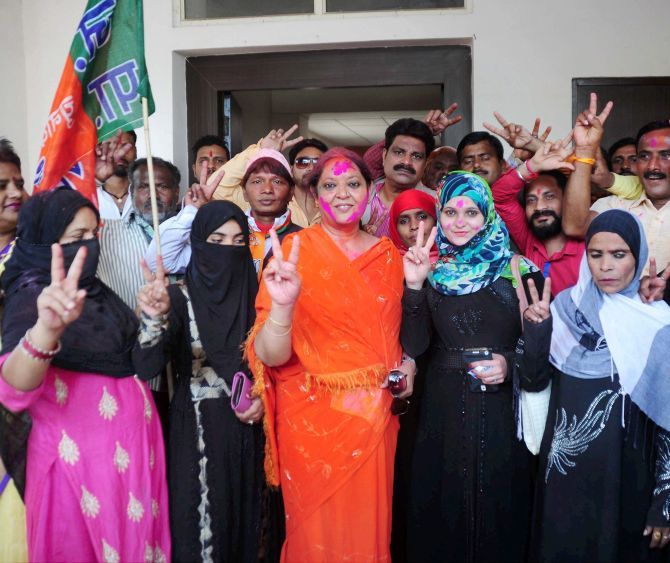 IMAGE: The Bharatiya Janata Party's Muslim supporters celebrate the BJP's victory in the UP assembly election at the party office in Lucknow. Photograph: PTI Photo

Over the Holi weekend, as the rest of the nation animatedly discussed the Uttar Pradesh assembly election results (and not so much over the one from Punjab), I watched the Israeli animated film, Waltz With Bashir.

But only after reading the newspapers to understand what reasons various columnists, experts all, gave for the Bharatiya Janata Party's thumping win in UP.

One analysis that caught my eye (external link) was by the articulate minister of state for external affairs.

M J Akbar's views when he was a journalist was always spot on, and here he was in his BJP avatar talking about why the poor have embraced Modi and how the vote merchants still don't get it.

I only met Akbar once. I was very keen to interview him and approached him with my request.

On seeing my name on the visiting card, Akbar gave me a condescending look, presumably like the one his party boss Amit Shah gives aspiring Muslim candidates.

Akbar's response to my interview request was a firm no.

Akbar, a former Congress member of Parliament turned BJP leader, wrote in his Sunday column about how Muslim women have become the first positive responders to Narendra Modi and how the BJP has won 104 UP seats, constituencies with substantial Muslim populations.

Muslim voters, Akbar emphasised, have embraced the BJP's development agenda, but the secular vote merchants still don't get it.

Which set me thinking. Was Akbar right in his analysis and conclusions?

Have Muslim women taken to the BJP under Modi, even while their menfolk cling to 'secular' politics?

The reason trotted out by analysts, experts and BJP leaders for this supposed turnaround by Muslim women was that the latter want to emerge from their purdah and vote for the BJP because they don't want triple talaq which the BJP is opposed to as well.

Change in the air, you say?

Nearly 150 years ago, another Muslim intellectual with an identical name, Akbar (Syed Akbar Hussain, popularly known as Akbar Allahabadi) wrote some beautiful poetry about the changing times for Muslims under the British.

Post 1857, Muslim society in India was in a state of shock, turmoil and decline.

English was given prominence and Persian went into oblivion. Urdu too started losing out to Hindi.

Akbar -- the poet, not the mantri -- wrote these poignant lines:

Another change that occurred in Akbar Allahabadi's time was that some Muslim women started coming out of purdah.

Akbar Allahabadi's observations then is the same as that of M J Akbar now, that Muslim women are looking for liberation.

I doubted M J Akbar's claim that Muslim women's votes in UP had gone to the BJP in good numbers.

I got my answer after I watched Waltz With Bashir.

The film is about an Israeli soldier, Ari Folman, who is on a quest to recover his lost memories of the 1982 massacres at the Palestinian refugee camps Sabra and Shatila in Beirut, Lebanon.

The film's message is about coming to terms, and is an honest account of a journey to confront the guilt of massacre.

I understood what Akbar meant in his column.

Instead of facing the guilt over the Gujarat riots of 2002 and the Muzaffarnagar, UP, riots of 2013, the BJP wants to change the narrative.

The BJP is not doing any soul-searching like Ari Folman did. Its leaders like Akbar want to divert the agenda by giving things a new twist: Divide the Muslim vote into male and female, which is nothing but a clumsy bid to push through the Uniform Civil Code agenda.

If Muslim women were raped (external link) during the Muzaffarnagar riots and riot accused politicians win elections, then the BJP wants the rest of us to believe that they won because Muslim women voted for the BJP.

M J Akbar needs to watch Waltz With Bashir. If he is too busy running the MEA -- since his official boss Sushma Swaraj is recovering from surgery -- Akbar should read Akbar Allahabadi's lines written 150 years ago: