News
Business
Movies
Sports
Cricket
Get Ahead
Money Tips
Shopping
Sign in  |  Create a Rediffmail account
Rediff.com  » News » A soldier is a symbol of our nationhood, let's salute him 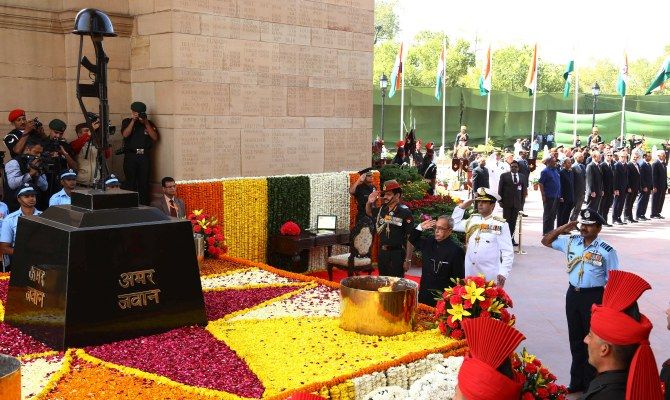 Is a martyred soldier just a statistic?
Our nation, a great civilisation, a great culture, must learn to respect and feel oneness with its soldiers, says Tarun Vijay.

How do you react to newspaper reports which mention the numbers of martyred soldiers and comment that this year's death toll has been higher than previous years?

Alongside appears a photograph of a mother who received the news of her 21-year-old son's martyrdom in Kashmir.

Is her son merely a number?

The father, who received a tricolour in place of his son's beheaded, mutilated, body, becomes another statistic.

Ask yourself how the family of a martyr feels if the entire country moves ahead, business as usual, and the one who died for them hardly gets even his name mentioned in the media.

What is the relationship of that soldier with us?

Who was Major Kunal Gosavi and what connection do we have with him and his family?

Is he merely an employee of the armed forces?

Just another incident that makes no impact on our life?

What if he was your son?

What would your reaction be then?

Is it not an irony that amongst the 552 members of the Lok Sabha and 245 members in the Rajya Sabha, we hardly find members whose sons or daughters are serving soldiers?

It is a matter of great pride and honour in many countries including the United States, Russia and China to be a member of the armed forces and serve in public life in later years.

I tried to spot the names of the soldiers martyred in Tuesday's terrorist attack in Nagrota in at least eight newspapers. None mentioned their names, leave aside publish their photographs.

I have seen the same newspapers publish full page interviews with the father of a terrorist who was gunned down in the Kashmir Valley by the security forces. Those interviews touched upon the terrorist's world view, the movies he liked, the heroes he adored, his plans for the future.

None of these newspapers have ever published the pain and feelings of a mother and father of a martyr killed in the Kashmir Valley.

Do we Indians feel any relationship with those who are beheaded on the border, who lay down their lives for the sake of the motherland and the Constitution?

Does it make our blood boil to see such savage acts by a dehumanised neighbour?

Give me one city and one party who will hang the photographs of these soldiers who laid down their lives for the nation in their party offices and conventions.

You have to be a non-uniformed hero, a great scholar and a great casteist vote-catcher to get the honour and attention from those politicians.

It is anybody's guess how many top bureaucrats, parliamentarians and public leaders can name even one hero awarded the Param Vir Chakra.

On November 25-26 we held a function to honour martyrs and soldiers in Dehradun. We were greatly thrilled and honoured to have a real hero -- a Param Vir Chakra decorated soldier -- amongst us. Naib Subedar Sanjay Kumar of the 13 JAK Rifles, who was given thunderous applause indeed. Not many knew he currently serves in Dehradun.

In other countries he would have been adored, saluted and a social hero in his city. His life, actions and thoughts about the country would have been included in local schools and his presence in any social gathering would have electrified the audience.

We simply focus our attention on where we can get votes and those who get votes become our heroes.

We have learnt to live with the daily news of our young, dedicated, dreamy-eyed, boys dying fighting against bloodthirsty animals whom the media and State apparatus calls 'insurgents', 'separatists', 'militants', 'Naxals' and 'Maoists.'

Their deaths doesn't shock us anymore.

Their killings don't create pandemonium in Parliament any more.

No one is interested in discussing these issues any more.

No one insists that a new session of both Houses of Parliament must begin by paying homage to martyred security personnel.

I raised the demand in the Rajya Sabha and almost the entire House agreed with me. Later Defence Minister Manohar Parrikar is said to have endorsed the idea in a communication to the chairman of the Rajya Sabha.

We saw the House beginning with homage to jawans in the session immediately after I raised my demand. Later no one pursued it.

We pay homage to film stars and former members of the House and people who may have died in a plane crash somewhere in the world or fallen victim to natural disasters. But we are hesitant to pay homage to the soldiers who died to save our nation.

We were proud when the prime minister in a speech told us, '...honour and respect soldiers who lay down their lives guarding the borders and ensure that the country sleeps peacefully at night.'

'Often in foreign countries, when sitting at airports or railway stations we see that soldiers are given a standing ovation by civilians even when they just pass by. Seeing three to four soldiers walk by, people stand up and applaud them.'

'Can we make this effort slowly and develop a tradition to show respect to our defence forces? These are small factors but make a huge difference in our lives and soldiers' lives.'

This is the time to create a new mindset, a new attitude to respect and salute our bravehearts.

Let us all make sure that our offices, airports, schools and universities display portraits of Param Vir Chakra decorated soldiers. That we honour local heroes from the armed forces and include the lives of the martyrs in school curricula.

Both Houses of Parliament must make homage references to the martyred soldiers before the beginning of each session.

Small steps, as the PM said, will go a long way to create big changes.

These are needed because a soldier is not a number in your analytical statistics, but a living symbol of our nationhood.

In a nation short of heroes, let's celebrate a real one
The soldier who became a legend 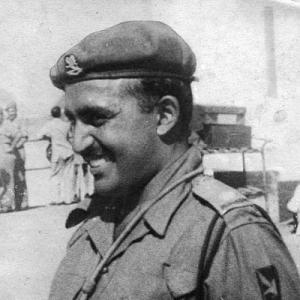