K P S Menon (Junior) had a quiet humility and playfulness, and was not motivated by money or power, recalls Ambassador M K Bhadrakumar. K P S Menon (Jr), the former foreign secretary (external link), passed away on September 28. He chose Thiruvananthapuram in the deep south for his departure, as far away as he possibly could from the byzantine world of the Indian capital. Was there a deliberateness in that decision? I suspect so.

When KPS (Jr) was retiring from the foreign service, he was offered a post-retirement job, which ordinary mortals would have found irresistible.

But he politely declined, arguing that he had already booked a ticket long back to travel to Madras by the Grand Trunk Express to settle down in that ancient city.

He was firm in his determination and clarity of mind that when you retire from government as a public servant, well, you actually retire.

Many bureaucrats seek post-retirement jobs and like retreaded tyres keep going until rudely cast aside. Some do extraordinarily well for themselves. But KPS (Jr) was exceptional.

It spoke a great deal about the man and his values. His great asset was that he was a self-confident man who had no insecurities or complexes and there was no angst in his mind to prove himself or to outperform someone else.

There was a touch of stoicism about it insofar as he literally practised what the Bhagavad Gita says, 'You have a right to perform your prescribed duties, but you are not entitled to the fruits of your actions.'

I am saying this, having had the opportunity to observe KPS (Jr) from close quarters for a full week when in his capacity as the foreign secretary, he accompanied then President Ramaswamy Venkataraman on a State visit to the then Soviet Union in 1988. It was a week-long tour that took us to Siberia, Lake Baikal, Ulan Ude and Central Asia.

I was attached to the president's delegation as the press counsellor and over breakfasts and lunches and dinners or simply sitting around in the lobbies of Soviet dachas, KPS (Jr) had all the time in the world to let his hair down and talk freely of mice and men with a felicity of expression laced with an impish sense of humour. He may have seemed taciturn by nature, but was a gifted raconteur.

KPS (Jr) had great mastery over the art of making understatements that invariably took time to yield their mystery and sink in deep in the attic of memory.

I never once saw him hurrying or being intrusive and agitated. If life moved on without him, well, so be it, he was only happy about it. There was no exaggerated sense of self-importance in his mind that he was indispensable.

From what I could gather, left to himself his preference was to retire from abroad as a diplomat. But then, in an unprecedented personality clash, then prime minister Rajiv Gandhi summarily removed the incumbent foreign secretary A P Venkateswaran, an extraordinarily cerebral personality(external link) with an incisive mind and well-formed opinions -- and above all, an assertive personality -- who was a Titanic figure for an entire generation of foreign service officers like myself. We adored him, his razor-sharp intellect, erudition and wit to match.

Venkateswaran's undoing was that he couldn't stand mediocrities and he was blase about the dangers in displaying it.

To my mind, Rajiv Gandhi, who had an average mind, probably felt insulted at some point and told the media about his intentions to sack him without even taking him into confidence. When APV heard about it, he put in his papers in the best traditions of the civil service.

Of course, Rajiv Gandhi was surrounded by courtiers who would have played their part in the sordid affair. But to cut a long story short, when the search began for a replacement as foreign secretary, the choice almost instinctively fell on KPS (Jr).

From Rajiv Gandhi and his courtiers' perspective, it was a safe choice -- a foreign secretary who can be trusted to be passive.

In retrospect, it was a watershed moment in the history of the Indian Foreign Service. The breed of assertive, opinionated foreign secretaries in post-independent India vanished overnight when A P Venkateswaran quit.

Since then, many foreign secretaries have come and gone, and in the ultimate analysis, their ability to make contributions to foreign policies was directly proportional to their proximity with the PM.

A few were successful, but many ended up as time-servers, and most of them with an eye on their post-retirement life.

In fact, if I am not wrong, except for a clutch of noble exceptions, no ex-foreign secretary followed the footfalls of KPS (Jr) to go into full-time retirement to prepare to walk into the sunset.

KPS (Jr) had a quiet humility and playfulness, and was not motivated by money or power. I never saw him in expensive clothes. That is a lot to say, because much of his life he was surrounded by people striving for the trappings of wealth.

The sort of reflective humanity that he symbolised is certainly not in vogue in the foreign policy bureaucracy today, where the company culture is cut-throat and competitive, and nice guys come second.

But then, perceptions of success are always relative, isn't it? To my mind, real success in life lies in not feeling less wealthy around one's richest neighbours, or less intelligent around one's smartest colleagues or less attractive around beautiful colleagues.

In sum, the widely held view that success is zero sum is a zany idea. KPS (Jr) epitomised such a value system.

How diplomacy works in the digital era 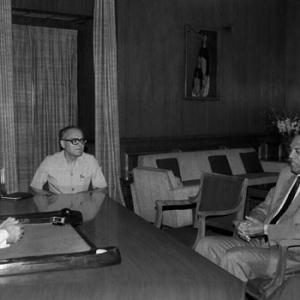