'Ne Win kept good relations with the Nehru family even though he did nothing to do business with India.'

'When Indira Gandhi was assassinated, Ne Win took off to an undisclosed destination, leading to rumours that he had gone to India.'

'But we had no knowledge of his visit and days later, we were told that he was so struck with grief that he went into meditation on an island.' 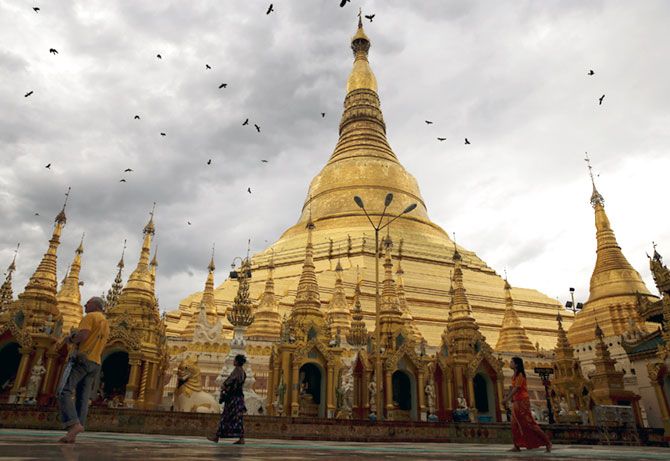 The designs in a kaleidoscope change at every turn in most unpredictable ways. No design is permanent and no two designs are the same. Such has been the fate of Burma, now known by its ancient name, Myanmar.

Even in the seventy years of independence, the design has changed many times beyond recognition. It is again in a cusp of change, as the world watches with bated breath.

Aung San Su Kyi has already won a convincing victory and she believes that she will lead the country, even if she cannot be president till a constitutional amendment is made. One never knows whether another design will unravel and throw the country into uncertainty again.

If anyone wishes to gaze into the crystal ball and predict the future, there is a pathfinder in the scholarly tome by Rajiv Bhatia, India-Myanmar Relations. Changing Contours (Routledge). After years of living in Myanmar, studying it and researching on it, he has attempted to decipher the several designs in the kaleidoscope.

His travels in Myanmar were not just on planes, but 'in the company of a variety of thinkers, travellers, scholars, authors and leaders, who studied, reflected and wrote about this country.'

No wonder it has twelve pages of bibliography and forty pages of notes, a testimony to the Herculean task he undertook to write the book. The result is an authentic study of a mysterious country, which has baffled the world.

I remember the shock treatment that Burma gave to the Nonaligned Movement in Havana in 1979. Some time in the middle of the night of the general debate, the Burmese foreign minister was invited to speak after a lengthy speech by an African leader.

Normally, the rule in the Movement is that the smaller the country, the longer the speech. Delegates went out for a walk or settled down to a nap, thinking that Burma would have nothing to say.

As the junior most delegate from India, I was glued to the earphone not to miss the Burmese wisdom. What shook up everybody was that the minister finished his speech in precisely three minutes.

When he returned to his seat, everyone in the Indian delegation turned to me to find out what he said. I told them that Burma had just left the Movement as it had ceased to be of any value to Burma. He said that Burma was too nonaligned to be in the Nonaligned Movement!

The Movement took it in its stride and moved on till it came back to a session in Bali asking for re-entry. Under direct instructions from the prime minister, we blocked their return on the ground that the elected leader was denied power.

Burma was, in 1979, in the second of the four phases Bhatia has identified, first, the U Nu era, second, the Ne Win Years, the third, the transition period and the fourth, Than Shwe rule.

Ne Win was in the same class as Pol Pot and Kim Il Sung in that he reduced a fairly prosperous Burma into a bankrupt and isolated country through his Burmese Way to Socialism.

Golf was the only effective diplomatic instrument at that time as the golf course was the only place where we could speak to the Burmese officials. It was a good alibi for me to take lessons in golf, which turned out to be a passion in later years.

Every year, diplomats were invited to the special army golf course, where Ne Win played. The Burmese repeated their golf jokes and laughed loudly on the 19th hole, giving an impression of camaraderie, but without any business being transacted.

'My wife is my handicap!' was the most popular golf joke in Burma!

Ne Win's actions, which led to an exodus of nearly 100,000 people of Indian origin during 1963-1964, are covered in the book. Since then, it was an uneasy calm without substance in India-Burma relations during my time (1983-1986) and all our efforts to give some content was rebuffed.

We imported rice from Burma to please them, the commerce secretary visited Burma, we flooded Rangoon with cultural programmes to which the local Indians and Burmese came in large numbers, but the relations remained static.

The diplomatic community kept itself amused by golf and staging of plays like Charlie's Aunt and The Thwarting of Baron Bolligrew in the British embassy. About forty Burmese families, who were assigned to enjoy diplomatic hospitality, filled our parties to add the local touch.

As Bhatia has noted, Ne Win kept good relations with the Nehru family even though he did nothing to do business with India. When Indira Gandhi was assassinated, Ne Win took off to an undisclosed destination, leading to rumours that he had gone to India. But we had no knowledge of his visit and days later, we were told that he was so struck with grief that he went into meditation on an island.

Then came the indication that he wanted to visit Delhi to express his condolences to Rajiv Gandhi and family. He was very warm and affectionate to Rajiv Gandhi and told him that as his 'uncle,' he would do everything possible to help him and raise the level of India-Burma relations.

On my return after the Ne Win visit to Delhi, I spoke with optimism about a new phase in bilateral relations to the diplomatic corps and the press.

My joy was short lived as the initiatives I took after Ne Win's visit were rebuffed as before. His policy of dealing only with 'third countries' (other than big powers and neighbours) continued with the exception of China, which built up its contacts with generous gifts and the support of the Burmese Communists.

The military dominated kaleidoscope had remained unchanged when I left Burma in 1986 for a more exciting time in Fiji.

I remember discussing Burma with the then prime minister of Fiji, Ratu Mara. He was astonished that the people of Burma had lived under authoritarianism except for a little trouble when the body of U Thant, the secretary-general of the United Nations, was brought to Rangoon.

I thought aloud that it could be because Buddhism might have given the people a sense of resignation to their fate. Ratu Mara suddenly perked up and said to me conspiratorially, 'Why don't you take back all these Hindus from Fiji and send me some Buddhists?' My reaction was a grim smile.

Bhatia is at his best when he describes the state of affairs in Burma, Myanmar now, when he was in Rangoon, now Yangon. The years between 1987 and 1992 have been characterised as transition years, but they were the years of uncertainty, violence and efforts of the army to present acceptable faces after Ne Win resigned.

After the advent of Than Shwe rule, the same P V Narasimha Rao, who blocked Myanmar from re-entering the Nonaligned Movement, decided to start a constructive engagement policy with Yangon.

The author himself steered the new policy as ambassador and the book has the details that no one else could have. The book contains a blow-by-blow account of the events in India-Myanmar relations, leading to a new understanding with the junta, with the reluctant acceptance of Aung San Suu Kyi.

Incidentally, her sojourn in Bhutan had coincided with mine and I did not see any indication of her steely determination at that time.

The complex India-Myanmar-China triangle is adequately covered in the book. Though the general perception is that it is a zero sum game, the author argues that this need not be so.

He is over optimistic about Myanmar seeking diversity in relations by cultivating India and believes that the new Chinese initiatives in the region will reduce the impact of the China factor and provide new opportunities for the three countries. Given the adversarial Chinese position towards India, I would not endorse the author's view.

The state of the remaining people of Indian origin, particularly the farmers, who were requested to stay back when the others left, is a matter of shame.

The author speaks of their warmth towards the Indian ambassador, but not about their grievances. They are virtually State-less and treated as foreigners. They cannot eat even the rice they themselves produce as it is taken away. India generally closes its eyes to the problem to avoid an irritant in bilateral relations.

As was said about Milton's Paradise Lost, Bhatia's scholarly work has to be read as a duty rather than as a pleasure, because the ordinary reader has to steer clear of the mountains of information that come in the way of a smooth passage through the text.

But his admiration for the country is based on his deep understanding of it, which he shares with the readers. When the Myanmar kaleidoscope turns again and a new image appears, we will certainly go back to the book for the insights contained in it to decipher it.