Nazarwala, who predicted a triple century for the BJP in the UP elections, lists the challenges that await the new chief minister. 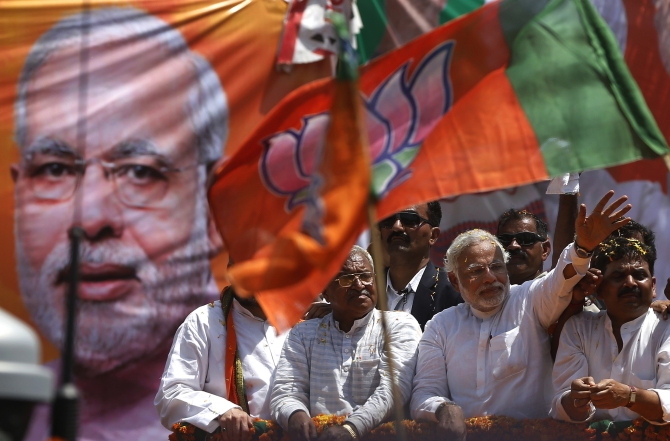 As I predicted, the vanvaas for the Bharatiya Janata Party has ended in Uttar Pradesh with it scoring a triple century in the assembly elections.

The BJP in UP now faces very tough governance issues, maintaining law and order being the biggest challenge.

The new chief minister will have to clean up the mess created by the previous Samajwadi Party and Bahujan Samaj Party governments.

Brazen appeasement of Yadavs and Muslims was rampant during the previous governments. Yadavs flooded the ranks in the police and other vital administrative wings.

The state public services commission, which recruits gazetted police officers and civil servants, earned a bad reputation during the period.

Goons and mafia have dominated the scene in UP for far too long. Mayawati contributed her share by harbouring mafia don Mukhtar Ansari.

Currently, the public perception is happy and fresh, and relishes all those rosy promises made by BJP President Amit Shah.

The restless public, nonetheless, needs to experience peace, safety and a sense of security in UP. Expectations of the common man have undergone a paradigm shift -- to a new 'normal'.

The discipline and morale of government servants had also been systematically shattered.

Coupled with these is the even more dangerous communal challenge.

Miscreants and fomenters of the communal virus are likely to exploit even insignificant incidents/issues to spread unrest.

It is a misfortune of the BJP that it has the image of being a 'communal' party.

Who has suffered this more than Modi and Amit Shah?

Something drastic and effective will have to be done by the new CM in UP, and that too quickly.

Else, those defeated politicians of all parties will pounce upon him and the PM.

Moreover, the current goodwill generated by Modi inthe BJP's favour shall evaporate months before D-Day in 2019.

Reputations of erstwhile ministers Surya Pratap Shahi, Lalji Tandon and their ilk threaten to pose another problem. The conduct of Kalyan Singh and Kusum Rai has been forgiven, though not forgotten.

Any lapse or misalliance in the BJP team will result in fingers pointing at the central leadership.

The need for Centre-like tightening of the bureaucracy is a greater challenge which will test the character and calibre of the new CM.

Having cried hoarse against the 'goonda raj' and 'bhrashtachar' (corruption), the BJP is now expected to guarantee an honest and efficient administration.

Job creation on a visibly massive scale is one panacea which the teeming unemployed youth are looking forward to.

Muslim women are enthused by the BJP's triple talaq stand.

Atiya Sabari from Saharanpur, who had approached the Supreme Court challenging the triple talaq given on a piece of paper by her husband, and many others in similar plight, have voted for the BJP. They are all pleasantly surprised on getting support and empathy from unexpected BJP quarters.

Therefore, they anxiously look forward to some more tangible steps and relief. They hope Modi won't disappoint them.

This move holds tremendous potential of expanding the BJP's Muslim vote base.

The BJP will ignore some of these exuberant expectations in UP at its own peril.

MORE MUST READ features in the RELATED LINKS below...