'Why not simply make some more ventilators and find some more beds? How much would it cost?' asks Ambassador M K Bhadrakumar. 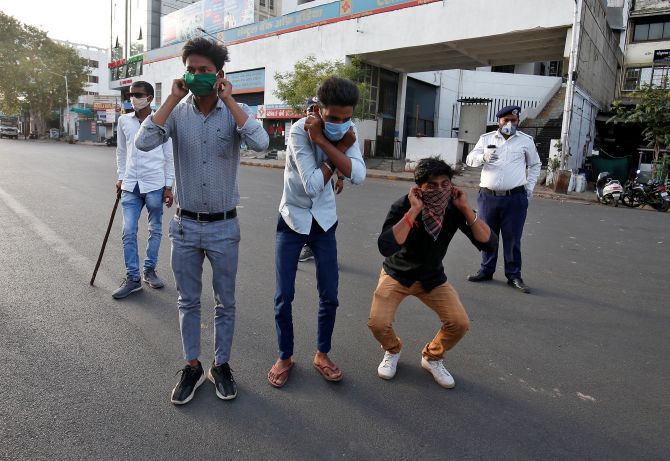 IMAGE: People hold their ears while doing sit-ups as a punishment for breaking the lockdown in Ahmedabad, March 24, 2020. Photograph: Amit Dave/Reuters

Even as Prime Minister Narendra Damodardas Modi was addressing the nation on Tuesday, March 24, announcing a total lockdown in the country, Brazil's President Jair Bolsonaro also took to a televised address to dismiss such health measures against coronavirus as 'scorched earth' tactics.

Bolsonaro is a familiar face to Indians -- a good friend of Modi who invited him as the chief guest at our Republic Day celebrations in January.

Both are far-right politicians and yet their attitude to coronavirus is diametrically opposite.

Almost one-fifth of mankind has been put under lockdown.

Modi said, 'To save India and every Indian, there will be a total ban on venturing out.'

According to Modi, coronavirus has the potential to 'spread like wild fire'.

He said, 'You must remember that you will invite a grave pandemic like coronavirus to your homes if you step out.'

Bolsonaro, on the other hand, rubbished the efforts to contain coronavirus with large-scale quarantine.

Dismissing coronavirus as a 'media fantasy' and a 'trick', he said calmly, 'The virus has arrived and we are fighting it and soon it will pass.'

He repeatedly called on authorities in his country to abandon their scorched-earth ideas.

Bolsonaro urged his countrymen, 'Our lives have to go on. Jobs must be kept... we must, yes, get back to normal.'

He added, 'What is happening around the world has shown that the at risk group are those over 60 years old. So why close schools?... Ninety per cent of us will show no sign (of infection) if we are infected.'

Of course, while Modi has risen in stature as a 'strong' leader, Bolsonaro's address went down badly with his critics.

Compare it with what an Indian television anchorman wrote on his Tweeter page: 'PM at his emphatic best in address to the nation tonight. Realistic. Forceful. Passionate... has done as good a job as can be done...'

Which side of the Modi-Bolsonaro divide is rational is difficult to estimate at this point since this is a story in progress.

To borrow the words of former US secretary of defence Donald Rumsfeld when asked at a Pentagon briefing in 2002 about the lack of evidence linking Saddam Hussein to terrorist groups, 'Reports that say that something hasn't happened are always interesting to me, because as we know, there are known knowns; there are things we know we know. We also know there are known unknowns; that is to say we know there are some things we do not know. But there are also unknown unknowns -- the ones we don't know we don't know. And if one looks throughout the history of our country and other free countries, it is the latter category that tend to be the difficult ones.'

Interestingly, a study on covid-19 has just been completed by a British team of scientists led by Sunetra Gupta, professor of theoretical epidemiology at Oxford.

It suggests that the coronavirus was already circulating in the UK by mid-January, around two weeks before the first reported case.

The study found that less than one thousand of people with covid-19 became ill enough to need treatment in hospital, with the vast majority developing mild symptoms or none at all.

Which, of course, means that since the virus had enough time to have spread widely, many people in the country acquired immunity.

In an interview with the Financial Times, Professor Gupta said, 'I am surprised that there has been such unqualified acceptance of the Imperial model (read UK Prime Minister Boris Johnson's decision on a lockdown)'.

Her thesis is expected to be put to testing later this week.

If confirmed, Professor Gupta's results would mean that Britain has already acquired substantial 'herd immunity' through the unrecognised spread of the illness -- meaning, coronavirus will stop spreading when enough people have become resistant after being infected.

The implications are profound.

For, it means that the shutdown across the UK could be removed much sooner than expected.

Importantly, those who died were between 33 and 103 years old and all were in vulnerable groups with underlying health problems.

Modi's lockdown is even harsher than Johnson's who announced that British people should only leave their homes for four reasons: to shop for essentials, for one form of exercise per day, for medical need or to provide care to a vulnerable person and travelling to and from essential work.

Modi insists coronavirus is lurking right in front of our doorstep.

Simply put, it poses a tricky question: Does the mathematics of a virus with a mortality rate of roughly 1.5 percent justify quarantine that is sure to inflict an unimaginable economic carnage?

But politicians, including those who prided to be strongmen, tend to play it safe when faced with decisions of seismic implications.

The heart of the matter is that short of a miracle -- a vaccine is rapidly developed, mass-produced, and distributed; the virus dies in the scorching heat of Indian summer; or God intervenes, as in the H G Wells novel War of the Worlds -- coronavirus is not a genie that will be easily put back into the bottle.

We must, therefore, understand the gravity of what is before us as a nation.

The choice is between remaining quarantined indefinitely and accepting social, economic, and political Armageddon or to take special care to protect the vulnerable and for others to get back to work, knowing that many will, in any case, die.

The BBC featured an article (external link) recently by its health and science correspondent James Gallagher asking that million dollar question: When will the outbreak end and life get back to normal?

Gallagher wrote: 'Even if the number of cases starts to fall in the next three months, then we will still be far from the end. It can take a long time for the tide to go out -- possibly years. It is clear the current strategy of shutting down large parts of society is not sustainable in the long-term.'

'What countries need is an 'exit strategy' -- a way of lifting the restrictions and getting back to normal. But the coronavirus is not going to disappear. If you lift the restrictions that are holding the virus back, then cases will inevitably soar.'

Indeed, what could be an 'exit strategy'? Gallagher listed essentially three ways out of this mess: Vaccination; enough people develop immunity through infection; or permanently change our behaviour/society.

He concludes, 'Each of these routes would reduce the ability of the virus to spread.'

But coronavirus is 'not going to disappear' and the current strategy of lockdown is not sustainable in the long term, since the social and economic damage would be catastrophic.

We need to figure out a way of easing out restrictions and getting back to normal life.

What is happening is that we are indefinitely destroying our basic freedoms because of a projected acute shortage of ventilators and hospital beds.

Why not simply make some more ventilators and find some more beds? How much would it cost? I would imagine, a fraction of the Central Vista Project (external link) in Lutyens's Delhi?