Those debating over these two words remain woolly-headed about their meaning and contextual relevance, observes Mitali Saran. 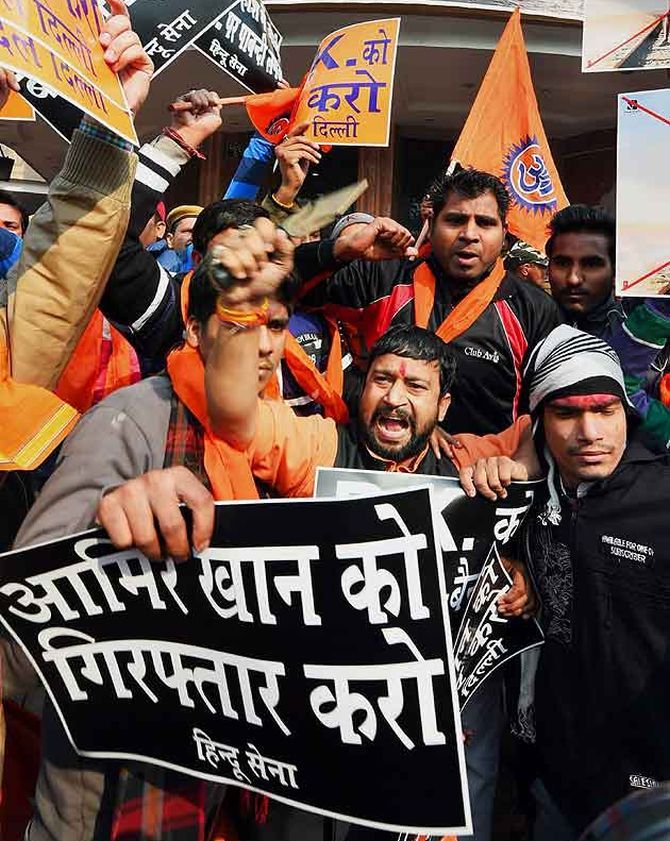 Hindu Sena members protest against Aamir Khan over his remarks on the growing intolerance in the country. Photograph: PTI

You know how, if you stare at or repeat a word long enough it suddenly grows a horn and a third eye and becomes unfamiliar and meaningless? That’s happening to the words ‘tolerance’ and ‘intolerance’, the subjects of a two-month national screaming match. The discussion has been so intense that the Bharatiya Janata Party went through the five stages of political grief -- dismissiveness, anger, defensiveness, clumsiness, and conciliation -- and finally even Parliament had a bash at it. Many fine words were spoken, and everyone agreed that tolerance is a good and necessary thing, yet implied that everyone else is intolerant.

But for all the passionate engagement, everyone from Arnab ‘The Nation’ Goswami to the lowliest hashtag warrior remains woolly-headed about their meaning and contextual relevance. Two perfectly good words have come to be loaded beyond their load-bearing capacity. Forget, for a moment, whether India is or isn’t tolerant. There’s nothing funnier than watching serious people on TV, eyes red and popping, shout ‘Tolerate me! Where is your tolerance! Be tolerant!’ because someone interrupted them. ‘Be polite and let me finish,’ would be relevant and accurate, but intolerance has become the scarlet letter that nobody wants on their own forehead, so they just duck the shot and fire one back. It’s like running around playing #intolerance paintball.

It might be useful to think of three kinds of tolerance: personal, legal, and societal, in that order of increasing importance, relevance, and impact.

The personal is a matter of temperament and opinion. Every individual is a montage of legitimate choices and biases. One might plump for a Hindu India and another might call that stupid bigotry. One might be verbally abusive and the other might call that offensive and stupid. But to use the word ‘intolerant’ is to ascribe a personality trait to them, like ‘lazy’ or ‘neat freak.’ It’s a nothing term. Use it, by all means, but know that it doesn’t mean ‘anti-national’ or ‘illegal’.

You can hate dirt, or people who drink, but as long as you let live in a pigsty and drink, you aren’t being #intolerant. People who walk away from discussion might be infuriating and stupid. But they aren’t #intolerant. If you find something ‘intolerable’, you can express that non-violently, and in return, other people are free to choose whether to indulge your preferences or not.

Personal tolerance is too varied for everyone to agree on. That’s the whole purpose of law: to protect the right to varied choices. This is where things get real.

You become legally #intolerant when opinion turns to violent action, when you express your prejudices violently, or incite such violence, upon other people or their property. You are free to viscerally fear and hate the colour purple, write op-eds about its vileness, march in protest against it, and encourage your children to hate it too, as long as you don’t impinge on anyone else’s right or ability to wear purple.

However, if you threaten or murder someone who is rumoured to possess a purple shirt, that is an intolerant crime no matter what the provocation. When people tell you to go to Pakistan, they are being hysterical morons, not legally intolerant. But when a mob stations itself outside Aamir Khan’s house, it threatens his safety and therefore is intolerant.

The word ‘intolerant’ is most commonly abused by applying it to someone who has hurt your feelings. (I didn’t like what you said or did, and you kept saying or doing it.) But your hurt feelings do not someone else’s intolerance make. Choosing, perfectly legally, not to stand for the national anthem in a cinema is not being #intolerant of the rest of the audience’s feelings. Expressing anxiety about the state of the nation is not #intolerant of the ‘anguish’ of self-professed patriots.

A government that privileges or empowers majority opinion over individual rights will inevitably end up promoting social intolerance. There are also insidious legal ways of curbing tolerance: when Rajasthan drops Ismat Chugtai’s short stories from its school curriculum, it corrals kids into a social comfort zone, rather than helping them to confront, explore, and live with difference. It certainly doesn’t promote social tolerance, which is the ability -- and at its finest, the inclination -- to live non-violently, cheek by jowl with people who make different choices. Luckily we have a system in place to allow people to compete for the kind of climate they prefer to live in: it’s called democratic election.

Meanwhile, here’s a fervent appeal to our talking heads: quit throwing ‘tolerance’ and ‘intolerance’ around like confetti. It would make this whole debate more tolerable.