Remains of the day as India exits lockdown

'This is a critical story that Modi seems to grasp far better -- almost instinctively -- in comparison with most of his predecessors as prime ministers,' notes M K Bhadrakumar. 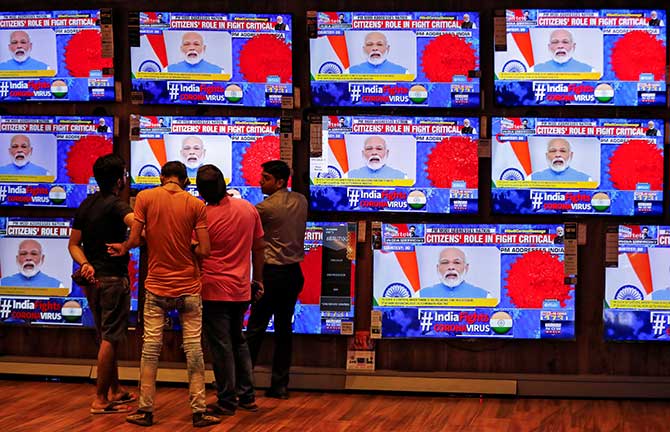 The national directives for COVID-19 by the Union home ministry that come into force across India on May 18 mark a defining moment.

The country has successfully navigated a challenging period.

The Chinese philosopher Confucius once said, 'Success depends upon previous preparation, and without such preparation there is sure to be failure.'

The nationwide lockdown, which is entering the last phase, has been optimally utilised as 'previous preparation' to put in place a Maginot Line.

Now, the invader may outflank it and the line of defensive fortifications may be inspiring a false sense of insecurity only.

The efficacy of the concrete fortifications, obstacles, and weapon installations will depend on the tenacity and resilience of the defenders as much as the guile and unpredictability of the medieval virus.

Nonetheless, in life, it is better to be contented over something than to have nothing at all. 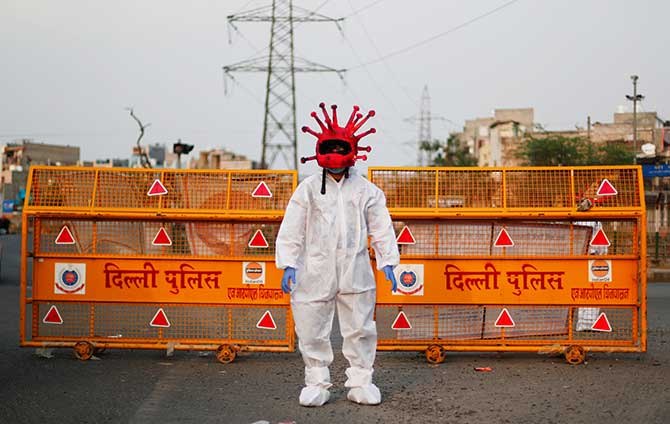 IMAGE: An artist wearing a coronavirus-shaped helmet and a protective suit stands next to a police barricade as he requests people to stay at home in New Delhi, April 30, 2020. Photograph: Adnan Abidi/Reuters

Fifty-five days ago from today, Prime Minister Narendra Damodardas Modi had said, 'Draw a Laxman Rekha outside your door and remember that even step outside of it will bring coronavirus into your house. Corona yaani koi road par na nikley.'

Today, it seems light years away when Modi invoked the stunning metaphor from the ancient epic of Ramayana to stir up archetypal passions in the Indian collective consciousness.

But on May 12, Modi has urged the people, in his latest address to the nation, 'Corona is here to stay... But we cannot let our lives be controlled by corona. We will have to live with it. We will wear masks and maintain physical distancing but not give up on our dreams.'

This profound transition in the official thinking from abhorrence to co-habitation with the virus through a 8-week period underscores the success of the government's lockdown strategy.

The period of the lockdown helped on the one hand to slow down the pandemic while on the other hand to strengthen the healthcare system in anticipation of any likely spike in the spread of infection in the period ahead.

Above all, it also brought a keen sense of awareness of the pandemic to every Indian's day-to-day life -- urban or rural, literate or illiterate, rich or poor.

Which is also half the battle won. 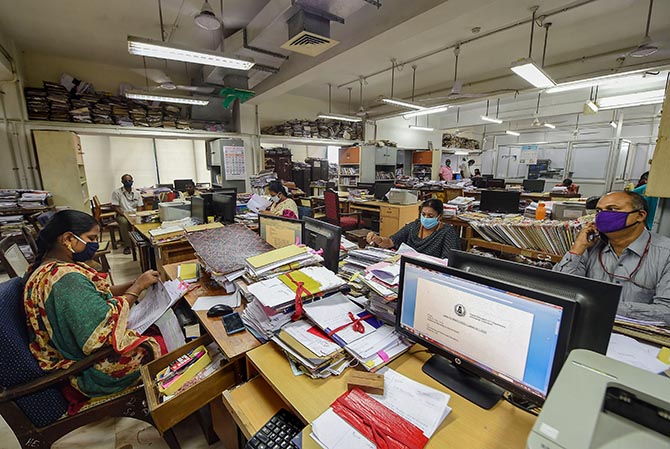 This success has emboldened the government to incrementally shed the restrictions imposed during the drawdown.

The latest national directives by the home ministry mark a turning point with daily life trotting toward an appreciable degree of normalcy for the citizens but with constant reminders that a 'new normal' has come to prevail not only in India but the world at large.

Meanwhile, an unprecedented economic package has been unveiled to provide underpinnings even as the economy is being kickstarted after several weeks of hibernation.

In comparison with the rest of the world, the government adopted a unique strategy to combat COVID-19 -- a strategy with Indian characteristics.

It is not only that democracy and federalism proved superior, but also testifies that where several (or most) functioning democracies failed, including in the cradle of democracy in modern history, India came up with an innovative narrative.

The lockdown was rigorous but not draconian. 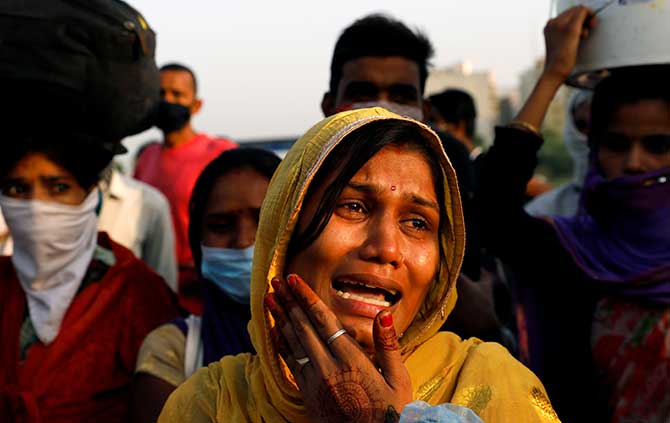 IMAGE: A woman weeps as she and other migrants were stopped from crossing the border, New Delhi, May 15, 2020. Photograph: Anushree Fadnavis/Reuters

Importantly, however, as we survey the remains of the day, the lockdown has also thrown into relief historically rooted contradictions in our body politic whose implications can no longer be ignored by the ruling elite.

What I have in mind is the tragic saga of the migrant workers being played out in front of our eyes every day -- signifying a deep-seated economic, political, and social crisis.

The coronavirus is by no means the cause of this crisis, nor is the lockdown; they have rather acted as an accelerant and illuminator.

The economy was already teetering in the pre-Covid era.

What the Covid crisis has done, quintessentially, is that it exposes that in these seven decades of independence, our country has become a plutocracy -- a State and society governed by the wealthy. 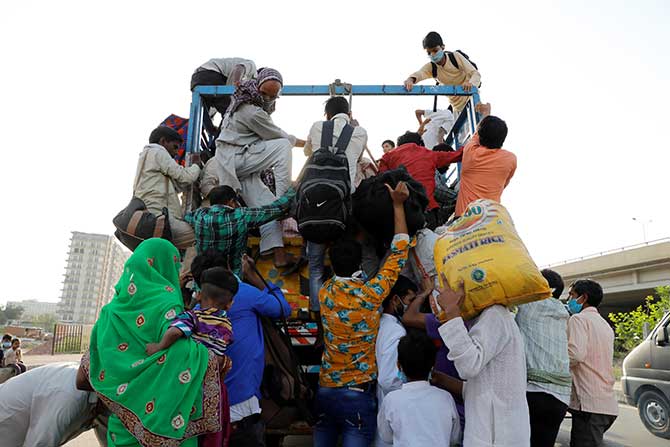 IMAGE: Migrant workers rush with their luggage to board a tempo in New Delhi which would get them across the border to their home state of Uttar Pradesh, May 15, 2020. Photograph: Anushree Fadnavis/Reuters

The migrant labourer has called attention to the unprecedented maldistribution of wealth in our country by appearing at the centre stage of our news cycle for the first time.

But the stunning reality is that he was always there beneath the flyovers and the neon lights, self-effacing and stoical, but hardly anyone noticed his sub-human existence.

This is where the liberal centrists -- and the elites in general -- who through all these decades since Independence are proven better at accruing personal wealth than effecting meaningful political change in our country and are today wearing on their sleeves their bleeding hearts over the plight of the migrant workers, are less than honest or fair in their criticism of Modi.

Yet, the real tragedy is that the odds are great that a course correction will not come quickly.

Although, it also emerges that our country retains substantial social strength and sources of cohesion -- neighbourliness, decency, generosity, and national patriotism -- even while nurturing a deeply reactionary strain that is powerfully ensconced in our body politic.

The coronavirus has powerfully illuminated the weaknesses of our economic and political system that only democratic socialism -- or whatever you want to call it -- could address through a more equitable distribution of wealth and social welfare, science-based national health care and a coherent public health response to the pandemic.

The economic package announced by the government grapples with these issues around the edges rather than attacking them head on, hence scepticism is warranted that the various measures, albeit well intentioned, may not deliver any meaningful change.

But, perhaps, this is not the time to attempt any drastic surgery, either.

The priority should be to cauterise the wounds so that they do not metastasise into malignancy. 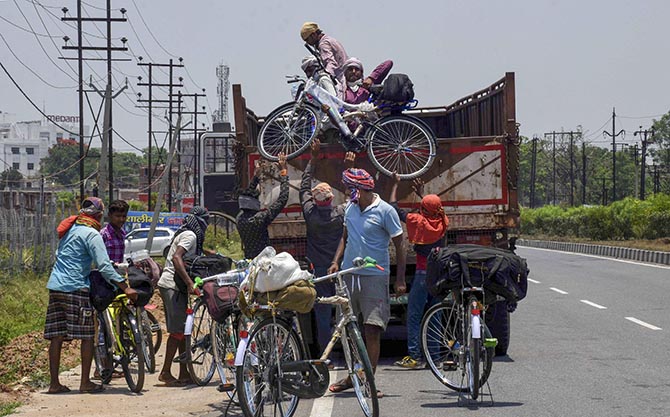 IMAGE: Migrants travelling to their villages load their bicycles on a truck in Ranchi, May 18, 2020. Photograph: PTI Photo

One begins to despair that the legacy of the three decades of liberalisation and the resultant aversion to democratic socialism has become so deep rooted in our current history that a meaningful change may no longer be possible.

But there is also reason to hope that the 'new normal', as the country steps out of the lockdown, will not erase the harrowing images from Auraiya, Uttar Pradesh, on Saturday.

The heart of the matter is that this is also a critical story that Modi seems to grasp far better -- almost instinctively -- in comparison with most of his predecessors as prime ministers.

As the Nobel Laureate Abhijit Banerjee recently pointed out, while Modi began with a pro-business approach, the 'heart of the government' now appears to be welfarist and is to be seen as left of centre in terms of its economic ideology. 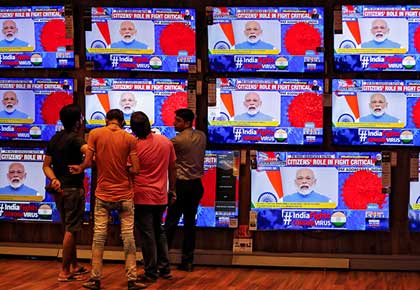