'The BJP must realise that a resurgent Rahul Gandhi will take the battle straight into its camp.'
'He is not going to be held back by the misdeeds of UPA 1 and 2, so there is no point harping on them,' says Sanjeev Nayyar. 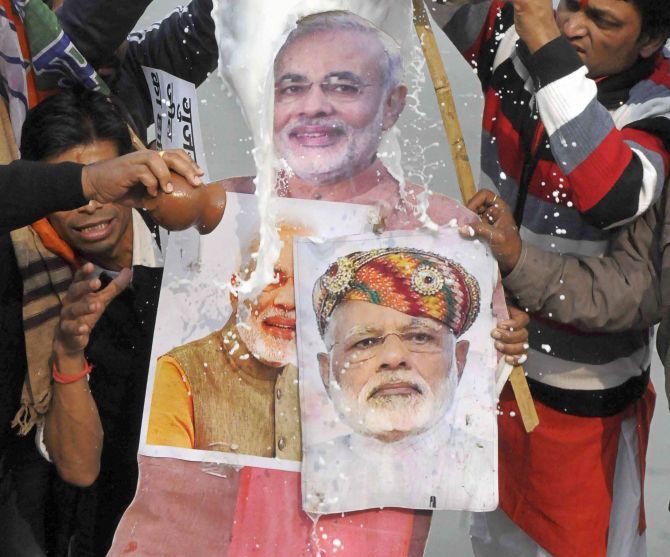 Fighting 22 years of incumbency, discontentment over GST, disgruntled Patidars is no easy task.

To that add a resurgent Congress supported by the trio of Hardik Patel, Alpesh Thakore and Jignesh Mewani.

Even after all these factors going against them, the Bharatiya Janata Party just about managed to retain Gujarat.

And it is the Congress that has actually emerged as the real winner.

Rahul Gandhi, who recently took over the reins of the Congress party, led such a spirited campaign that no one can now call him Pappu, which saw the Congress tally increase from a low of 51 seats in 2002 to 77 in 2017.

So what went wrong for the BJP?

One, every election since 2002, was fought on the consolidation of the Hindu vote by the BJP, whether it was Godhra in 2002 or statements by Congress leaders like 'maut ka saudagar' (merchant of death) in 2007.

However, this time, the Congress changed the rules of the game.

First it split the Hindu vote by supporting the Patidars, Thakore's OBCs and Mewani's scheduled castes.

Next, it did not woo the Muslim community publicly or make any pro-Muslim statements.

This way the large-scale consolidation of Hindu votes was prevented by them.

The BJP saw through the game, even though a bit late in the day. Hence, Prime Minister Narendra D Modi made statements like Ahmed Patel becoming chief minister if the Congress came to power, but it was too little, too late.

Two, with a series of questions, Rahul Gandhi put the BJP governments on the defensive. For example: Rahul's questions on performance indicators on nutrition, health, education and unemployment.

He taunted the BJP for not releasing its manifesto and forced them to do so a day before the first phase of polling.

With their chief minister lacking charisma, and a highly centralised campaign, the BJP's response lacked punch.

Three, Rahul Gandhi's visits to temples unnerved the BJP, and it clearly did not know how to respond to this.

Raking up a controversy over why Rahul's name had been entered in the non-Hindu register in the Somnath temple was a trick that would have worked in 2012, but not in 2017.

Four, the deaths of 14 Patidar youth in 2015 during the community's agitation for reservations and the aggressive BJP response alienated sections of the community, who were always the saffron party's vote bank.

Targeting the 23-year-old Hardik Patel with sedition charges and then with an alleged sex video did not go down well either.

These moves by the BJP were more like the Congress of the 1990s and the United Progressive Alliance, and not a party that claimed to be different.

Five, brute display of power during Ahmed Patel's re-election to the Rajya Sabha.

However much Amit A Shah may have been singled out by the Congress or UPA, Patel's re-election was not the time for the BJP president to settle scores.

Income-tax raids on a Karnataka minister and rumours of money changing hands made people perceive that Shah's actions were driven by emotion than reason.

In fact, winning 130 Gujarat seats would have been a smarter way to settle scores with Patel than the abortive attempt to halt his Rajya Sabha entry.

Six, all credit goes to the tireless campaign by Hardik Patel and others.

They connected with the youth and drew large crowds. The BJP simply ad no equivalent local leader.

By depending entirely on Modi, the party's limitations were exposed. By not having a strong state leadership, the BJP is making the same mistake the Congress made earlier.

Seven, the thrashing of Dalits in Una in 2016 was the only such incident reported in recent times from Gujarat.

But the BJP allowed Jignesh Mewani to build a campaign around it as if scheduled castes were being ill-treated all over the state under the BJP.

Where was the BJP's rebuttal? They never spoke about the action taken against the culprits.

Eight, the BJP's failure to anticipate and address rural discontent.

It resulted in the BJP losing 12 seats in Saurashtra-Kutch where the party's tally fell to 23.

All this implied that the BJP's narrative had become stale and it lacked new ideas.

The results have also showed that the Modi-Shah duo can be beatable even in their home state.

Having done exceptionally well in Gujarat, what should the new Congress president's approach be for 2019?

Besides promising development, Rahul Gandhi, who is assured of Muslim votes, must continue to woo the Hindus. Here is what he can do.

This means that the government will not be involved in the management of temples, and donations by devotees will not become part of the state treasury. The funds would be kept in trusts that would be managed by Hindus.

In order to show he means business Rahul Gandhi can make this a part of the Congress manifesto in Karnataka where elections are due next year. If re-elected in the state, he can effect the change in 2018 itself.

Two, run a campaign to define secularism as 'equal treatment for all irrespective of religion'.

The word 'secular' was made part of the Preamble of our Constitution during the Emergency, but the term has been left undefined.

When the Janata Party came to power in 1977, an attempt was made to define 'secular republic' to mean a 'republic in which there is equal respect for all religions'.

The Janata government had a majority in the Lok Sabha but was a minority in the Rajya Sabha where the attempt was voted down by the Congress.

By defining secularism properly, Rahul can make amends for mistake the Congress made in 1977.

Three, for all the noise that the BJP makes, how many Bangladeshis has the government deported?

After assuring Indian Muslims that only illegal immigrants would be deported, Rahul should ask the BJP to deliver on this election promise.

In 2012 the UPA government relaxed restrictions on the entry and stay of foreign missionaries in the country.

These restrictions had been enforced on the recommendations of the Niyogi Commission, appointed to investigate the activities of missionaries in Madhya Pradesh, which submitted its report to the Union government in 1956.

The missionary visa is issued to those going to India 'for a religious purpose'. The creation of a special category of visa for missionaries by the UPA may legitimately be considered as official patronage for Christian conversions in India.

Five, he should apologise for the 2G and Coalgate scams under the UPA and assure the nation that such things will never recur if the Congress came to power at the Centre.

Six, Rahul must lift the fog over his religion. He may have declared his family to be of Shiv bhakts, and visited scores of temples in the recent past, but he has never admitted to what his religion is, fobbing off questions saying it is a personal matter. Don't we have a right to know?

In conclusion, the BJP must realise that a resurgent Rahul Gandhi will take the battle straight into its camp. He is not going to be held back by the misdeeds of UPA 1 and 2, so there is no point harping on them.

The premature India Shining campaign by the National Democratic Alliance contributed to their loss in 2004. Gujarat 13 years later has been kind and returned the BJP to power but its message is to not take its support for granted.

The Modi Sarkar must remember that it was elected not only for vikas, but to correct civilisational distortions that took place under successive Congress governments.

For now, the Gujarat election result calls for deep introspection by the BJP.

Sanjeev Nayyar is an independent columnist and founder of www.esamskriti.com. He tweets @sanjeev1927