'1998-1999 was the only year in the last quarter century that India had net-negative foreign investment.'
'Foreign money ran away from India that year because capital is a coward and does not like uncertainty of the sort produced by such casual treatment of a destructive technology,' says Aakar Patel. 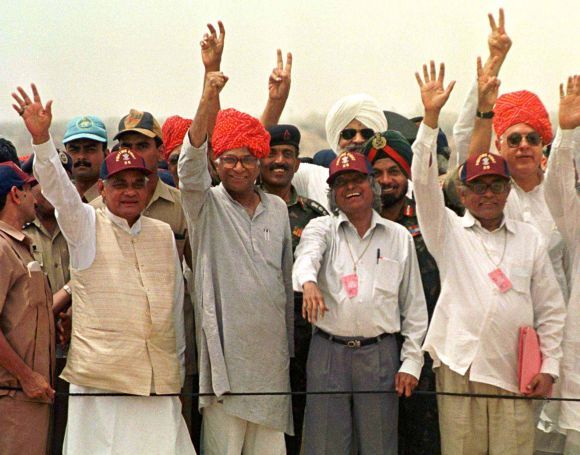 On May 11 and 13, 1998, India conducted five nuclear explosions in the Pokhran range in Rajasthan. This came 24 years after the first test in 1974, also in Pokhran.

Indira Gandhi had then violated the terms under which nuclear technology was imported from Canada and India faced sanctions.

That first test came in a period which was decidedly unstable. China had become a nuclear power 10 years before that, in the mid-1960s, becoming the last of the five veto holders in the United Nations to get an atom bomb.

It was a period also during which much of the world was at war. The United States was finishing a bloody conflict in Vietnam and the Soviet Union's invasion of Afghanistan was five years down the line when Indira tested.

The world was less predictable and conflict more common in the 1970s. During the Korean war, America's top general Douglas MacArthur had threatened nuclear strikes against China and North Korea so casually that even the Americans were alarmed.

This was the background to Indira's tests 44 years ago.

Under Atal Bihari Vajpayee in 1998, there was no such compulsion.

This was the period after the cold war had ended, the Soviet Union having collapsed, and on the cusp of the information technology revolution.

It become clear in this period that Bangalore would lead India to a brave new services-led economic future.

It was a period when the economic rise of nations like Taiwan, Singapore, South Korea and the other Asian tigers proved that power lay in wealth and not weaponry.

North Korea, which was a big military power but with millions of impoverished citizens, only proved this further.

We did not have any debate over the tests in 1998. The Vajpayee government had in fact wanted to test nuclear weapons during its first 13-day government, but an alarmed bureaucracy had said it could not agree to this.

This shows how casually the tests were actually taken. There were celebrations, including firecrackers and sweets, which ensured that there was no debate after the tests either and certain basic questions were neither asked nor answered.

Twenty years later, when the emotion has gone and the issue is now boring, let us look at those questions:

First, did the tests make India a nuclear power? The answer is no.

Indira and India were punished by the world after 1974, denying us access to nuclear technology, precisely because we had violated the earlier terms by weaponising our programme. The 1998 tests repeated that.

Second, did it make India safer? The answer is no.

One year after Pokhran, in May 1999, Pakistan provoked a war in Kargil, in which we lost 500 soldiers. Ten years after that we had the attack in Mumbai.

The most violent phase of the conflict in Kashmir was actually after Pokhran, in 2001, when 4,500 people died.

Third, did it improve our nuclear technology? The answer here is also no.

The Manmohan Singh government made a deal with the United States, but it has not got anywhere.

Fourth, did it raise India's status? The answer is no.

India has long insisted it should be a member of the United Nations Security Council. The nuclear tests did not help us get there. Most likely it harmed us.

Narendra D Modi decided India should be a member of the Nuclear Suppliers Group, but that has not got anywhere either.

Fifth, did it the tests help us produce more electricity because of nuclear technology? The answer is no. India's focus today has become solar rather than nuclear.

Sixth, did it alter the power dynamics of the South Asia region? The answer is no.

Pakistan tested in Balochistan's Chagai region only a few days after Pokhran and today there is a nuclear stalemate on the subcontinent.

We can no longer use our conventional superiority for fear that the conflict will escalate.

China has pushed its economic initiative strongly in our region and today our concern is not its military might but its ability to take away all of our options.

Today Pakistan is actually ahead in terms of the number of nuclear devices it has produced, according to many sources. It is indisputable that it is our action of 1998 that drove them to it.

These were the questions we should have asked ourselves, but did not, in 1998.

Any mature society and particularly a democracy should have debated a move that will have such far reaching consequences. We treated it like setting off a firecracker.

Knowing all this would we still have gone ahead with the tests? I will leave it for the reader to decide. I cannot figure out a single benefit that the tests gave us.

I will point to one significant loss. 1998-1999 was the only year in the last quarter century that India had net-negative foreign investment.

Foreign money ran away from India that year because capital is a coward and does not like uncertainty of the sort produced by such casual treatment of a destructive technology.

The loss to India and its economy from this has not ever been discussed. And as the lack of celebrations on the 20th anniversary show, we have moved on as if nothing happened.