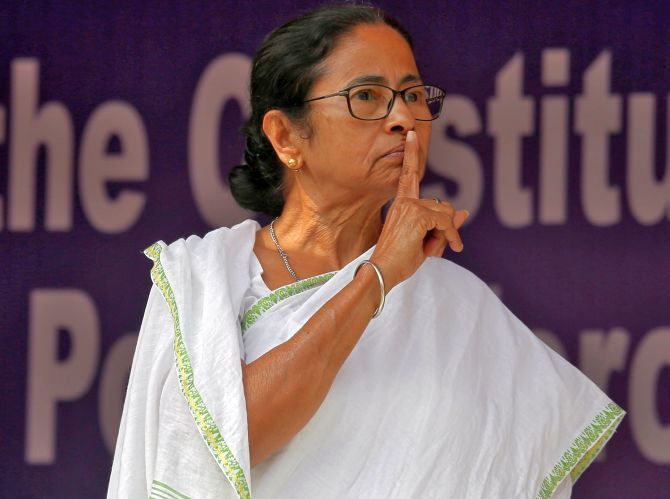 As you would have already guessed it, the big story of Verdict 2019 is not the Modi Tsunami that has swept through nearly all of India, felling all Opposition and slaying political stalwarts in their bastions. The big story is the storming of West Bengal.

Although BJP President Amit Anilchandra Shah kept insisting that his party was poised to strike big in this state, there were few takers for this claim, primarily on account of three reasons.

First, the BJP has no local organisation worth its name in the state and the leadership there is tired and jaded.

Second, West Bengal had shut its doors to the BJP during the high tide of the Ayodhya movement although the party had fielded high profile candidates like Victor Banerjee. A 'north Indian party' was unwelcome.

Yet Bengal fell to the Modi Juggernaut in the most spectacular fashion on May 23.

Once a favoured ally now turned bitter foe, Mamata Banerjee could not stop the BJP from occupying West Bengal, or at least large chunks of it across constituencies. So what went wrong?

Ironically, Mamata Banerjee resorted to the same tactics that had been used by the CPIM-led Left Front, against which she fought a long battle, finally bringing it down, to deny any space to a political competitor.

Her hegemony had to be complete, just as the Left Front's was.

Towards that end she used suppressive means that did little to shore up her image of a dictatorial leader.

Last year's bloody panchayat elections which witnessed the brutalisation of democracy at the village level were meant to push back the BJP with a stern message: Entangle with me at your own peril.

Her language got coarser and cruder. On one occasion, while addressing a public rally, she used a Bengali bazar expression that broadly means to push a bamboo up a person's backside while threatening Amit Anilchandra Shah.

Between last May's panchayat elections and this summer's parliamentary elections, it was a downward spiral as she became increasingly protective of her political base while betraying her ambition to emerge as a national level player.

She held a joint rally with opposition parties and projected herself as an alternative to Narendra Modi at the head of a coalition government in which the TMC would have the largest number of seats.

It is this driving ambition that made her lose all sense of proportion: She had to win all 42 seats in West Bengal at any cost. Meanwhile, she drifted away from the Constitutional obligations of an elected chief minister, refusing to cooperate with central agencies like the CBI and the NIA.

Her public utterances transmogrified into a relentless rant, often bereft of logic and reason.

But all this would have possibly made little or no difference to the outcome of the parliamentary elections had it not been for the reverse polarisation that was set into motion not by the BJP's incendiary identity politics, but Mamata Banerjee's misplaced policy of promoting Muslims over Hindus, simply because in West Bengal they form a sizeable community of a third or more of the state's voters.

She was able to dislodge the Left Front from power by cornering the Muslim vote and adding incremental support to it. She thought that was enough to keep her in power.

What she had not accounted for, and what was missed by most political observers and analysts, is the counter polarisation among Hindus who faced the brunt of assertive Islamisation of society and culture in West Bengal's hinterland.

The Left Front had been able to astutely manage demographic changes caused by illegal immigration from Bangladesh; Mamata Banerjee allowed herself to be unmindful of the consequences of her brazen pandering to Islamism in the guise of Muslim rights. This ranged from offensive orders on Durga Puja celebrations to allowing criminals to run riot in places across the state.

The Bengali Hindu middle classes responded by striking a belligerent posture that till now has been alien to Bengal: 'Jai Shri Ram' and the celebration of Hindus festivals largely observed in the northern states became the counterfoil to Mamata Banerjee's perceived communal bias.

No amount of her chanting Hindu mantras from public platforms could dilute the conviction that she had become inimical to Hindu interests.

The BJP capitalised on this. And history was made on May 23.

This could well turn into the undoing of TMC Raj, just as Singur and Nandigram had turned the tide against the Left leading to the CPI-M's eviction from power.

Between now and 2021, Bengal's politics could change irrevocably.