Instead of its once haloed existence as the year of lofty goals and vision statements, it is now staring at an epitaph that may well read: The year when death ran amok and the gods went missing, notes Arundhuti Dasgupta.
Illustration: Uttam Ghosh/Rediff.com 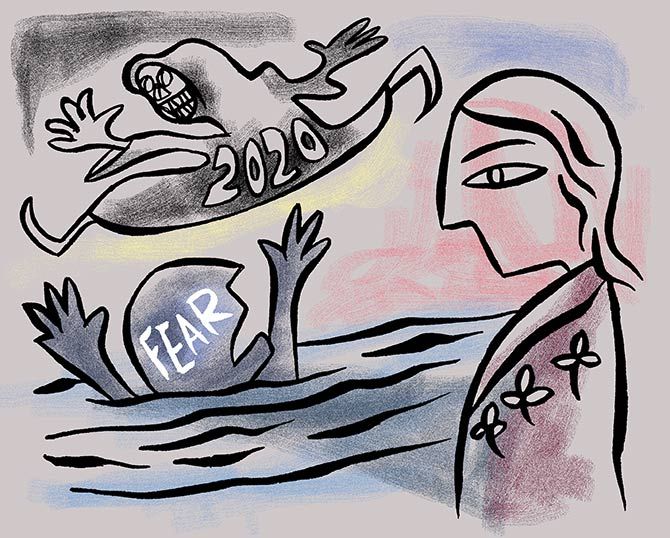 Marauding locusts, earthquakes, cyclones and a killer virus that continues to wipe out thousands of people every day; the year 2020, barely a few months into its calendar, has quickly earned itself apocalyptic status.

Instead of its once haloed existence as the year of lofty goals and vision statements, it is now staring at an epitaph that may well read: The year when death ran amok and the gods went missing.

Nearly every event since the start of the year has marked this out as an end-of-the-world moment.

Be it the manner in which the virus has tightened its grip over humankind, the bizarre turns of weather and the everyday battles against the wanton will of cruel rulers.

Everywhere time seems to have wrapped itself in a strange loop, tossing the routine ordinariness of life into a chaotic snarl.

Myths ascribe many reasons for extraordinary times, linking the despair and devastation (man-made and natural) to the wrath of a god and at times, a missing one.

A Hittite myth talks about the anarchy that follows when one of the major gods goes missing.

Telipinu is the god of agriculture and son of weather god, Teshub, who is the most powerful deity in the firmament.

Slightly bratty, Telipinu is short-tempered and unpredictable. And one day (no one really knows why), he goes into hiding.

The world blacks out in his absence. Nature dries up, famine wrecks kingdoms and no children are born.

Finally, the mother goddess Hannahanna sends out a procession of beasts on his trail. They all come back empty-handed until a bee locates the god and stings him back into action.

The pain (and ignominy) of a bee sting, however, drives the god into a rage and the world slips deeper into the abyss until Telipinu is suitably assuaged by the other gods and agrees to return home and restore normalcy.

Like the bee that came to the aid of the Hittite people, termites were summoned by Brahma to awaken Vishnu, who has often had to be woken up from a slumber to fight demons or save the universe or protect the faithful.

According to one such story (in the Devi Mahatmya), Vishnu dropped into a stupor after a particularly gruelling battle with a set of feisty demons. He slept with his head resting on his bow and none dared to wake him up.

As the universe spun into chaos, Brahma created a hive of termites (vamris) and ordered them to gnaw through the string on which Vishnu's head rested, hoping to snap him out of his reverie.

However, the termites went at it with such force that the string cut into Vishnu's neck and severed it clean.

If a sleeping god spells disaster, one with a missing head is doubly catastrophic. A panicked set of gods appealed to the mother goddess who helped them find a solution, albeit with many twists and turns. Eventually, Vishnu retrieved his head and the world regained its rhythm.

Similar stories about sleeping or absconding gods are found in other mythologies too, as are those about insects that come to the aid of gods and locusts that spread his curse. How does one read such myths in times like these?

Mythology has often posed a problem of interpretation, as its vast web of symbols and metaphors opens up differently to different people.

Some read these myths as stories that foretell doom, while others see these as narratives meant to instil deference for the divine.

The true meaning of myths is never as direct, or simple. Context, culture and geography, all play a role in assigning function and purpose to mythology.

But most importantly, myths about the end of the world, missing gods, flying demons and so on reveal the way early human minds handled fear and calamity.

When nature turned on man, the fear and helplessness caused by such events led to its deification.

When early agricultural societies struggled to protect their crop against pests, rodents and the like, they made them gods or a gods' aide (for example, a regular field pest, the rat is the vahana of Ganesa) or devised elaborate rituals around their elimination.

In Albania, where fields were often ravaged by locust swarms, women would assemble with dishevelled hair, catch a few of the insects, march to the nearest river to drown the creatures and then sing dirges in their memory (J G Frazer, The Golden Bough).

Sometimes fear can be beaten back by standing up to it, jointly, or drowning it in the nearest pool of water.