Chewang Dolma, who retired as a matron from a government hospital in Leh, had joined a crowd of jubilant people in the streets of Leh on the day the Centre announced a Union territory status for Ladakh. 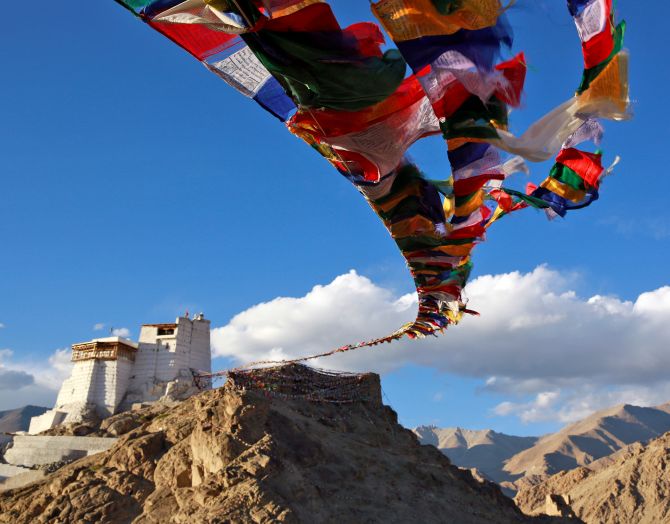 Photograph used for representational purposes only.

"People were dancing in the streets, and rejoicing in markets. Ladakhis had been struggling for over 70 years to see this day," Dolma said. "We were emotionally overwhelmed. I am very happy that now we will finally be a Union Territory."

Dolma, 68, a fourth-generation Ladakhi, earlier worked at the Sonam Nurboo Memorial Hospital and now runs Lyon Hotel at Changspa in downtown Leh, a hub of tourists.

Emotions expressed by people like Dolma is ostensibly a dominant feeling in Leh district of Ladakh, evidenced in streets and market places.

A prominent roundabout in streets carries a banner put up by activists that reads: "Ladakh freed from Kashmir".

A separate Union Territory has been a long-standing demand of locals, many of who have alleged that the Ladakh region had been neglected by leaders of Jammu and Kashmir.

Many local residents feel the region will see growth and prosperity now as Ladakh will take charge of its destiny in its own hands.

The Centre had on August 5 scrapped Jammu and Kashmir's special status by abrogating provisions of Article 370 of the Constitution and bifurcated it into Union territories -- Jammu and Kashmir, and Ladakh -- that will officially come into effect on October 31.

A resident of Chemday village, who did not wish to be identified, said she studied at a university in Jammu, but had had to go to Srinagar for various paperwork.

"And, being Ladakhis, we had to face a lot of problem as, not only the long distance for travel, but we were expected to grease palms of many government staff to get our work done," she said. "I am very happy, we are separate entity now."

However, not everyone is swept by the wave of the initial euphoria and many Ladakhi people -- young and old, living in Leh town or villages in the district -- are feeling apprehensive about the future that lies ahead.

Stanzin Jordan, 28, a Leh-based entrepreneur said he was not very excited by all the buzz about the UT status.

"Actually, I feel very confused, as to what will happen to Ladakh after the UT status," Jordan, who graduated in August from the year-long Naropa Fellowship, said.

"Ladakh's ecology is very fragile and infrastructure and other projects are now expected to be brought in her," he said. "I can't tell how much jobs will be created for locals, and a bit concerned about the impact of new set-up on the existing ecology and our own local culture."

Ladakh indeed has a very distinctive culture, and in Leh town, almost all buildings, hotels and houses, display the unique Ladakhi design in wood in their facade.

The demand for a UT status has been a long-drawn struggle, and one of the first Ladakhis to raise the issue was Buddhist scholar and politician Bakula Rinpoche, after whom the Leh airport is named.

Asked about the future of Ladakh post the UT status, Buddhist leader His Eminence Drukpa Thuksey Rinpoche said: "People are excited, but, we don't know what will happen after the UT status comes."

"Our worry is about our culture, and our culture should not be destroyed because of the ramifications of this UT status," said Rinpoche.

Prayer flags fly at Namgyal Tsemo Monastery above the town of Leh in Ladakh, India September 24, 2016. REUTERS/Cathal McNaughton SEARCH "CHILD MONK" FOR THIS STORY. SEARCH "WIDER IMAGE" FOR ALL STORIES.
Hinting at urban issues arising due to increase in population, he said: "Our Ladakh should not become more dirty or polluted after the UT status now. We must preserve our Himalayan region as we grow ahead."

In other areas of Buddhist-dominated Leh district, too, people are largely happy about the UT status, with some confused or muted in their response, but in Muslim-dominated Kargil district of Ladakh, a section of citizens have been protesting the decision.

Sonam Chuskit, 23, who is pursuing a master's degree in political science through a long-distance programme from Jammu, is sceptical about the decision to make Ladakh a Union territory.

A resident of Liktsay village, about 90-minute ride from Leh town and situated at an altitude of above 11,000 ft, Chuskit points to the pristine mountains and river streams near her house, which villagers use for household work.

"UT status would mean more infrastructure projects, more pressure on ecology, over-population in this fragile region. I am worried," she said.

The woman also pointed out that overtourism in pristine areas like the Pangong Lake has already begun to damage the ecology as many tourists leave plastic and other trash behind.

"I hope that after UT status, my region gets good educational institutions and hospitals so that we won't have to seek higher education and healthcare elsewhere, but care should be taken to not harm the environment," said Chuskit, who wants to become a teacher.

In the same village, Kalzang Chosdin, 29, said: "We are poor people just trying to live our lives without compromising the nature."

"UT or no UT, our lives will be the same," Chosdin said as she carried a sack of grass on her shoulders and walked towards the horizon.