After Devendra Fadnavis cleared that no bargaining on chief minister's post with Shiv Sena will be done and former state Chief Minister Prithviraj Chavan said about consideration of Shiv Sena proposal if any comes, there are two most probable options in Maharashtra for formation of government -- either the Bharatiya Janata Party goes ahead with forming a minority government as it did in 2014 and testing the waters when floor test happens or Shiv Sena aligning with the Nationalist Congress Party-Congress and give a new option for governance in the state.

In 2014, the BJP formed a minority government when all four major parties -- the BJP, the Shiv Sena, the Congress and the NCP -- contested separately and BJP emerged as the single largest party with 122 seats in 288-member assembly.

The NCP walked out during floor test in November 2014 which enabled Fadnavis government to pass the floor test easily and soon after that Shiv Sena also joined the government and supported the BJP for the whole five-year term.

In 2019 Maharashtra assembly elections also BJP has emerged as the single largest party with 105 MLAs, but this time they contested in a pre-poll alliance with Shiv Sena which got 55 seats and is demanding for an equal share in government with the rotation of the chief minister's post between them and BJP for 2.5 years each.

If the BJP goes ahead with the idea of forming a minority government without the Shiv Sena like in 2014, the NCP is less likely to support the BJP in any way.

The NCP top leaders Sharad Pawar and Praful Patel have made it clear that they are not interested in government formation and are happy with the role of Opposition.

The second option is Shiv Sena reaching out to the Congress and the NCP for outside support or joining Shiv Sena-led government.

Though the NCP has shown its complete reluctance in any efforts from its end to form a government either with the Sena or with the BJP, Congress leaders have clearly stated on at least three occasions that they will consider to support Shiv Sena chief minister if any formal proposal comes from their side.

For the Shiv Sena, taking the support of NCP or Congress has its own complications as the two parties will never approve Shiv Sena's core ideas like Hindutva and Ram temple among others.

Fadnavis on Tuesday said BJP national president Amit Shah has not given any confirmation about giving the chief minister's post to Shiv Sena.

However, he asserted that the BJP will be leading a stable government with Shiv Sena for the next five years.

"The BJP will be leading the stable and efficient government of Mahayuti (alliance) for five years. I assure that this will be a BJP-led government. Our party president has confirmed that nothing has been decided on giving CM post to Shiv Sena.

"No formula has been decided yet," Fadnavis said.

Later Shiv Sena leader Sanjay Raut expressed dismay over Fadnavis' statement that no '50:50' formula had been reached between the two allies.

"I do not know what the chief minister has said. If he is saying that the '50-50 formula' was never discussed, then I think we need to change the definition of the truth. What was discussed, regarding the issue the chief minister is talking about, is known by all. The media was there," Raut told ANI.

On the other hand, Prithviraj Chavan on Tuesday said here that voters are in 'confusion' and the 'distrust' between the partners (BJP and Shiv Sena) shows that they cannot form the government.

The former chief minister said that if the Shiv Sena comes with a proposal to the Congress for the formation of the government in the state, it will discuss it with its allies and also put it before the central leadership.

"If the Shiv Sena comes to us with a proposal, we will put that proposal before our high command and discuss it with the allies as well. No such proposal has been given by the Shiv Sena as yet," said Chavan. 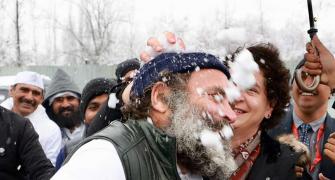