The horrific sexual assault and burning alive of a young veterinary doctor has shocked the nation.
A Woman in Today's India reacts to the unspeakable crime that should shame every Indian. 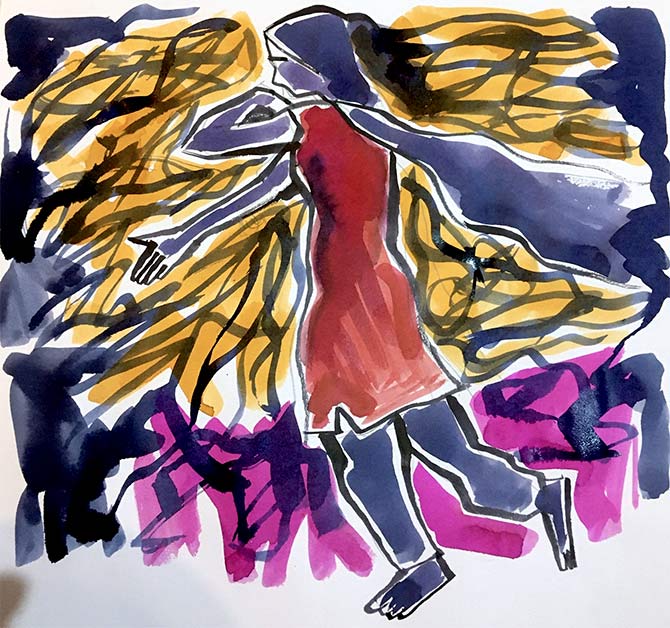 Dear Men (that's how you begin a letter, isn't it? Dear So-and-So? Ingrained habits die hard! So, yes, I guess... Dear Most Men)

You've met me every day, in some form or the other.

The stranger on the street. The bus. The train.

Today, put yourself in my shoes.

I was well educated; I used to be a veterinary doctor.

I was beautiful. Smart. I had a loving family. I lived in Hyderabad.

On the evening of Wednesday, November 27, I stepped out of my house. But I didn't return home.

Because some men decided otherwise. And they made my last few hours an unbearable agony.

The next day, my family had to identify my burnt, twisted, body.

Can you imagine doing that? Looking at a charred mess and trying to find some trace of your loved one, hoping against hope... that the person you love is alive? And safe?

But then, they saw my Ganpati pendant. And my scarf.

But they don't know yet if I was raped. The speculation is that I was. Every glance they meet, and even the ones they don't, tell them that I was.

Meanwhile, medical tests will be conducted on me to confirm that.

Can you imagine the torment my family is going through right now? That they have been going through since I called my sister on Wednesday night to tell her I was scared because of some men. That they will continue to go through until they get what remains of me, so that they can cremate me. Once again. That their torture that will not end, not until they get justice.

Dear men, you tell me. Tell all Women.

Tell me, A Woman In Today's India.

My eyes have dimmed with tears.

My head has pounded with anger.

I have felt shades of fear -- from something as mild as a frisson to Defcon 10, when my heart raced, adrenaline flooded my blood and all I wanted was to reach safety.

The cause was the same.

Eyes fixed on your chest as someone talks to you.

This is just a glimpse of the price every woman pays. Every day. For being a woman.

I have moved from being a scared girl to a woman who will do everything possible to defend herself.

Will I succeed? I don't know.

Because I am fighting -- and I can't let my guard down for even a second -- against your limited mindset.

Where you, because of your gender, see me, because of my gender, as something that belongs to you and can't accept the fact that I don't.

I could be a stranger, but you are a man, so I have to be submissive, bow to your will.

And if I don't, you will -- depending on how safe you feel carrying out that act -- humiliate me, abuse me, touch me, rape me.

Because, inside, you are cowards. You will only do these this if you feel you can get away with it.

I become a 'thing' that must satisfy the twisted thought in your head or surge in your loins.

So let me tell you something, something you know, but don't acknowledge or don't remember or conveniently forget.

And I will not let you treat me like a use-and-throw napkin.

Today, I feel dead inside.

Today, I am tired. I am grieving. I'm letting the tears flow.

Tomorrow, I will stand once again.

Ready to do what it takes to change your limited mindset.

To show you that a world exists beyond your fixation with your penis.

Do stop reading this for a minute.

Get up, and walk to a mirror.

Look into the eyes you see there.

What do you see?

I do hope you see determination as well.

Because, unless you see determination there, this world will never change.

As women, we are deep wells of patience and fortitude.

There are many, many, many things we let go because we are inured to it; we flick it off as we would a pesky fly. We subdue that irritation, that humiliation. We tell ourselves we don't have the time. Or that something else is more important.

Many times, our youth and inexperience come in the way.

Many times, there is a financial cost to reacting, a cost you can ill afford.

Many times, we are afraid.

Take a moment. And a deep breath.

Sit down if you want to.

Because I Am going to ask you to go to places you don't want to.

Recall every moment when you were harassed because you are a woman.

From something as small as the electrician insisting you call 'saab' to that annoying eve-teaser (oh, the disgusting world that this word encompasses!) to being groped.

To trusted men molesting you when you were too young to know what it meant; the only thing you knew was that it was not right. But your innocent mind did not even know how to frame such evil into words, so that you could tell someone what was happening to you.

You were never told such immorality existed in the world. You didn't know who to reach out to.

Some of us, like Nirbhaya, the veterinary doctor and so many thousands of others, pay with their lives.

And the blame for all of this lies with us.

With each and every one of us.

For the way we treat other women.

For the way we bring up our sons.

But, most importantly, because of our silence.

Yes, the #MeToo Movement is a brave step. Where courageous women are walking forward despite the backlash they are facing.

Not all of us have that courage within us; to expose ourselves to cruel public scrutiny, to fight to prove that what happened to us did happen, that is was wrong and the perpetrator has to face punishment commensurate with the crime.

(By the way, what's adequate punishment for rape? Incest? Sexual harassment? I can't think of any punishment that would be appropriate.)

But we can start with small things.

When you see someone being eve-teased, call it out. Let her know she is not alone.

When a woman raises her voice to protest, stand by her.

When you see someone, for example, a school girl in a bus being 'checked out' by a man, raise your voice. Alert the child. And the conductor. Ask him what he is doing.

Many times, this kind of public embarrassment is an efficient deterrent.

In fact, do it for any woman you see.

If you see a woman wearing a short dress or cleavage bearing top, a swimsuit or a bikini, don't judge her. She is not a'slut'.

Just as you have chosen what to wear, she too has the right to decide what she would like to wear.

Such thoughts don't cross your mind when you see a potbellied, shirtless man, or a man wearing a shirt unbuttoned to his navel, or -- disgusting! -- peeing on the road.

Then why should it cross your mind when you look at a woman?

Don't judge a woman because she chooses to wear make-up.

It is not a 'look at me' invitation. She is not 'asking for it'.

Don't judge a girl who you feel is 'extra friendly' with boys -- that does not make her 'bad'.

After all, you don't judge a boy for being extra-friendly with girls, do you?

Stand up for yourself when someone demeans you because of your gender.

Stand up for others when they are demeaned for their gender.

These are small, simple, beginnings.

It might seem difficult, even scary, the first time.

I promise you it will get easier.

Don't back off. Stand firm. Try it.

It will be the true beginning to making a world of a difference; in fact, to creating a new world.

A Woman In Today's India is the pseudonym for a young woman who is appalled by the growing number of terrible crimes perpetrated against women in India today. You can reach her at womanindia@rediffmail.com
Dominic Xavier, a graduate of the J J School of Art, is the Executive Managing Editor (Art and Design) at Rediff.com.

A WOMAN IN TODAY'S INDIA