Prime Minister Narendra Modi on Thursday addressed the nation on the occasion of 73rd Independence Day.

Modi led the nation in celebrating the event by hoisting the national flag at the ramparts of the historic Red Fort in Delhi.

Addressing the nation for the first time after coming back to power with a huge mandate, the prime minister touched upon many issues including scrapping of Article 370, triple talaq and many more.

Here are the top quotes from his speech. 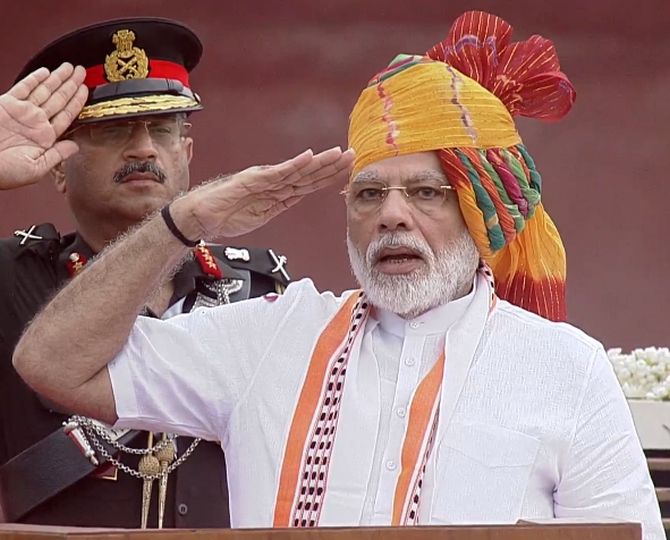 1.  We have taken some very significant decisions in the first 10 weeks itself to ensure that the nation sees unhindered growth. The removal of Article 370, Article 35-A and ban on Triple Talaq have been important steps. We have fulfilled the dream that Sardar Vallabhbhai Patel had for India

2. Our government does not delay decisions. We neither nurse problems nor keep them pending

3. One Nation, One Constitution spirit has become a reality after scrapping of provisions of Article 370 and India is proud of it

4.  Why did those who are supporting Article 370 make it a permanent provision for J and K and kept it a temporary measure

5. Scrapping of instant triple talaq will help Muslim women live a better life. The decision should not be seen through a political prism...if we can take steps against 'Sati' custom, female foeticide and dowry, then why not against instant triple talaq

6. Discussions should now be held on One Nation, One Election, it is imperative to make the country great

7. Every effort made to remove corruption and black money is welcome. These are menaces that have ruined India for 70 long years.

8. Our forces are India's pride. To further sharpen coordination between the forces, I want to announce a major decision from the Red Fort. India will have a Chief of Defence Staff- CDS. This is going to make the forces even more effective

9. 'Population explosion' causes new challenges for coming generations, central and state governments should launch measures to deal with it

10. Today, the entire world faces the threat of terrorism. We must deal with it collectively. India will certainly do its bit to fight terrorism

11. I always ask can we not remove the excess influence of governments on people’s lives. Let our people have the freedom of pursuing their own aspirations, let the right eco-system be made in this regard

12. Wealth creation is important for us as only then wealth distribution will happen; need to respect those who create wealth

13. Our focus now is to build on 21st century India--the way it moves forward, how it functions and how it thinks. It is time to fulfil the dreams and aspirations of people

14. There is a 'huge' scope for improvement in tourism sector, everyone should visit at least 15 tourist destinations within India by 2022

15. India can become a 5 trillion dollar economy in the next five years. We have decided to invest Rs 100 lakh crore in infrastructure building

17. People's trust in us have given us new strength, the 2019 mandate shows that hopelessness has given way to hope among masses

20. 'Jal Jivan' mission to make drinking water available to all households announced, govt will spend Rs 3.5 lakh crore for it