News
Business
Movies
Sports
Cricket
Get Ahead
Money Tips
Shopping
Sign in  |  Create a Rediffmail account
Rediff.com  » News » RATE: Thumbs up or down for BJP's manifesto?

Three days before the first phase of the Lok Sabha elections, the Bharatiya Janata Party on Monday, April 8, released its manifesto with a focus on development and national security.

Top party leaders, including Prime Minister Narendra Modi, party president Amit Shah and Home Minister Rajnath Singh, were present at the launch of the manifesto -- described by the BJP as its "sankalp patra" -- in New Delhi.

Here are the highlights from the manifesto. 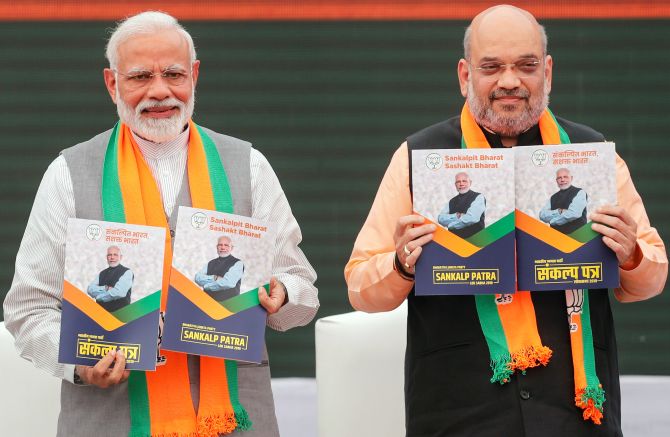 >> Zero tolerance against terrorism and extremism

>> Ever farmer will get benefit of Kisan Samaan Nidhi irrespective of land holding. Pension schemes for small and marginal farmers. Rashtriya Vyapari Ayog will be set up for trading community. Pension also for small shopkeepers

>> Rs 6,000 yearly income support to farmers and pension to small and marginal farmers above 60 years of age

>> BJP is committed on implementation of Uniform Civil Code

>> Committed to annulling Article 35A of the Constitution, as provision is discriminatory against non-permanent residents of J-K

>> 75 new medical colleges and post-graduate colleges to be established

>> Focusing on water resources, a separate Jal Shakti ministry will be formed

So, dear readers, what do you think of the document? Read the 48-page manifesto and rate the same.