'Facing foes with a common intent is not something Modi-Shah's BJP has done before,' points out Saisuresh Sivaswamy. 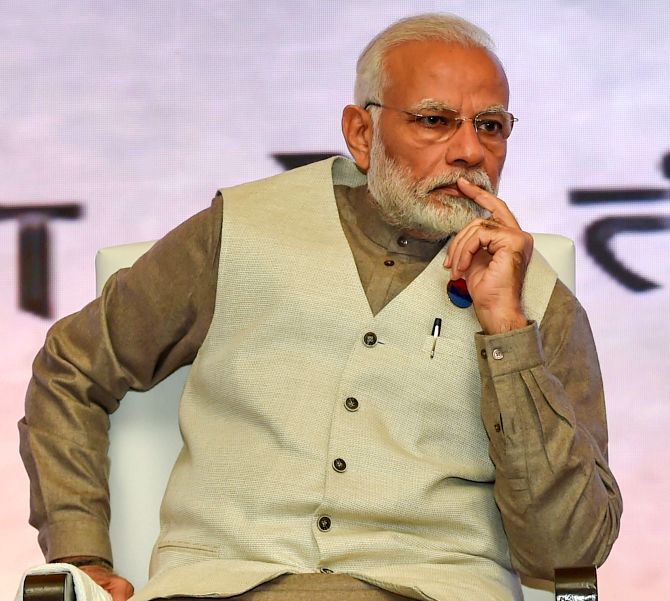 Win or lose, every election result is a time for introspection, to internalise the lessons learnt, to put in place preventives ahead of the next outing.

So what kind of inputs will Prime Minister Narendra Damodardas Modi and BJP President Amit Anilchandra Shah, the relentless election warriors, take away from the dismal five-state election results?

In the absence of a larger narrative, state assembly results are usually a referendum on the local government, and the latest round of elections too are nothing but. However, having pitted themselves as the BJP's sole election mascots who can swing the results their way with their carpetbombing tactics and precision targeting, it will be hard for the duo to live down the chorus that their voter appeal is finally on the decline.

Certainly not the best place to be in just months ahead of a do-or-die election to the Lok Sabha.

Personally, I don't think these election results will have a bearing on the outcome five months hence nor do I believe Modi is in any danger of losing his job, but still, a wise leader is one who anticipates trouble before it materialises, not someone who shores up defences after the enemy has landed at the gate.

The BJP's election reverses will certainly strengthen the Opposition's efforts to form a Mahagatbandhan against Modi, and if the voices from the confabulations engineered by Andhra Pradesh Chief Minister Nara Chandrababu Naidu, an old hand at knitting together a multi-hued quilt of parties of ideologies, seemed a little feeble till Monday, it will develop a natural timbre in the days to come.

The BJP's biggest strength is neither Modi nor Shah; it is the lack of unity in the Opposition ranks and the resultant multi-cornered contests.

If the stalwarts of the Opposition can bury their differences, swallow their egos and ambition and join hands to ensure one-on-one contests in BJP strongholds, Modi's second term in office is still born.

Barring Uttar Pradesh so far, none of the major states where the BJP harvested its 2014 tally is immune to the Opposition coming together and mounting a combined assault on it.

How Modi-Shah handle the biggest threat facing them will decide if the BJP will score an unprecedented second term in office or not. The assumption thus far has been that Opposition leaders will be unable to settle on a prime ministerial candidate from among them, which will put paid to all dreams of a common front against the BJP.

But the BJP's rout on Tuesday will infuse fresh impetus to the attempts at coming together to dislodge Modi from power.

The Congress has already shown in Karnataka that no price is big enough to shut the door on the BJP, even if it means allowing a junior partner to occupy the chair.

Regional parties may not share the Congress's fight to the finish resolve against the BJP, but they know that unlike the amorphous Congress, the laser-focused BJP represents a far greater danger to their very existence than anything they have encountered before -- witness Nitish Kumar's quicksilver moves to stay on the BJP's right side in his bid to stay relevant.

Facing foes with a common intent is not something Modi-Shah's BJP has done before.

To borrow a pop culture reference that has suddenly found resonance with the political class, desperate times need desperate measures. So even as they batten down the BJP's hatches, this is what its general and deputy need to do to remain relevant in 2019.

And unless this widespread anger is addressed, effectively, not through boilerplate statements or crude doctoring of data to paint a rosy picture but through effective action, there is no saying who will harvest this crop of anger to ride into office.

The BJP's ascendancy has been attributed, among other things, to its dominance of the digital world. At a time when political parties were still mastering the d of digitisation, the BJP showed off its nimble adoption of the brave new world.

Today, when other parties have shown that even laggards can catch up, the BJP seems adrift in its over-dependence on social media. Which, like any numbers game, can be, well, gamed.

So the Twitter storm its defenders brigade engineer regularly may well be a storm in a kitchen sink, and have no connect with the real world outside which is angry and upset. Something the BJP is failing to see or read.

Dasharath's son has been invoked to win elections for 30 years now, and even he must be fed up of the politics played out in his name.

It is amazing how, with the approach of every election, the BJP brings him out all brushed and burnished, and promptly puts him back in mothballs once the polls are won.

By now even the biggest cynic has seen through the game plan, and also realised that there are other, real, issues which are not being focused on despite grand promises. Like jobs.

Ram was but a vehicle for the BJP to carry out its real intention, Hindutva.

But just as the king of Ayodhya, this too may have become an issue facing the law of diminishing returns.

Polarisation, the other side of the same coin, was seen in full flow in these elections -- which coincided with the BJP's shrill campaign on Sabarimala, the saffron-clad UP chief minister emerging as the kingpin of the BJP's poll campaign, and statements like 'Ali and Bajrang Bali' in full flow -- but the electoral outcome must leave the saffron brains trust aghast.

What worked in 2014, when polarisation was the underbelly on which the Vikas train ran, may not do so next year.

It was good to see Modi walk along his predecessor Atal Bihari Vajpayee's cortege in August, maybe he should try walking in the latter's footsteps as well.

The avuncular first prime minister from the BJP knew how to rein in obstreperous allies and calm down frayed nerves of discordant allies, something that Modi and Shah have so dismally failed to do, as Upendra Kushwaha of the RLSP would testify.

For those dismissive of the need for allies in the face of all-conquering charisma, a sobering reminder: In 2004 Sonia Gandhi, who no one gave a chance in hell of defeating Vajapyee's NDA, managed to sew up a better, winning coalition and make history.

Ultimately, the option is Modi's. To make history, or to forget it. 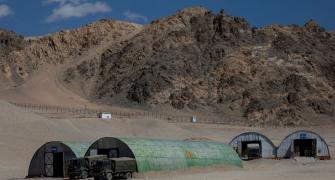 India, China hold 6th round of talks on standoff 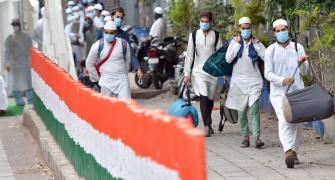