'They have realised that class war is not possible in India, so they are trying to bring about a caste war.' 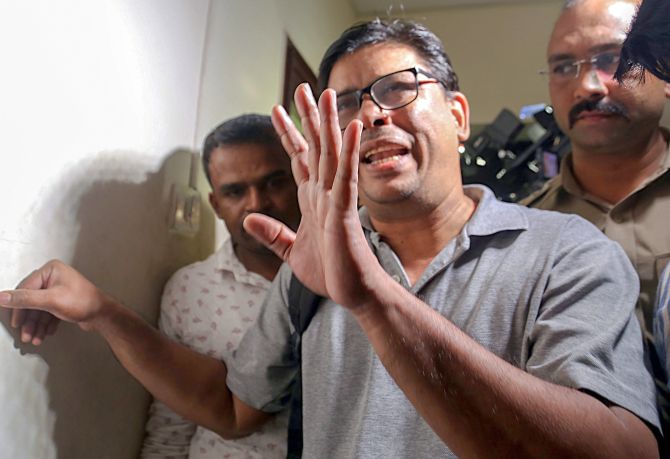 IMAGE: Arun Ferreira, human rights activist and lawyer, after he was arrested by the Pune police on August 28, 2018. Photograph: PTI Photo

Tushar Damgude filed the case after violence broke out at Bhima-Koregaon in Maharashtra on January 1.

A writer by profession, photographs of Damgude with Sambhaji Bhide were discovered on his Facebook page. Dalit activists blamed Bhide and Milind Ekbote for the violence at Bhima-Koregaon where they had assembled to celebrate the 200th anniversary of the victory over the Peshwas in the third Anglo-Maratha war.

"People are saying these activists who are arrested are eminent lawyers. Does it mean the police must arrest only labourers and plumbers for violence?" Damgude, below, asks Rediff.com's Syed Firdaus Ashraf.

Why did you file a case after the Bhima-Koregaon violence?

This event at Bhima-Koregaon is being celebrated for the last 90 years. It has a history of 90 years. Never in history did this event witness violence.

This time, the Elgar Parishad distributed provocative pamphlets and books at the event.

I witnessed all this on January 1, 2018. This literature which they distributed was highly objectionable.

What was written in those books and pamphlets?

The written material was to create tension in society by instigating people to revolt. They wrote that in future, there will be a revolution in India. 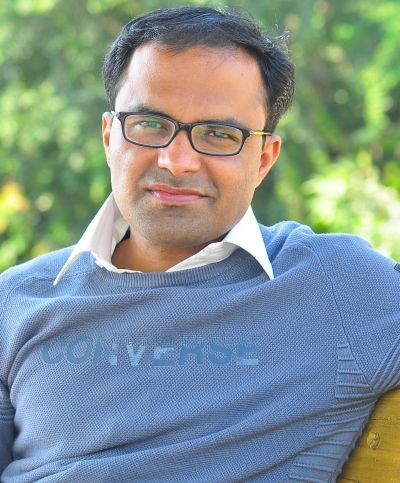 You spoke of violence at Bhima-Koregaon, but reports suggest that organisations led by Milind Ekbote and Sambhaji Bhide were responsible for the riots.

I am no one to say who was responsible for the violence on that day.

If Milind Ekbote and Sambhaji Bhide are responsible for the violence, then action must be taken against them too.

Already, they have been booked in that incident. Ekbote was arrested and got bail from the court.

Now when these activists are being arrested, why is everyone raising a hue and cry?

The trouble is that people like Sudha Bharadwaj and the others were not present at Bhima-Koregaon that day and yet they were arrested for their alleged role in the violence.

Osama bin Laden did not fly the planes into the Twin Towers (the World Trade Centre on September 11, 2001), but he was the conspirator.

In the same way, whose conspiracy led to the Bhima-Koregaon violence?

Yakub Memon didn't plant the bombs in Mumbai city, but he was a conspirator.

So this argument that these activists were not at that spot is fundamentally wrong.

People are saying these activists who are arrested are eminent lawyers. Does it mean the police must arrest only labourers and plumbers for violence?

Did you name these activists in your FIR?

I made a complaint and gave lots of names. I gave the names of Sudhir Dhawale, Sagar Gorkhe, Jyoti Jagtap and Deepak Dengale.

These people were in jail at times (for alleged Maoist activities) and some are out on bail. Some of them have spent months in jail.

But they were acquitted of all charges. So how can you...

(Interrupts) Let it be. If tomorrow there is some journalism event happening in Mumbai, will you call some eminent journalist to speak, or will you call Osama bin Laden and (current Al Qaeda leader Ayman al-Zawahiri?

If you do that, then obviously you will come under doubt.

How many people did you name in your FIR?

The names I took earlier and added the word 'others'.

You did not specifically name Sudha Bharadwaj in your FIR?

It is the job of the police to find who these 'others' are. When the police interrogated Sudhir Dhawale I don't know what lead did they get. It is their job to find out the details.

Sudhir Dhawale was acquitted by the high court in 2014 for not being a Maoist.

If a man is acquitted of a rape charge, does it mean that the next time he will not rape?

I don't have any personal enmity with them. P B Sawant is a judge, so I know his background. He is not some dacoit. So why will I file a case against him?

But these guys against whom I have filed the case, they are involved.

You think why the violence took place at Bhima-Koregaon for the first time in 90 years.

But reports say the violence was allegedly perpetrated by followers of Ekbote and Bhide.

Let them say that, they have to give some evidence.

I am giving evidence about how they were circulating books and pamphlets instigating violence.

Nobody questions them on such issues. They are given a clean chit.

When did Bhide ask to burn cities like they did? They come on roads and say 'maaro kaato'. When they can say it, tomorrow I can also say the same.

Who will stop me? There will be anarchy in society then.

The argument is that you filed the case against these people because they successfully united Dalits, which is a threat to Hindutva forces.

You know how these Maoists bring revolution all over the world.

In Russia, they exploited workers.

In China, they used peasants to bring in revolution.

In India, they tried to use workers first and failed, then farmers later on and again failed.

Now they have realised that class war is not possible in India, so they are trying to bring about a caste war.

In Maharashtra, if they go to the Maratha community and talk of revolution, these Maoists will be thrown out because they (the Marathas) are well to do as far as land and status in society is concerned.

Brahmins will not join them because they are educated.

So who will these Maoists target? The Dalits, as only they are left now.

I don't say so, Maoist literature does. You read that.

If you go to the slums and tell people to rise up against the people living in bungalows or flats, no one will come out, but the same people, if you instigate them on the basis of caste or religion, will come out to fight.

India is such a country.

(Interrupts) In the jungles of India there are at least 8,000 Maoists. And they write in pamphlets that ATS (the anti-terror squad), RAW (the Research and Analysis Wing, India's external intelligence agency) and CBI (the Central Bureau of Investigation) are their enemies.

If you see the state of Maharashtra, they have instigated this caste war. They have ingrained it in the minds of the people.

Earlier, there were personal enmities. Now it has become a societal problem.

These disgruntled people only need weapons to create disturbance in society.

Dalits have been left behind as a community. Don't you agree?

In the last 70 years, as a country, we have achieved a lot.

Today Dalits are IAS officers and sarpanches in many districts (and villages). How did they progress?

They progressed by walking in the footsteps of Dr Babasaheb. They never did Lal Salaam!

If they had done that, there would have been only violence (in the country).

Dr Babasaheb had himself written that if there is a threat to the Constitution, it is from the Communists.

Now when you say Dalits are being tortured, that does not mean they have to take weapons in their hands. We must sit together and try to resolve issues.

They have the SC/ST (Prevention of) Atrocities Act too (for their protection).

These activists said that Bhide Guruji was throwing stones at the Dalit rally.

When the truth came out, it was known that he had gone to attend a function 300 km away from Koregaon-Bhima.

Your Facebook page displays pictures with Bhide. It is said you have filed a case on his behalf. How far is this true?

People have only seen my photo with Bhide on Facebook, but they have not read the accompanying caption.

I have clearly written that India will be run by Indian Constitution. Nobody reads that.

I have also met Raj Thackeray and posted pictures with him too, so is that also a crime?

Why are you accused of doing all this on Bhide's behalf?

Ask those who are saying this. I don't care. I am a man of open views.

If you feel that there is something wrong, it does not mean you will come on the roads and destroy public property.

These arrests came eight months after the Bhima-Koregaon violence, that too at a time when there have been arrests of individuals connected to extremist Hindu organisations. The timing of these arrests is being questioned.

Everyone has the right to float conspiracy theories.

If some auto driver was arrested for allegedly being a Maoist, then nobody would have raised a finger, no questions would have been asked.

Just because they are the intelligentsia, professors and lawyers, all this hue and cry has been raised.

Have you ever seen these human right activists come out and speak against the Maoists?

Ask those who were injured during the Koregaon-Bhima violence who the real culprits are. They will give you the answer.

One disabled girl was harmed and showrooms were burnt. Are they taking the name of Ekbote?

I have done a lot of research on this violence. And you will laugh when you know the reality.

Ekbote remains under police protection for 24 hours and he is being accused of instigating violence?

If you have the police sitting next to you 24 hours, how can you plan violence at Bhima-Koregaon?

If you believe that, then was the Maharashtra police too involved in the violence?