'Hillary's been in the room': Obama vouches for 'President' Clinton

United States President Barack Obama made a forceful case for presidential nominee Hillary Clinton at the Democratic Convention in Philadelphia, offering a portrait of a tenacious public servant uniquely prepared to continue his work and while painting Donald Trump as a candidate of cynicism and fear unfit for the office. Extolling the virtues of his former secretary of state, Obama said: "A lot has happened over the years. And while this nation has been tested by war and it has been tested by recession and all manner of challenges, I stand before you again tonight, after almost two terms as your president, to tell you I am more optimistic about the future of America than ever before.

"Fair to say, this is not your typical election. It is not just a choice between parties or policies; the usual debates between left and right. This is a more fundamental choice about who we are as a people, and whether we stay true to this great American experiment in self-government.

"Most of all, I see Americans of every party, every background, every faith who believe that we are stronger together -- black, white, Latino, Asian, Native American; young and old; gay, straight, men, women, folks with disabilities, all pledging allegiance, under the same proud flag, to this big, bold country that we love. That is the America I know. "And there is only one candidate in this race who believes in that future, and has devoted her life to it; a mother and grandmother who would do anything to help our children thrive; a leader with real plans to break down barriers, blast through glass ceilings, and widen the circle of opportunity to every single American -- the next President of the United States, Hillary Clinton.

"That's the Hillary I know. That is the Hillary I have come to admire. And that is why I can say with confidence there has never been a man or a woman -- not me, not Bill, nobody -- more qualified than Hillary Clinton to serve as president of the United States of America.

"We battled for a year and a half. Let me tell you, it was tough, because Hillary's tough. She was doing everything I was doing, but just like Ginger Rogers, backwards and in heels. Every time I thought I might have that race won, Hillary just came back stronger.

"But after it was all over, I asked Hillary to join my team. She was a little surprised, but ultimately said yes -- because she knew that what was at stake was bigger than either of us. And for four years, I had a front-row seat to her intelligence, her judgment, and her discipline. I came to realize that her unbelievable work ethic was not for praise or attention -- that she was in this for everyone who needs a champion. I understood that after all these years, she has never forgotten just who she's fighting for," Obama said. 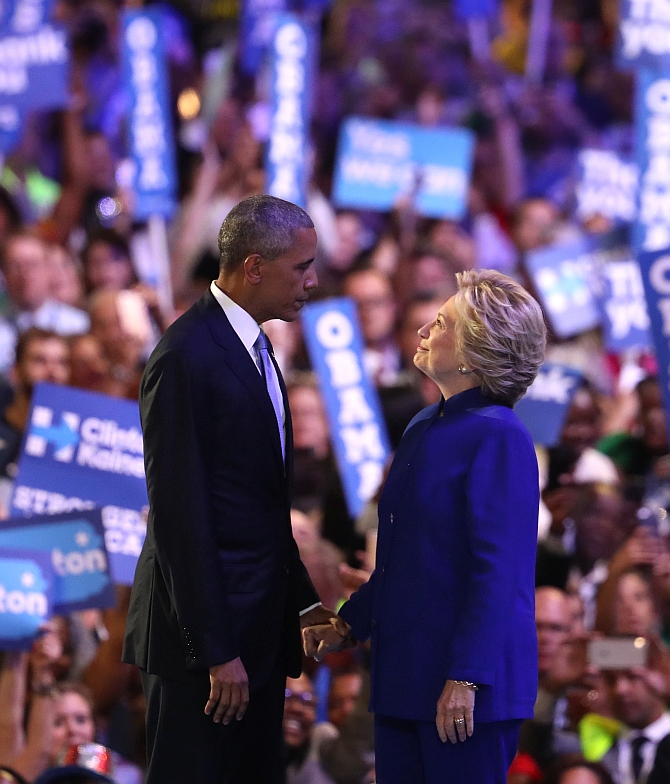 Obama said Clinton is respected around the world not just by leaders, but by the people they serve.

"She's worked closely with our intelligence teams, our diplomats, our military. And she has the judgment, the experience, and the temperament to meet the threat from terrorism. It's not new to her," he said.

"Our troops have pounded ISIL without mercy, taking out leaders, taking back territory. I know Hillary won't relent until ISIL is destroyed. She'll finish the job – and she'll do it without resorting to torture, or banning entire religions from entering our country. She is fit to be the next Commander-in-Chief," he asserted.

"America is already strong. And I promise you, our strength, our greatness, does not depend on Donald Trump. In fact, it doesn't depend on any one person. And that, in the end, may be the biggest difference in this election -- the meaning of our democracy," he said. "You know, nothing truly prepares you for the demands of the Oval Office. Until you've sat at that desk, you don’t know what it's like to manage a global crisis, or send young people to war. But Hillary's been in the room; she has been part of those decisions," he said.

"She knows what’s at stake in the decisions our government makes for the working family, the senior citizen, the small business owner, the soldier, and the veteran. Even in the middle of crisis, she listens to people, and keeps her cool, and treats everybody with respect. And no matter how daunting the odds; no matter how much people try to knock her down, she never, ever quits," he said. 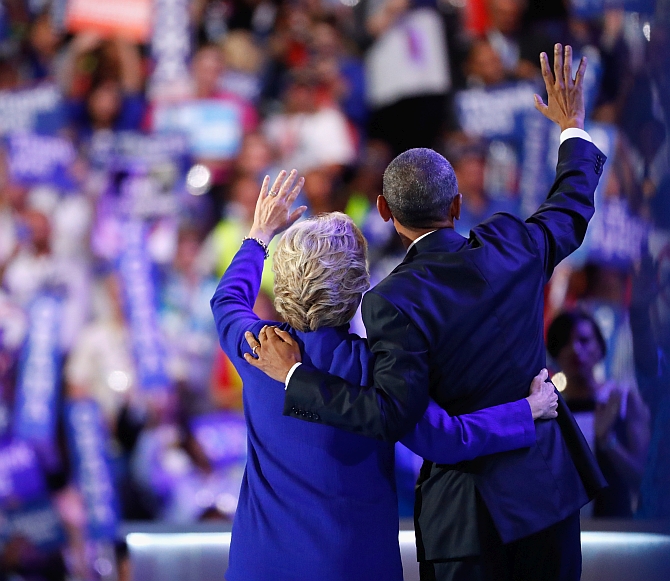 "Does anyone really believe that a guy who's spent his 70 years on this Earth showing no regard for working people is suddenly going to be your champion? Your voice?" Obama asked, referring to Trump. "If so, you should vote for him."

"But if you're someone who is truly concerned about paying your bills, and seeing the economy grow, and creating more opportunity for everybody, then the choice isn't even close," he continued.

"If you want someone with a lifelong track record of fighting for higher wages, better benefits, a fairer tax code, a bigger voice for workers, and stronger regulations on Wall Street, then you should vote for Hillary Clinton.

"In fact, it doesn't depend on any one person. And that, in the end, may be the biggest difference in this election the meaning of our democracy." 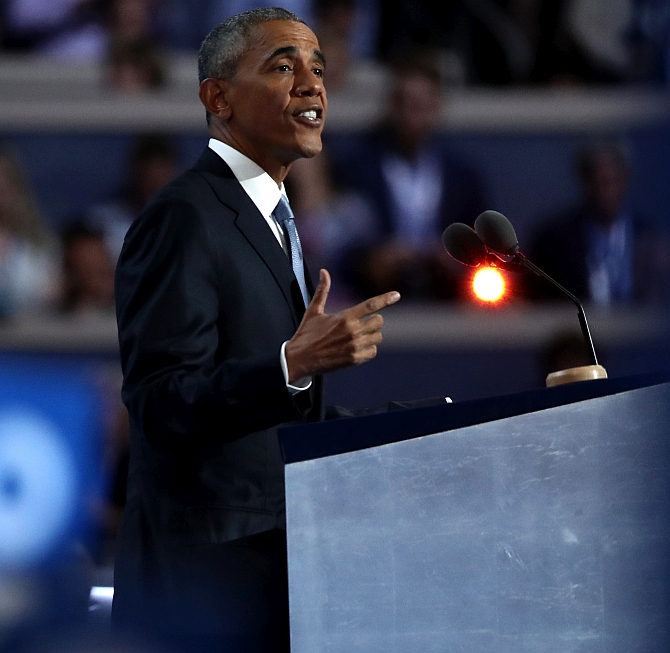 "Ronald Reagan called America "a shining city on a hill". Donald Trump calls it "a divided crime scene" that only he can fix. It doesn't matter to him that illegal immigration and the crime rate are as low as they have been in decades, because he is not offering any real solutions to those issues. He is just offering slogans, and hes offering fear.

"He is betting that if he scares enough people; he might score just enough votes to win this election. That is another bet that Donald Trump will lose. And the reason he will lose it is because he is selling the American people short.

"We are not a fragile or frightful people. Our power does not come from some self-declared savior promising that he alone can restore order. We do not look to be ruled. Our power comes from those immortal declarations first put to paper right here in Philadelphia all those years ago; we hold these truths to be self-evident, that all men are created equal; that together, We, the People, can form a more perfect union."

"He (Trump) is not really a plans guy. Not really a facts guy, either. He calls himself a business guy, which is true, but I have to say, I know plenty of businessmen and women who've achieved success without leaving a trail of lawsuits, and unpaid workers, and people feeling like they got cheated," he said. "Apparently, he doesn't know the men and women who make up the strongest fighting force the world has ever known. He suggests America is weak. He must not hear the billions of men, women, and children, from the Baltics to Burma, who still look to America to be the light of freedom, dignity, and human rights," he said.

"He cozies up to Putin, praises Saddam Hussein, and tells NATO allies that stood by our side after 9/11 that they have to pay up if they want our protection. Well, America's promises do not come with a price tag. We meet our commitments. And that's one reason why almost every country on earth sees America as stronger and more respected today than they did eight years ago," he said.

"Our power doesn't come from some self-declared savior promising that he alone can restore order. We don't look to be ruled. Our power comes from those immortal declarations first put to paper right here in Philadelphia all those years ago; We hold these truths to be self-evident, that all men are created equal; that together, we, the people, can form a more perfect union," he said.

"She (Hillary) knows that for progress to happen, we have to listen to each other, see ourselves in each other, fight for our principles but also fight to find common ground, no matter how elusive that may seem," he said. 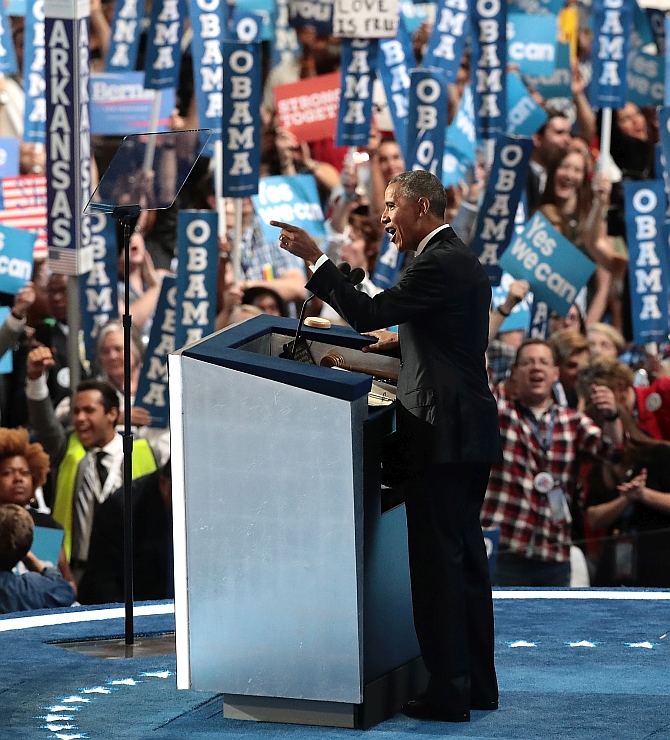 Making a passionate plea to elect Hillary as his successor, Obama said: "Time and again, you have picked me up. I hope, sometimes, I picked you up, too. Tonight, I ask you to do for Hillary Clinton what you did for me. I ask you to carry her the same way you carried me.

"America, you have vindicated that hope these past eight years. And now I am ready to pass the baton and do my part as a private citizen. This year, in this election, I am asking you to join me -- to reject cynicism, reject fear, to summon whats best in us; to elect Hillary Clinton as the next President of the United States, and show the world we still believe in the promise of this great nation."