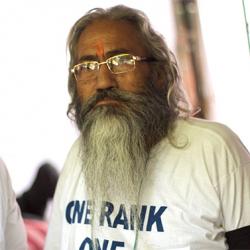 A resident of Badrinath

Naik Uday Singh Rawat served the nation as a soldier for 15 years till 1986.

“We spent our nights on foot, trying to advance and attack, and days hiding in the bunker,” Naik Rawat recalls his experiences during the 1971 War, “The air raids took place in the daytime, but attacks on foot took place at night. Before the ceasefire was called, our platoon launched an attack on December 11, which was termed successful, but I lost 8, 10 friends in a single day. I was only 20.”

After 15 years of service, he was asked to retire, but has no ill-feelings about it. “The army needs to keep itself young, and has no use for older soldiers," he says. "We have no complaints about that, but the pension they give us is not sufficient. I get Rs 5,500 per month. Luckily, I have no family since I didn’t marry, but even then I’m struggling to make ends meet.”

Naik Rawat is one of the many ex-servicemen who participated in the relay hunger fast at Jantar Mantar. He used to fast for 24 hours, was relieved by a fellow veteran and then returned to the podium to fast for another 24 hours.

“This is a democracy, the government cannot ignore us. We are soldiers who have put our lives on the line for the country and are feeling cheated now,” says Naik Rawat who went on an indefinite fast on August 25. “Nobody likes to resort to these kinds of things; this only happens when you’ve tried every possible way to reason with the government and they’ve shut all doors on you.”

“We are soldiers; we cannot behave like goondas, destroying property, blocking roads and setting fire to buses. This is the only way we can protest. We consider the country an inheritance for our children; we will not damage it in any way.”

Naik Rawat lives the life of a nomad these days. Since he has no family to tie him to his village in Uttrakhand, he only spends part of the year there. In the winter, when the cold is too much for his bones to endure, he travels down to Haridwar, seeking shelter in dharamshalas.

Though his finances don’t permit him to travel much, Naik Rawat says he “can’t stay in one place for too long; it makes me restless. I wish I could see the world, but, of course, I don’t have the resources for it. I have seen most of North India and East India. Once, I even made it toNepal. I was so excited to see the Pashupatinath Temple.”