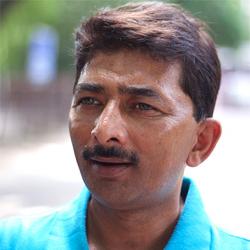 A resident of Delhi

Colonel Sanjay Arya (retired) of the Indian Army says even as a child he was drawn to the life of a soldier. The way army officers conducted themselves drew him in, he says, and in 1989, he enrolled into the fighting forces.

"I was sent to militant-infested Ferozpur where I found myself in the thick of things. Right after my stint in Ferozpur, I was sent to the LoC (>Line of Control) where the Pakistani troops were literally 50, 55 feet away from us,” he recalls. “Of course, one expects to exchange pleasantries with the other side, which we all did," he grins.

The colonel also spent time in Siachen, Kargil and Amritsar. Recounting his days in Kargil, he says, “It was so sensitive that locations, operation details weren't revealed till the very last minute. Amritsar was better; I was part of Operation Parakram, where my team and I were laying minefields. I saw one of my boys getting blown up in front of me. But what can you do? It's a part of army life."

Despite the hard times, Colonel Arya enjoyed his time in the army thoroughly. "The amount of respect we get, I don't think any other profession receives. And everyone lives together like a big family. This is something that's difficult to adjust to after retirement when you live amongst the public." "Of course, there is a dark side to army life as well -- the heavy feeling of knowing that each time you lead an operation, the chances are that you won't be able to get all your men back."

"And if, during an operation, you get injured," he adds, "you will be made to leave (the army) since you will no longer be fit to serve. Not only will your career be terminated, but you will also not get a chance to complete your 33 years of service, which means a low pension for the rest of your life."

Colonel Arya is looking for a job to supplement his family income, but things don't look bright. "Today, I get a pension of Rs 54,000. Fortunately, I have my own flat, so I can afford to send my kids to good schools. But even then, my monthly expenses are nothing short of Rs 60,000, Rs 70,000. I have been dipping into my savings, but now I have to find a job. It's been really hard, because I'm an infantry guy, not a technical expert."

"Then there's my age. I'm 47, so most employers take issue with that. Everyone wants young employees with long career spans ahead of them. So when I went into the market, the kind of offers I got were very demoralising."

The colonel was offered a job as a restaurant manager for a monthly salary of Rs 45,000. "But the job required me to stand on the restaurant floor till closing time, which is not befitting my status as a colonel. As officers, we have to maintain a certain decorum and way of doing things."He is also saddened by some reports that referred to the OROP protest at Jantar Mantar as a strike of sorts. "People said we were behaving like rickshaw-wallah who sit in protest each time the government increases petrol costs. But that's not what we're doing, we're not asking for anything new; we're only demanding what has already been promised to us."