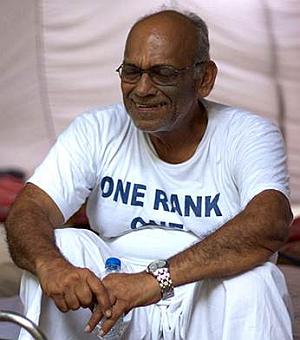 A resident of Muzaffarnagar

Indian Navy Commander A K Sharma (retired) participated in a number of operations to defend Indian maritime assets. Of his operations, he says the India-Pakistan war of 1971 and the action in Sri Lanka of 1988-1989 were the most action-packed.

“Sri Lanka was a risky operation, but then the thrill is in the risk. The LTTE (Liberation Tigers of Tamil Eelam) was an unorganised guerrilla force, not a regular army. They had no uniforms and were generally indistinguishable from the general public, which made it that much more difficult.”

“We survived there with a lot of luck and a little help from God,” he remembers. “The operation required us to serve more on land more than at sea. Our team was posted at the Kankesanthurai port, providing support to visiting Indian naval ships.”

Commander Sharma is one of the many veterans who has been on a fast unto death for OROP at Jantar Mantar. “Don’t call this an agitation, it’s our satyagraha,” he says.

“This is our truth. There is not a single political party who has not promised us OROP, but nobody has implemented it. One of the BJP’s (Bharatiya Janata Party) major election points was OROP. Narendra Modi himself said he would implement it as soon as he came to power. He had gone as far as saying that ‘It is in my fate to sanction you OROP’.”

“We waited patiently for 17 months, which is enough time for any government to implement a policy. If they can’t do it in 17 months, they are either incompetent or they simply don’t want to do it. This can no longer exist in thin air. In simple language, it is called lying.”

A father of two daughters, he says his family supports him in his fight. “It is very difficult for any of us to survive on our pension,” he says. “I did try to take up a job sailing with an offshore support vessel for some time. That was a merchant navy job, but I didn’t want to do that for too long. I just didn’t like it."

The commander doesn’t think about his days in the navy that much anymore. He has financial concerns on his mind and feels he needs to concentrate on those issues.

Asked about his hunger strike, he says that after 20 years of service, his body is tenacious. “I have only been drinking water since August 26. Don’t look so worried,” he smiles, “The human body is a fantastic machine. It can survive on water for many days.”