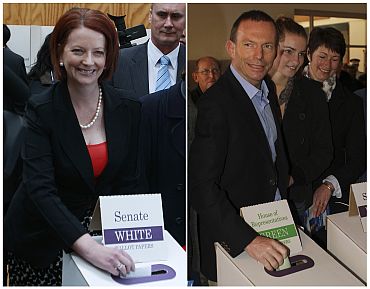 Australia [Images] appeared headed for a hung parliament for the first time in 70 years, as the ruling Labour party led by the country's first woman Prime Minister Julia Gillard [Images] overturned the opposition's early lead to forge slightly ahead.

With 76 seats needed for an outright win, Gillard's Labour party was up 68 seats against 62 for Tony Abott's Conservative Liberal-National coalition, after 58 per cent of the votes had been counted, according to ABC.

"We think a hung parliament may be the final outcome. It is a very, very close call," ABC quoted party leaders from either side as commenting on the knife-edge elections.

Senator Nick Minchin, a top strategist for the Liberals, said, "I think a hung parliament is looking more and more likely".

Foreign Minister Stephen Smith echoed the same thoughts, saying that his ruling Labour party was unlikely to reach the magic figure of 76. Australia hasn't had a hung parliament since 1940 when it was in the middle of the Second World War. The ABC tally put the Labour party ahead in the race for the 150-seat parliament, but showed an overall 5.4 per cent swing against it.

The Australian Election Commission put the tally at 60 seats for Labour and 49 for the Liberal coalition after 45 per cent of the votes had been counted. Experts say that if the Labour Party loses 13 seats, the country could be headed for a hung parliament. ABC said that the vote count was so close that early figures remained volatile, and the counting would go on till late in the night.

The Greens, the environment-friendly party, snatched more than 11 per cent of the vote and could make its appearance in the Australian parliament by winning a rare seat. But the new entrants potentially helped the embattled government to arrest its vote loss.

Minutes after the voting ended, ABC had reported that Abott's Liberal and National Party coalition was enjoying an over two per cent vote swing but the race has been neck-to-neck since the beginning. Gillard, 48, whose ruling Labour party was marginally ahead in opinion polls in the run up to the elections, was also shown leading closely in the exit polls.

Two separate television exit polls, which were conducted as the polling closed, predicted Gillard's win by 51 or 52 per cent of the vote to Liberal coalition's 48 or 49 per cent, but also indicated dangerous swings against the ruling party in key marginal seats.

Dubbed the 'mad monk', the London-born Rhode scholar was considered a rank outsider when he surprisingly became the Liberal Party leader in December and was trailing when the campaign started five weeks ago, after Gillard called a snap poll.

A fitness fanatic, 52-year old Abott almost did 14 to 18 hours of campaigning. The general election has been billed as one of the tightest in decades.

Image: Australian PM Gillard and federal opposition leader Abbott as they cast their votes in Australia