Get latest news on your desktop
Can you be greedy and good?
B S Prakash July 29, 2009 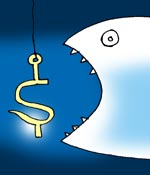 Glancing through Business Week, the international business magazine, which I read out of professional necessity but generally without much interest, I was startled to see an item 'MBAs to take an oath of ethics.'

The news item began with a reference to the Harvard MBAs, the cr�me de la cr�me of the tribe, the future captains of capitalism. It said that many of them were taking a voluntary oath to uphold some ethical principles as they embarked on their illustrious careers. The underlying sub-text and the motivation? The lessons learnt from the current economic meltdown.

What does the oath convey? It says for instance that the goal of a business manager 'is to serve the greater good,' that they 'will refrain from advancing their own narrow ambitions at the expense of others,' that they will be responsible not only for the shareholders but for the larger stakeholders. Nothing revolutionary, you think? It is no less than a declaration that 'Greed is no longer God.'

I must confess that of late I have been an avid reader of the growing case studies about the collapse of big business, the meltdown of the global finance and such like. Living and working in the US till a year ago, in my job, I had come to know big bankers, venture capitalists, hedge fund managers and generally, the movers of millions in minutes.

In an earlier column here, I had narrated the story of one such hedge fund manager who was bemoaning how all his hard work had been futile. Their talk of acquisitions and mergers based on algorithms and simulated models seemed to resemble discussions between nuclear physicists about enrichment and reprocessing and was equally esoteric.

We ordinary folks understand money as in dollars and rupees, something to hold or buy in manageable or imaginable quantities. I knew that my inability to grasp anything in millions let alone trillions was due to my own limitations, but their world still seemed hugely substantial and somewhat magical. And then like magic a large part of it disappeared.

In India fortunately we have been somewhat insulated though not strictly 'decoupled' -- a phrase being used to indicate economies relatively independent from the global turbulence. We are even now talking of 6 per cent growth, while reconciling ourselves to some setbacks.

Follow the stories in the US, Europe, Japan [Images], however, the mind-blowing numbers of trillions of losses, and the head begins to reel. Was there all this wealth really, who owned it, what did they do with it, how did they lose it? You need not be interested personally in money to be curious about its impact and its intersection with human behavior. Such is my condition.

Literature on this subject itself has become a cottage industry and there are hundreds of books out there explaining to simple folks like me, what happened.

What have I learnt reading these stories?

First, it appears that there was no one underlying cause for the collapse, but several which were occurring at the same time. Rather like the theories about why the Air France [Images] plane from Brazil [Images] to Paris went down so mysteriously into the Atlantic: not one failure but several at the same time, what is termed concurrent serial failure.

Second, despite all the sophistication in theories and the complexity of arguments, there were some basic principles at work, which caused the crash. My summary may sound like the kindergarten level of economic analysis, but all my reading tells me that there are some simple truths and elements of commonsense in this uncommon collapse.

The original sin was reckless lending by the bankers. One sees it in the normal every day-to-day life in the US. You only need to have a bank account and a credit card and thereafter you spend first and think later. The average American is in debt to the extent of $ 8000 and the nation as a whole is swimming in it with the total debt estimated at $ 57 trillion. (Don't even bother trying to understand this figure: think of it as the total debt being larger than 57 times the size of India's total GDP!).

To give another illustration, the savings rate in the US is actually minus, ie, less than zero, as compared to over 35 per cent in China. I am mentioning China and not India, as we all know our proclivity to save. The memoirs being written by bankers now have unbelievable tales of how they were pushed and pressurised into giving loans and did everything possible to make their clients accept money!

Eventually, in the US this took a particularly vicious form in loans for housing to those who had very little chance of repaying it, the so-called sub-prime mortgages.

The next step was a process where individual banks could 'bundle' such loans together and pass them on to other more distant entities, which became the repositories of huge sums of unrecoverable moneys. This process carried out in a big way a few times makes the whole system 'toxic,' a term borrowed into banking.

Apart from lack of regulation and risk assessment, there seems to be another factor at work as to why prudence and sense failed in such matters. New tools and concepts such as leverage, arbitrage and debt swaps which created virtual growth, ie, growth seen on the computer screens in banks without a corresponding reality in terms of brick and mortar or goods and services, contributed to the bubble and the illusion.

Virtual reality is different from objective reality. This seems to have led to the de-linking between the financial sector and the real economy.

How was all this sustained for so long? Here we pass from the national to the international. At the international level, the reality was that of money flowing in one direction mainly to China as the US bought and spent, and China supplied and saved.

A bubble, a house of cards, a castle in sand, or any other similar phrase for something ephemeral which would collapse if one part came down, describes the financial sector in large parts of the world in 2008.

And the lessons are still being learnt.

One of the lessons is the management school oath that I talked about. To the effect that greed alone is not good, even if greed is an essential ingredient for business. For instance, for bankers to understand that 'don't push that loan, if you know that there is no hope in hell that the debtor can repay. It may be attractive to you as the lender in the short term, but look beyond.'

Or to know that beyond the shareholders, there is a larger society. Etc. Etc.

Let us see if such an approach gains acceptance.

At the same time, let us not forget that the best and the brightest in the American system, and certainly in our system, have had a larger vision. Bill and Melinda Gates seem to be more interested these days in doing public good than worrying about the valuation of their wealth.

Even the high priest of American capitalism, Warren Buffet, has enjoyed giving away large chunks of his wealth for philanthropy. We have had examples of what is now called CSR or Corporate Social Responsibility going back to the Tatas before it became a global brand and ethical values that the founders of Infosys [Get Quote] have become known for.

So forgive me if I rejoice reading the MBA oath in which I find shades of the Bhagwad Gita. Ultimately life is finite and though money is important, it is not everything. Didn't our grandmothers always tell us that?

B S Prakash is India's ambassador in Brazil and can be reached at ambassador@indianembassy.org.br

Click here for more columns by B S Prakash