The team, led by Kumarasamy Thangaraj of the Centre for Cellular and Molecular Biology in Hyderabad, found that in affected people there a 25-unit section missing from the DNA in the chromosome 11 found in their cells. The study is important given that heart disease is a major cause of death in India and was, till this study, often attributed only to an unhealthy lifestyle.

Because DNA is a form of coded information, the missing unit meant that the protein formed from that section of the DNA strand would be abnormal. The unaffected protein formed is important to bolster the structural organisation and contraction of cardiac muscles.

"If anything goes wrong, it causes abnormal contractions," says Thangaraj.

According to , who did most of the initial work on the project, because DNA consists of two strands, if at least one strand is normal, the onset of heart trouble could be delayed. A protective mechanism breaks down the abnormal protein but this system begins to fail as the person becomes older, he says.

According to the paper, 'Although many young and middle-aged individuals carrying the deletion were asymptomatic or had only mild hypertrophy, the majority (90 percent) of the oldest members of each family were symptomatic. In most carriers the effects remained dormant until the third decade and then manifested themselves�'

Dhandapany based his research on work done by , his senior at Madurai [Images] Kamaraj University in Tamil Nadu, who discovered the mutation and worked out the details at the Max Planck Institute in Germany [Images].

"Dhandapany took it to the next level. I used only data from Tamil Nadu and Kerala [Images]," says Sadayappan, currently a researcher at the Cincinnati Children's Hospital Center. The research finally included samples from all over the world. 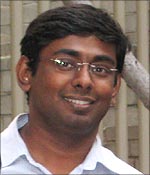 "In India, you have to convince a lost of people of the importance of the study," says Sadayappan, adding that Dhandapany was lucky to have worked at CCMB.

Dhandapany was then still at Madurai Kamraj University, and had visited CCMB in 2004 to attend a conference. There, he gave a talk on the data he had from two families with a history of heart disease that appeared to have the defective gene. That was when he met Thangaraj.

Among other things, Thangaraj was already famous for providing evidence that the Great Andamanese and Onge tribes in the Andaman and Nicobar Islands were one of world's oldest surviving indigenous groups, having followed the coast all the way from Africa to reach their current location about 65,000 years ago. This is about 5,000 before modern humans were believed to have left Africa.

Thangaraj found the research interesting enough to help provide Dhandapany with the facilities. With help from Thangaraj and the center's director, Lalji Singh, Dhandapany began work.

"I know how to dance but I want the stage," he says. And Thangaraj and Lalji Singh provided that.

He spent long hours -- often, he says, from 3 pm each day to 11 am the next -- making millions of copies of DNA from the samples he had collected. Thangaraj, too, kept long hours, often staying on till 1 am every night.

Although they had thought the project would last three months, they soon realised it was possibly something not limited to two families in Madurai. It took four years, and help from a variety of scientists -- in India, Pakistan, the UK and the US -- to complete the project. Meanwhile, Dhandapany went to different parts of the country, often paying from his own pocket to collect samples.

But the data was worth the effort.

The highest incidence of the defective gene was in Kerala (6-7 percent) and lowest in Chattisgarh (2.7 percent).

They found it was distributed all over India, except in the Andaman islands and the northeast of the country. If the gene was found in the Bisht population in the Himalayas, it was also prevalent in the Kattunaickans who live in deep in the forests of Kerala. 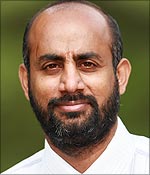 dia, two of the researchers, Stephen Oppenheimer and Martin Richards, had found the same gene in aboriginal Malays and Tenggerese (descendants of the Hindu kings with origins in India that ruled Indonesia from the late 13th to the 15th centuries).

A similar mutation -- though not the same one -- found in a Japanese group, too, had the same effect on cardiac health.

Perhaps most importantly the group concluded that because the gene was not found in other populations that appeared to have split off from the group that first populated the Indian subcontinent about 33,000 years ago. And because it was found in all groups -- from Brahmins to the tribals -- they believe the mutation that produced the gene predates the solidification of the caste system in India.

Although Chris Tyler-Smith from The Wellcome Trust Sanger Institute in the UK, which funded the project, had believed they would have expected "such a deleterious change to have 'died out'," Thangaraj says that in the group with at least one effective gene the effects are usually seen only after the age of 40 -45, which was past the age of reproduction in many humans.

"By the time they get their symptoms, they have passed on the gene," Thangaraj says.

It was pointed out that usually deleterious genes could give people an advantage -- as seen in the protection that sickle cell anemia, a genetic disorder seen in Africa, provides against malaria. But Thangaraj says that although the team had tried to find any benefits to the defective gene, but failed. He felt the mutation may have lingered on in the population only because its effects are seen after the age of 40, an age by which most of our ancestors were past their reproductive age, or even dead.

But the researchers are clear that the presence of the gene alone does not determine survival.

"If you knock out protein in the mouse model, the mouse lives but they get heart disease. This protein is not necessary for life but for basal cardiac function," says Sadayappan, who plans to study mice with exactly the same 25 units deleted.

According to Dhandapany, now working on children's heart disorders at the Mt Sinai Center for Molecular Caridology, shows how genetic ancestry can be employed in public health. And Thangaraj says this research could result in screening for the defective gene, perhaps finally leading to new drugs that degrade the abnormal protein found in people past the critical age.

Sadayappan believes that, given the state of research, there soon could be repair enzymes, carried by benign viruses, that could fix the error in the heart -- or there could be corrective chemicals that would become active only in heart tissue.

But, as Thangaraj clarifies, the presence of the gene does not mean that healthy living does not stave off heart disease.

"Lifestyle and eating habits are not excused," he says.

Among the groups funding the research and the authors were the Council of Scientific and Industrial Research, the Indian Council of Medical Research, the Post Graduate Institute of Medical Education and Research, Chandigarh, the American Heart Association, Ohio Valley Affiliate, and the Burroughs Wellcome Fund. The study received no funding from pharmaceutical companies or other business interests.