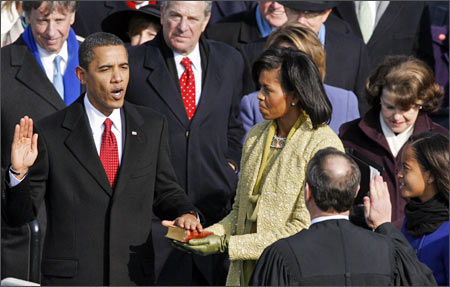 Forty-six years after the late iconic civil rights leader Rev. Martin Luther King--who was inspired by Mohandas Gandhi-- delivered his 'I have a dream' speech on the steps of the Lincoln Memorial, Barack Hussain Obama, whose campaign theme was 'Yes, we can," was sworn in at 11.56 am on January 20 as the nation's 44th president.

Obama thus became the first-ever African-American chief executive on the steps of the west front of the Capitol in the presence of over an unprecedented crowd of over two million.

Interestingly, both Obama and Vice-President Joseph Biden, who was administered the oath of office at 11.46 arm by Justice John Paul Stevens, 88, had both voted against the confirmnation of Roberts while they were both US Senators.

Immediately, preceding the presidential swearing-in were performances by Yo Yo Ma, Anthony McGill, and Itzhak Perlman, and just before Obama began his inuaugural address, the US Marine Corps Ban played 'Hail to the Chief,' amidst a 21-gun salute.

By some stroke of luck this correspondent was assigned a great seat with the periodical press in the green section on the West Front on the Capitol, just at the base of the Capitol Hill steps where the oath was administered.

Looking down at the almost mile and a half down the National Mall were a sea of people the likes of which I had never since ever in my life in Washington,DC in my more than two decades of covering Washington and only three years ago during a pilgrimage of Hajj at Mount Arafat in Saudi Arabia where the crowd was in excess of three million people.

Security was unprecedented and each person was methodically checked by going through the magnetometers but we journalists were permitted to carry our laptops, two bottles of water, a couple of energy bars, a note-book and a small camera if we needed to bring one. Also, our cell phones, but with the traffic being so happy with the throngs of people, talking to each other, taking pictures,etc. most often the signal would fade away or die altogether.

But save for the photographers of the major mainstream newspapers and agencies and the leading networks, who were assigned vantage spots, most photographers were assigned National Mall credentials and were amidst the sea of people and obviously constrained to shoot the West Front of the Capitol. And, among them were my two colleagues Paresh Gandhi and Jay Mandal and Paresh had called me to say that my request to him to also snap as many pictures of Indian Americans and South Asian who may be among the throngs were difficult, because everyone was covered from head to toe in layers of clothing to brave the freezing temperatures brought on by the wind chills.

All of us had to leave at about 4 am by the metro trains to make it to the National Mall and the Capitol by 8 a.m when the gates opened. And getting down to DC took more than three hours as the metro as well as the stations were packed and the lines several miles long and then the same story was repeated at the gates were security was stringent though surprisingly brisk.

But the euphoria was palpable and permeating and many of the people I spoke to while waiting in line both at the metro station and downtown clearly acknowledged that they may not even get a glimpse of Obama being sworn in but didn't care because they wanted to just place their feet on the grounds and be 'a part of living history.' Many of them even had their young kids in tow, even though they were aware they would have to be standing for hours and after the ceremony would probably have to walk back miles to a station and a train that could take them back home.

There was clearly a unprecedented number of African Americans and the numbers clearly outnumbered the Million Man March organized nearly a decade ago by Black Muslim leader Louis Farrakhan.

Many of them sported T-shirts that read 'The Dream Realized,' while there were also some unique one with the faces of 43 white men and the final face, an African American.

Image: Barack Obama [Images] places his left hand on the inaugural Lincoln Bible while being administered the oath of office by US Supreme Chief Justice John Roberts at the Capitol Hill. Wife Michelle and daughter Malia (R) look on.