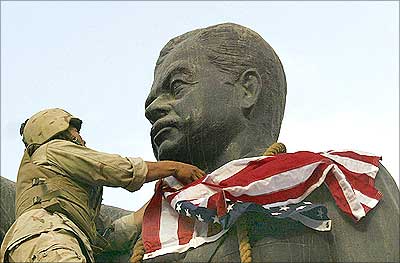 Some say Iraq was US President George Bush's [Images] magnificent obsession. Others say he was keen on concluding his father's unfinished business there: regime change in Baghdad. Whatever be the truth, Bush was adamant about getting into Iraq in the aftermath of 9/11, says Matthew Schneeberger in the latest in his series looking back at the Bush president, even if it meant glossing over the ground realities.

January 12, George W Bush [Images] gave his final press conference as United States president. And, given how massively unpopular he is especially at home, Bush was expected to wear an apologetic, beleaguered face.

In fact, he was quite the opposite: upbeat, positive, humorous. He joked with members of the press, wielded his trademark down-to-earth, folksy rhetoric and spoke to the American people directly. In short, he showed many of the qualities that helped him win national elections over formidable opponents in Al Gore [Images] and John Kerry.

But he also demonstrated traits that have dogged him throughout his presidency, such as stubbornly refusing errors were made in the run-up to the US invasion of Iraq. When asked to pinpoint a few of his missteps and mistakes, Bush could only cryptically speaks of "disappointments" before segueing into discussion of the "highly successful and at the time unpopular" troop surge, which he credits for the drop of sectarian violence in Iraq.

Today, many commentators, both Bush administration insiders and outsiders, claim that the president had made expelling then Iraqi dictator Saddam Hussein [Images] one of his top priorities, long before the September 11 attacks.

But, in the early days of the administration, other than Saddam's repeated shows of defiance to the United Nations, there was little justification for military action against Iraq.

9/11, however, caused a massive shift of American consciousness. Suddenly, national security and arguments related to it took precedence over all others. To be seen as weak on terror was the death knell to a politician's career, and members of Congress engaged in a kind of competition to see who could bend over further to toe the administration's line.

And the administration's line was straightforward, encapsulated best by a single three-word acronym: WMD.

Saddam was developing Weapons of Mass Destruction and would not hesitate to use them, it was argued. Any talk that attempted to discredit this was swept aside as na�ve pacifism.

When, in September 2002, Condoleezza Rice [Images] said, "We know that (Saddam) has the infrastructure, nuclear scientists to make a nuclear weapon. We don't want the smoking gun to be a mushroom cloud," it became clear that the US was laying the groundwork for an offensive in Iraq.

The next month, by an overwhelming vote (including that of US Senators Hillary Rodham Clinton and John Kerry), the US Congress, by passing the Use of Military Force Against Iraq Resolution, gave the president the authority to take military action against Saddam.

Of course, there were sane voices, but it seemed no one in the government was listening. Sir Jeremy Greenstock, the British ambassador to the United Nations and later the British special representative in Iraq, has said, "When I arrived in New York in July 1998, it was quite clear to me that all the members of the (UN) Security Council, including the United States, knew well that there was no current work being done on any kind of nuclear-weapons capability in Iraq. There was never any proof, never any hard intelligence, that they had succeeded in doing that. And the American system was entirely aware of this."

All the while, Hans Blix, chief UN weapons inspector, was conducting a survey of Iraq's WMD capabilities. When he repeatedly found nothing and said so, the US grew impatient. Blix, recalling a meeting with Vice President Dick Cheney, said: "We said that we had performed 700 inspections in some 500 different sites and found nothing. (But) I think what (Cheney) wanted to say was that if you guys don't come to the right conclusion, we will take care of the disarmament."

A few months later, in January 2003, Bush gave his second State of the Union Address. His speech made the case for war in Iraq, relying largely on a since discredited forged document that stated Saddam had sought uranium from Africa. A week later, Colin Powell appeared before the United Nations Security Council only to make many of the same faulty arguments with the same faulty intelligence.

War was on the horizon. And though the initial offensive had been meticulously planned, the post-invasion occupation was belatedly and haphazardly slapped together in the final few weeks.

March 19, 2003, the Iraq war began with two weeks of 'shock and awe' bombardment, followed by an invasion of ground forces.

At the time, Donald Rumsfeld estimated that the war would cost around $30-50 billion and would be over in months. Six years on and at least $1 trillion later, the war still rages.

Matthew Schneeberger is an American reporter who works at rediff.com's editorial headquarters in Mumbai [Images]

Image: A US marine covers the face of deposed Iraqi President Saddam Hussein with an American flag in Baghdad on April 9, 2003. Soon, realising that this could provoke sentiment in Arab streets, it was quickly changed to an Iraqi flag. Photograph: Goran Tomasevic/Reuters

Tomorrow: The cost of Iraq