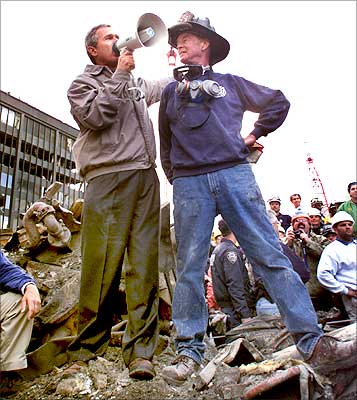 For the new American president, the 9/11 terrorist attacks turned out to be a trial by fire. To his credit, George W Bush [Images] seized the day, says Matthew Schneeberger in the third of his series on looking back at the outgoing American president. Roughly 12 hours after terrorists hijacked four commercial airliners in order to perpetrate unprecedented attacks on America, President George W Bush addressed the nation at 8.30 pm in a televised statement from the White House:

'Today, our fellow citizens, our way of life, our very freedom came under attack in a series of deliberate and deadly terrorist acts. The victims were in airplanes, or in their offices; secretaries, businessmen and women, military and federal workers; moms and dads, friends and neighbours. Thousands of lives were suddenly ended by evil, despicable acts of terror. The search is underway for those who are behind these evil acts. I've directed the full resources of our intelligence and law enforcement communities to find those responsible and to bring them to justice. We will make no distinction between the terrorists who committed these acts and those who harbour them.'

This speech marked the public introduction of the Bush doctrine on foreign policy -- that the United States has the right to aggressively secure itself from countries that harbour or give aid to terrorist groups.

The Bush doctrine has since provided the intellectual framework for war in Afghanistan and later in Iraq. It has since legitimised rhetoric like the 'Axis of Evil' when describing North Korea and Iran. It has since been called the clearest manifestation of America's irrational turn to unilateralism over international cooperation.

But, forgetting all that for a moment, Bush's address was exactly what the American people needed on that fateful day, when so many were confused, scared and angry, when so many worried that more attacks were around the corner. They needed to be told that this would not and could not happen again.

In fact, despite being a massively unpopular president, most Americans still feel gratitude towards Bush for his handling of 9/11 and its immediate aftermath. For his few remaining fans, those actions will forever define his presidency in a positive light.

Of course, not all shared such a rosy view of the administration's response. Former White House chief counter-terrorism adviser Richard Clarke has said:

Second in the series: After 9/11, Bush suddenly had political capital

'That night, on 9/11, Rumsfeld came over and the others, and the president finally got back, and we had a meeting. And Rumsfeld said, 'You know, we've got to do Iraq', and everyone looked at him -- at least I and Powell looked at him -- like, 'What the hell are you talking about?' And he said -- I'll never forget this -- 'There just aren't enough targets in Afghanistan. We need to bomb something to prove that we're, you know, big and strong and not going to be pushed around by these kind of attacks.' And I made the point certainly that night, and I think Powell acknowledged it, that Iraq had nothing to do with 9/11. That didn't seem to faze Rumsfeld in the least. It shouldn't have come as a surprise. From the first weeks of the administration they were talking about Iraq. I just found it a little disgusting that they were talking about it while the bodies were still burning in the Pentagon [Images] and at the World Trade Centre.'

Perhaps Clarke is right, that members of the administration saw 9/11 as a stepping-stone to some of their own dubious goals -- namely, war in Iraq.

But watching Bush at Ground Zero in New York City on September 14, three days after the attack, one saw a president employing all his faculties in order to deal with a tremendous tragedy. One saw a president consumed with responsibilities but determined to meet them head on to the best of his capabilities.

Bush mourned with families who had lost or were still searching in vain for loved ones. He consoled victims, many times physically embracing them, while fighting back his own tears. He profusely thanked fire-fighting and police personnel, the average Joe on the street, and the American people at large for their collective humanity.

Then, with the world watching, he stood atop a mound of World Trade Centre rubble, a bullhorn in hand, and proclaimed:

'I want you all to know that America today is on bended knee in prayer for the people whose lives were lost here, for the workers who work here, for the families who mourn. This nation stands with the good people of New York City, and New Jersey and Connecticut, as we mourn the loss of thousands of our citizens. The rest of the world hears you. And the people who knocked these buildings down will hear all of us soon.'

And America responded in kind. In a week's time, Bush went from a dawdling, unpopular president to the most popular on record, with over 90% of Americans expressing their approval. Suddenly, America's questions about George W Bush -- about his (decidedly limited) foreign policy qualifications, about the legitimacy of his election, about his style of governance -- were swept aside.

Democrats in the US Houses of Congress, who had earlier grown wary of Bush and his surrogates, gave the president every possible measure of support.

Americans were prepared to stand as one, behind their commander in chief.

Would he prove a competent leader? The world would find out soon enough.

Matthew Schneeberger is an American reporter at rediff.com's editorial headquarters in Mumbai [Images]