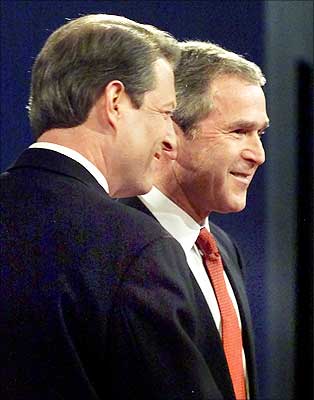 For America and the world, it has been a rollercoaster ride with George W Bush [Images] at the White House. It is arguable if the Bush presidency represents the lowest point in the perception of America across the world, but what is not is that Bush has made his country, and the world, a far different one -- some could even say, unsafe one -- than it was on January 20, 2001.

Matthew Schneeberger, an American reporter at rediff.com's editorial headquarters in Mumbai [Images], looks back on the 43rd president with wonder and amazement: How could things have gone so wrong?

It's safe to say that George W Bush -- outside the most loyal of US Republican circles -- is an unpopular president, never mind that India's Prime Minister Manmohan Singh [Images] believes Indians simply love him.

During 2008, his approval rating in the US dipped below 30%, bottoming out at 19%, the lowest on record. Lower than then US president Richard M Nixon in his final days in office, when he resigned in disgrace following the Watergate scandal.

This contempt manifested itself in the November 2008 US presidential and congressional elections, when Democrats took back the White House and established decisive majorities in both Houses of the US Congress. Pundits have called it a clear voter mandate, some claiming that the massively unpopular Bush and those connected to him have damaged the Republican Party's brand name for decades to come.

In 2008, Bush's last full year in office, the US economy shed an estimated 2.4 million jobs, its worst single year loss of employment in over six decades.

Why India is upset with George Bush & Co

This figure provides an exclamation point to a year's worth of bleak economic news and harrowing forecasts. Remember, when then president Bill Clinton [Images] left the Oval Office in January 2001, the unemployment rate was 4.2 per cent. Today, it's at 7 per cent and, by all accounts, spiralling upward.

Moreover, in 2000, the year before Bush became president, the US government reported a $236 billion annual budget surplus. By 2008, that surplus became a record $400 billion or $500 billion deficit (no one knows for sure). Not to mention the nearly $1 trillion in bail-out money the government has earmarked for various collapsing businesses in the past few months.

In fact, under Bush's eight-year stewardship, the federal deficit has almost doubled, from $5.6 trillion to $10.6 trillion. The dollar has been devalued. The financial sector is in crisis.

'The US is perceived as hypocritical'

Some of Bush's economic failures might be forgivable had he made major strides in the foreign policy arena. But today the US is mired in two expensive, protracted wars -- Iraq and Afghanistan -- and sustainable peace seems far-off in both countries. Globally, the perception of America has diminished, with Bush an easily identifiable symbol for the massive and growing anti-US sentiment in many parts of the world. Going to war in Iraq, virtually unilaterally and on dodgy intelligence, plus allegations of improper detainments at Guantanamo Bay and prisoner abuse at Abu Ghraib in Iraq, have raised questions about the US's commitment to human rights.

And, every step of the way, with his folksy rhetoric and lack of gravitas, Bush has provided endless fodder for late-night comedians, political commentators, academics and the international media.

Last month, just when it seemed that Bush's term might end quietly and without incident, an Iraq journalist hurled shoes and abuses at him in front of a worldwide audience, becoming an instant celebrity in the process. Photographs and videos of the incident will doubtless remain indelible images of the Bush presidency.

So how did we get to this point, where the US president -- the ostensible leader of the free world -- is disrespected in a most serious manner and the incident is considered funny and deserving?

The presidency of George W Bush began on an inglorious note: he actually lost the popular vote in the 2000 presidential election.

But because America determines her President through a group of 538 representative voters called the Electoral College, which essentially makes the contest a composite of 51 separate races (one in each of the 50 states plus one in Washington DC), by sweeping rural and less populous states, Bush was able to cobble together the Electoral College majority he needed for victory: 271 to Gore's 266. Bush was just the fourth candidate to have lost the popular vote and yet still win the election.

It helped that his brother Jeb Bush was governor of Florida [Images] (the state's chief executive), the definitive state in the election. Had Gore won Florida -- and he lost there by only a few hundred votes, a race so close that the US supreme court was forced to make a ruling -- Bush would have never occupied the White House.

From the start, Bush was hounded by questions of legitimacy. Given the controversial circumstances surrounding his victory, many said he did not 'speak' for the American people. As a supposedly 'weak' president (in electoral terms), he would need to be conciliatory in his dealings with Congress and other branches of government.

And, in fact, during his campaign, Bush had run as a so-called 'Compassionate Conservative' who wanted to be a 'uniter' rather than a 'divider'.

In addition to traditional Republican promises like strengthening national defence and cutting taxes, he also made education core part of his platform, which helped him to siphon away many Democratic votes -- education is generally a 'Democrat' issue. But it also suggested that Bush would be willing to comprise. Congressional Democrats hoped his narrow victory and non-partisan campaign rhetoric would translate into pragmatic, non-partisan governance.

They were sorely, sorely mistaken.

Image: A photograph from 2000 of George W Bush and his Democratic rival for the American presidency, Al Gore, during one of their presidential debates. Photograph: Reuters