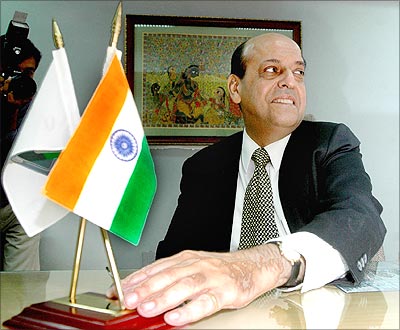 If Chief Election Commissioner N Gopalaswami [Images] lives by the rulebook, so does his colleague Navin Chawla [Images]. Only that the book is written by him and the rules are his own.

A very recent incident, which many people in Delhi [Images] recall, is when Union Minister T R Baalu wanted an urgent clarification on a technicality while he was in Tirumangalam, Tamil Nadu, for the high-profile by-election.

For internal purposes, the CEC and the ECs have divided states among them. Goplaswami, a Gujarat cadre officer from Tamil Nadu, handed over control of the southern states to Chawla.

Knowing this and keeping in mind his past connection with Chawla -- he was an additional secretary in the environment ministry when Baalu was the minister -- the minister took the liberty of calling up Chawla directly on his mobile phone. There was no reply.

Since it was election eve, and Tamil Nadu's octogenarian Chief Minister M Karunanidhi [Images] was with him, Baalu was desperate to get the clarification. He called Chawla's mobile phone seven times in less than an hour. When he finally got around to him, though his office and residence, Baalu lashed out at Chawla for what he termed his 'colossal audacity'. Chawla was unperturbed.

"Chawla refused to give out his number and asked Maitreyan to call his office and register his number with his personal secretary. Maitreyan lost it," said an observer who witnessed the incident.

What followed next is testimony to Chawla's people's skills.

"Maitreyan said the phone was given by the government and comes from the taxpayer's money. Chawla changed track and said, 'Oh yes sir, absolutely. You have a valid point there,' and as Maitreyan was just about cooling down, Chawla had disconnected.

He never got his phone number.

Likewise, when Chawla calls somebody, his number never flashes. The caller is only identified as a private number," the observer said.

If this is how Chawla behaves with ministers and MPs, it is because he can afford to do it.

Insiders say this is mostly because he is efficient in what he does and has virtually made himself untouchable.

"He is highly efficient in whatever he does and applies himself to it. When he was the secretary at the information and broadcasting ministry, he used to spend a lot of time in the library. Junior officers and lesser peers were in awe of him," an insider said.

If Gopalswami is defined by his distance from political bosses, Chawla's career -- and all the controversies surrounding it -- was shaped by his political affinities. To be fair to him, it was a vicious loop over which he had no control.

Chawla went to the same school as Sanjay Gandhi [Images] for two years. The friendship that developed there led to his first unfortunate tryst with polity.

During the Emergency he was the secretary to Delhi's lieutenant governor. But he was seen as wielding more powers than the governor and acted as Sanjay's henchman. The Shah Commission, which probed the excesses committed during the Emergency, did not fail to notice this.

The Commission indicted Chawla for having been 'authoritarian and callous' and for gross misuse of power 'in cynical disregard of the welfare of citizens. In a crippling blow, the Commission noted: 'He is unfit to hold any public office which demands an attitude of fair play and consideration for others'.

Chawla was banished to the administrative backwaters of the Andaman and Nicobar islands [Images].

"That period almost broke him. But he fought on with resolve and was determined. It was at this period that he turned to Mother Teresa [Images] for solace," an insider said.

Already a fiercely private person, he grew more aloof in those years, people say. Every IAS batch has groups of thick friends. But nobody from the 1969 batch speaks to Chawla.

"All sophisticated officers in their own right, they see Chawla as being a bit too sophisticated for their liking," an observer said.

Though he successfully found his way back into the administrative mainstream, controversies also followed him back to Delhi.

"He did not choose his political connections, they were already made," said an insider.

If such close personal ties defined his Congress connections, the treatment meted out by Delhi Bharatiya Janata Party [Images] leader Sahib Singh Verma made him bitter towards the saffron party.

Chawla apparently faced repeated harassment when Verma was chief minister and he was part of the Delhi administration. Chawla never forgot that. But again as an example of his people's skills, he managed to -- or at least tried his best -- get into Verma's good books.

Some say it is in keeping with Chawla's nature.

Professionally, though he is efficient overall, Chawla's drafting skills stand out, people say.

"If Gopalswami's recommendation had thorough research and finesse as its pillars, Chawla's responses were no less and showed his language skills. It is a treat just to read the exchanges between the two," said an observer.

Ultimately what defines Chawla is the fact that he is a go getter and that more often than not gets away with it.

"Sample this: Gopalaswami has the correct number of security personnel in keeping with his Constitutional position. Not one cop less, not one cop more. Chawla has special CRPF (Central Reserve Police Force) detailing which is beyond his rank."

"When the CEC goes out, one car with a security person follows him. Chawla has an escort car, again disproportionate to his rank. Gopalaswami never eats out at dinner parties though he registers his presence and quietly leaves. Chawla is known to have annoyed the external affairs ministry, from which bureaucrats have to get approval before attending high profile embassy parties, on several occasions."

"And Gopalaswami lives in a Type 6 bungalow, which is in keeping with his office."

"This last example probably describes him best. Why and how he got that house, as with most things Chawla, remains unknown," an insider concluded.