I'll be very happy to take Rahul in Cabinet: PM

"I have tried many times but not succeeded," Singh said to a question whether he would like to have Gandhi in his Council of Ministers.

"I will be very happy to have him in the ministry," he said when asked whether he would like to take Gandhi in his ministry.

The PM was speaking at an award function organised by the CNN-IBN in which Gandhi was adjudged the 'Politician of the Year' for 'energising' the Congress and being the key strategist behind the party's revival in Uttar Pradesh.

Gandhi was not present to receive the award from Singh and in his message said he was in Uttar Pradesh for a prior engagement.

The young leader had earlier refused to join the Cabinet insisting that he preferred party work. Praising Gandhi, Singh said, "He has more than fulfilled the expectations we had but the best is yet to come."

To another question whether he had expected the Congress to get a comfortable majority in the May Lok Sabha elections, the PM said, "I was doubtful...".

To a query whether 2009 victory was the biggest moment in his life, Singh said he took things in their stride when they happened or did not happen . 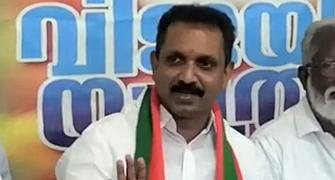