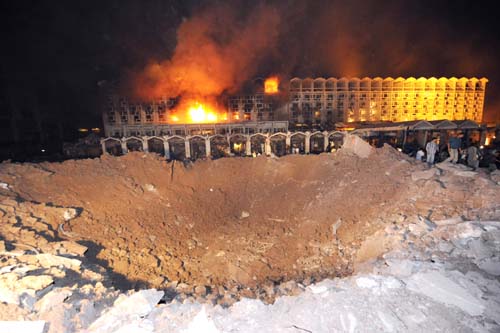 At least 60 people including foreigners were killed in a powerful blast outside the five-star Marriott Hotel in the Pakistani capital Islamabad [Images] after a suicide bomber rammed his explosive-laden truck into the hotel gate engulfing the building in flames.

A spokesman for the Indian High Commission told PTI that no Indians were present in the hotel at the time of one of the worst terror attacks in the country in which about 1,000 kg of explosives were reported to have been used.

ARY TV reported that 60 people had died and 200 injured in the explosion in which the popular American hotel chain was targetted for the second time in 20 months. The blasts were the most intense explosion ever in the country at one particular spot,according to officials.

Reports late on Saturday said that two-thirds of the 290-room hotel were destroyed in the blast which occurred at about 8 pm local time, in the heavily guarded part of Islamabad. Several US officials were believed to be in the hotel at the time of the blast which would have been packed with diners including Muslism breaking the Ramzan fast.

The major explosion was heard from several kilometres away and created a crater about 20 feet deep and 30 feet wide. Among the dead were policemen and private security guards deployed in the vicinity of the hotel. There was no immediate claim of responsibility for the blast.

The explosion sparked a massive fire that gutted the hotel and officials said they feared the six-storey structure might collapse. The blast destroyed at least two dozen cars parked outside the hotel and damaged nearby buildings, including the headquarters of state-run PTV.

Witnesses said the blast occurred shortly after a truck drove up to the hotel, which is very popular with foreigners. There were reports that a car had penetrated a security cordon first.

The blast crater in front of the Marriot in Islamabad