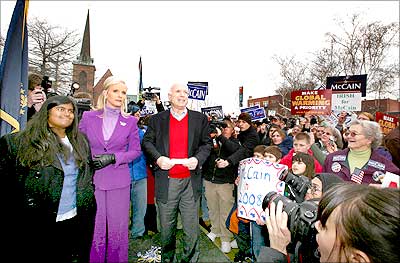 But, until Wednesday, many didn't realise that, this Presidential election, US Senator John McCain [Images] may have the strongest link to the sub-continent of all: His 17-year-old daughter Bridget is a Bangladeshi, who was adopted when she was still an infant.

Obama is a symbol as was Rajiv

Wednesday night, after sitting on the sidelines for much of McCain's political career, Bridget was suddenly front and centre for the first time, when her life story was told at the Republican National Convention in Minnesota.

Cindy McCain, Senator McCain's wife, has a history of philanthropy and making trips on behalf of the charities she's in the past managed. On one such trip, 17 years ago, Mrs McCain visited an orphanage in Dhaka, Bangladesh, run by Mother Teresa's nuns. There, among 160 other orphans, was Bridget, at the time suffering from a cleft palate.

Fearing the worst should Bridget not receive medical attention, Mrs McCain argued with Bangladeshi authorities until Bridget's visa papers for the US were arranged.

Cindy did all this without informing Senator McCain, who learned of the adoption only after the formalities had been taken care of. Despite his relative shock, Senator McCain quickly grew fond of his baby daughter, and Bridget rapidly assimilated into the McCain family fabric. Today, Senator McCain says he is thrilled with his wife's decision and that he is a happy father, adding that Bridget has enriched the lives of the entire McCain clan.