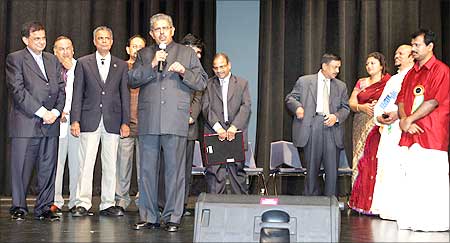 Revealing this to the media at the Indian consulate in New York, Ravi explained: "Complaints about non-resident Indians deserting their wives are skyrocketing. In Punjab alone at least 20,000 cases are pending against NRI husbands."

Ravi is in the United States with a team of 17 Indian members of parliament and two state ministers.

The government of India has enacted laws to prevent marriage fraud, but families still need to be vigilant, he said.

"Women approaching me, crying, to tell me their plight is a common thing. We want to prevent men using marriage to cheat poor women and leave them after some time," he said.

Ravi said several men in the US had also complained to him about women misusing Article 498A of the Indian Penal Code, which gives the police power to arrest the husband and his family immediately after a woman complains of harassment.

"There may be a few instances of the Article being misused," Ravi said, pointing out that its good points outweighed the bad ones. So there was little likelihood of the law being repealed, he said.

The Indian parliamentary delegation was in the US to interact with American lawmakers, Ravi said. The delegation will return to India September 21.

"All members of parliament from the northeast [of India] are in the team. The lone MP from Ladakh [in Jammu and Kashmir [Images]] and an MP from Kashmir are also part of the delegation. Many of them do not get chances to visit the US," Ravi said, pointing out that the delegation had members of different Indian political parties.

At the reception, the minister invited Indian Americans to attend the Pravasi Bharatiya Divas celebrations scheduled for January in Chennai.

Later, he told India Abroad that the event is not a wasteful effort. "It brings more unity to people in many countries; it points out the problems they face and also it contributes for the growth of their ancestral land," he said.

Speaking of the political situation in India, he said the election fever is yet to commence.

"We want the economic gain to reach the lower rungs of society," he said. "Prime Minister Manmohan Singh [Images] and Congress [party] President Sonia Gandhi [Images] are very keen on this. The government's rural employment labor program aims to provide jobs for the poor in the villages for at least 100 days a year. When it is established in more areas, millions will benefit from that."

He admitted that communalism is a worrisome problem. India has seen attacks against Christians in Orissa and Karnataka in recent weeks.

"The tension was brewing for many years. We cannot blame anybody for that," the minister said.

He said his workload has increased tremendously after taking additional charge of parliamentary affairs. "It had its tense moments like the recent trust vote," he said.

At the Onam celebrations (see the picture) organized by the Kerala Association of New Jersey in North Brunswick, Ravi congratulated the community for keeping Indian traditions alive in America.

"I feel that Onam and other traditional festivals are celebrated with more fervor by NRIs than the people in Kerala," he said.

Presenting a plaque to Ambika Sukumaran, Indian actor of the 1960s who has been a longtime resident of New Jersey and a noted dance teacher, Ravi said he remembered her roles. He said he had wondered where she had gone and was happy to see her 30 years later.

More than a thousand people attended the Onam celebrations, which began with the traditional feast. It followed the chenda melam, a reception to Mahabali, the mythical king of Kerala, played by George Thumpayil, with thalapoli by women and various cultural programs.

A group of people led by Alex Koshy submitted a memorandum to the minister, addressed to the Indian prime minister. It condemned the violence against Christians in Orissa and Karnataka and asked for action to protect communal harmony. It also noted a growing worry of Christians in India and abroad � that the Congress party's commitment to secularism is waning.

The memorandum demanded immediate restoration of law and order in Orissa, providing necessary help to the victims of violence, ordering of a Central Bureau of Investigation probe into the killing of Swami Lakshmanananda Saraswati and the attacks that followed, and a ban on the Vishwa Hindu Parishad.