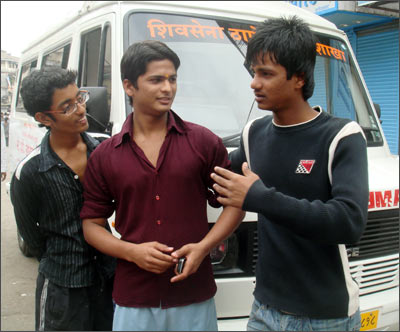 The Batliwala chawl is opposite Nariman House, where commandos have waged a 40-hour battle against terrorists. Last night, its residents were evacuated as the operation intensified.

"The terrorist uncle was shooting. I could hear the guns and was terrified. I also saw one uncle climb up the pipe," says Aishwarya [Images] Gaekwad, a Class VII student, innocently.

The residents of the chawl spent the first night and the next day, huddled together. They were too afraid to sleep, or look out of the window. As evening fell, they were evacuated. While others went to stay with family and friends, a group of families from Batliwala chawl, took refuge at a Shiv Sena shakha nearby.

Over a lunch of rice and curried vegetable provided for them, they say Nariman House was regularly visited by foreigners. But never did they think it would become the epicentre of a battle with terrorists.

They do not know when the ordeal will be over, when their lane will be secure and when things will be normal again. The last two days have left the residents of this busy Colaba market area in extended disbelief.

"I used to walk home every night through this lane outside Nariman House and look what is happening there now?" says Rahul Rakh who works at a cyber cafe nearby. He hasn't gone for work for two days, because the cyber cafe along with other shops in the cordoned area has been closed.

He feels he has a sort of unexplainable proximity to the horror that has unfolded around him. "I feel so weird, terrorists took over a building near my home and work place -- and Cama hospital, which became a target of their attack, was where I was born."

Just like many others in the maze of lanes around Nariman House, Rahul and his friends have been trying to get as close as the police would allow them to see what is happening.

Often personnel from the Rapid Action Force, clear them off and prevent them from assembling in groups but curious onlookers keep on coming.

Vikram Singh and his friends have come from Matunga in north-central Mumbai to see what is happening. Yesterday, they went to all the other spots of the attacks -- VT, Taj, Oberoi, Cama -- "Do you want to see the firing?" he asks, "I can take you through the back lanes and show you."

Explaining his presence, he says he has come to help but does not know exactly what to do. "For my country I can do anything, if I had a gun and was allowed to go in, I would have also gone and taken on terrorists," he says vehemently and goes on vent his disappointment at the Mumbai police.

"They can only pull you over and bully you, they are such a failure when it comes ensuring security. They need young cops, better weapons and good training."

Mumbai is beloved to him and its repeated destruction anguishes him. He says he sees his beloved city lurch from one terror strike to another with no government plan to confront it. "Mumbai has become Kashmir, it is so tragic" he says, getting ready to ride pillion on his friend's bike to go to another terror spot.

Image: Rahul and his friends discuss the Nariman House siege, a few lanes away from their building. Photograph: Seema Pant

Also read:
'Rabbi Holtzberg has suffered a lot of hardship'
'Moshe was very thirsty and scared'
'We ere told not to make any sound'
'You believe in your army'