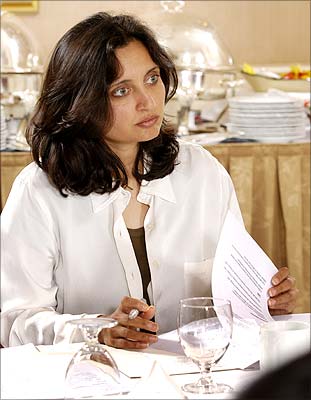 Sonal Shah, currently director for Global Development at google.org in promoting the firm's philanthropy will serve on President-elect Barack Obama's [Images] official 15-member transition board to be announced on Wednesday.

The board will be chaired by John Podesta, former President Clinton's chief of staff, who founded the progressive think tank, Centre for American Progress, where Shah worked after her stint with the Clinton Administration 1995-2000.

Meanwhile, Preeta Bansal, partner at the international law firm of Skadden Arps and a senior adviser on the Obama campaign, and former Solicitor General of New York, is also expected to play a significant role in terms of staffing of the new Obama administration on the personnel side and will be one of five key advisers "who will be doing the personnel operations for the new administration in terms of getting people placed," one insider told rediff.com.

An ad-hoc transition team had been in operation since August after Obama clinched the Democratic primary and his party's presidential nomination beating out Senator Hillary Clinton [Images], but now it will be formalised in the wake of Obama's blow-out of the GOP nominee Senator John McCain [Images] in the presidential election.

Shah, although not as visible an Obama activist as Bansal, had been brought into the transition team in the summer by her old boss Podesta, and told rediff.com that she will be taking a leave of absence from google.org for the next two-and-a-half months at least till Obama is sworn in January 20 as the 44th president of the United States.

While Bansal will be working on personnel operations beyond January 20, her name is also been thrown up for a senior level position in the Department of Justice, and speculation is rife that she could be the new Solicitor General.

However, Bansal has been keeping a low profile and told rediff.com that she didn't want to comment on the speculation or her duties as part of the personnel selection team, but insiders said, "She will be very heavily involved on the personnel side."

There was also speculation that Neera Tanden, who served as senior domestic policy adviser on the Obama campaign, after the Clinton campaign -- for which she worked in the same capacity -- wound up, was also likely to be offered a senior position in an Obama administration.

Another name that could figure, although  not in Washington, but in Ohio was that of another long-time supporter of Obama and contributor  to his campaign, Subodh Chandra, former Cleveland Law Director, who could be tapped as US Attorney for Ohio.

If Chandra gets this position, it could set him up for a subsequent political run if he wishes to remain in Ohio, one insider said, recalling Chandra's unsuccessful bid for Attorney General of Ohio.

There could be also junior positions for the likes of the founders of South Asians for Obama -- Hrishi Karthikeyan, Nick Rathod, and Dave Kumar -- these insiders acknowledged, although these appointments would likely be made only once the Obama administration is up and running and into March or April.

"There have been hundreds and hundreds of resumes that have been pouring in," one source said, and said another name being thrown around is New Jersey's Secretary of Transportation, Kris Kolluri for a senior position in the US Department of Transportation in an Obama administration.

But the source asserted that while "ultimately, we want the most qualified people in positions, but all of the other things being equal, we are going to give precedence to people who believes in Barack's vision of transformation from the beginning."

Shah said as a member of the transition board, her responsibilities and that of the others would involve "planning through the transition," till January 20," and "getting the things ready for the team that will take over in the government and giving them the option and handing them what they can go do, so that they can do it."

"Our job is to get everything ready in the next 76 days for them to do their job better," she added.

Shah said that she would be on the policy side while there were teams looking at personnel, and another team looking at the various government agencies and reviewing them.

"Mine will involve the technology innovation side of this -- what are the policies that people are going to look at, what's been done in the states, what are the things that we might take from there," she said, and added, "We talk about a 21st century government but how do we create it?"

Podesta would continue to chair the board but once Obama's chief of staff comes in, "he will be getting ready for the White House," she said.

Rahm Emmanuel, chairman of the Democratic Caucus and long-time Obama friend and confidant from Chicago, who was elected to the US Congress in 2004, has been tapped by Obama for the Chief of Staff position, but is said to be agonizing over it since he could also rise fast in the hierarchy of the Democratic lawmakers on Capitol Hill, with the Speaker's slot a possibility in a few years.

Shah acknowledged that once the chief of staff comes in, he would be directing the personnel operations and deciding on what happens after January 20 while Podesta "will be managing the transition."

After her stint in the Clinton Administration from 1995 to 2000, first in the Department of Treasury and then in the National Security Council, doing international economics, Shah left to join the newly formed Center for American Progress under Podesta.

After nine months, she joined Goldman Sachs in New York, before moving out to California for her present job with google.org.

Sonal Shah was chosen as the Person of the Year in 2003 by India Abroad, the newspaper owned by rediff.com in the US.