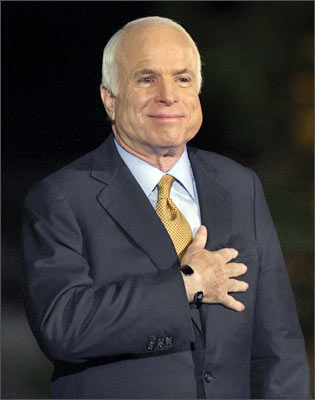 In a emotional address to his supporters at Phoenix in his home state Arizona minutes after CNN projected Obama as the winner, McCain urged all Americans to shed their differences and cooperate with the Illinois Senator to bring the country out of the "difficult" times.

"I urge all Americans to shed their differences to make the United States more stronger and better country for our grandchildren," the 71-year-old Vietnam War veteran told thousands of his supporters.

"I pledge to him (Obama) tonight to do all in my power to help him lead us through the many challenges we face,"

"The American people have spoken, and spoken clearly," the Republican nominee said.

McCain said it was a long and hard fought elections on the 21-month long campaign trial and said it was a "historic" victory for Obama.

"Tonight there will be disappointment. But, tomorrow morning we will start supporting the President-elect," McCain told his supporters.