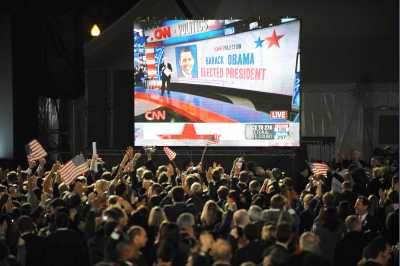 Democratic Party nominee Barack Obama [Images], by retaining all of John Kerry's 2004 electoral votes and winning seven states that voted for GWB in 2004, won the 2008 US Presidential Election to become the 44th President Elect of the United States of America. He will be the first African American to hold the post, and at 47 years old, one of the youngest.

Most impressive were Obama's wins in Virginia, which had voted Republican for president 44 years in a row, and Ohio, the state that secured George W Bush's second term in 2004.

In Ohio, heading into the election, polls showed Obama with a 3-5 point lead there, but many commentators speculated that the so-called Bradley Effect -- which posits that white votres are afraid to admit they will not vote for a black candidate and thus skew poll numbers -- would deliver victory to McCain.

But it turns out that predominantly white states such as Iowa, Wisconsin, Ohio, Minnesota and many others had no problem electing Obama, in a clear refutation of the Bradley Effect's purported influence.

Only the Deep South and Bible Belt areas, America's most socially conservative and highly religious regions, resoundingly rejected Obama. He was trounced in Tennessee, Oklahoma, Arkansas an others, but this was expected.

In addition to the historic presidential contest, which shares similarities with the 1860 election of Illinois politician Abraham Lincoln, US voters were also at the polls to determine the make-up of Congress, the bi-cameral legislative body much like India's Parliament. Thus far, it appears that a number of races will go to the Democrats, with voters giving a clear mandate to the Democratic Party, who will now enjoy sizeable majorities in both houses of Congress to go along with control of the Executive Branch. It's the first time Democrats have controlled both Congress and the Presidency since Jimmy Carter in the late 1970s.

These are the latest projections from the US presidential election, updated minute by minute.
Click here to refresh the page.

The winner needs 270 electoral votes to win the White House.

The one state the McCain campaign had hoped to wrest from the Democrats, owing to John Kerry's razor-thin victory in 2004. But soon after the polls closed, all major outlets projected Pennsylvania to Obama by a comfortable margin.

McCain has enjoyed success here in the past, in the Republican primaries of 2000 and 2008. And the state, in 2000, was the only state in the Northeast to vote Republican. But Obama ruled the day

No surprise here. Though polls had tightened in recent weeks, Obama maintained a comfortable lead up through election day, resulting in a relatively easy win.

This was never in doubt, another decidedly liberal Northeast state

Again, one of the centres of the Democratic Party, and was never in doubt.

McCain polled slightly better here than in other Northeast states, but an Obama win was assured.

A diverse, Democratic state through and through. Was always going to go for Obama.

Like New Jersey, a very reliable Democratic state that is one of the most ethnically diverse in the nation.

Barack Obama, a US Senator from Chicago, Illinois, was never going to lose his home state

The District of Columbia, like Delhi [Images], is its own autonomous territory, rather than part of a state. It is the most consistently Democratic area in the country.

When McCain pulled his staff and advertisements from Michigan a few weeks back, most political pundits knew this race was over.

Like Iowa, a predominantly white state that depends on agriculture but still votes Democrat. A McCain victory here would have been incredibly unlikely.

A solid Democrat stronghold that was always going to vote blue.

There was hope among Republicans that this Northern state could be turned Red, as the 2004 election was a close victory for John Kerry. The Republicans even held their National Convention here in early September, but to no avail. Obama coasted to victory.

The proverbial straw that broke the camel's back. Bush carried Ohio in 2000 and 2004, but McCain's been losing ground in light of a floundering state economy. When the networks began to declare Ohio for Obama, the McCain camp started sending off e-mails that basically conceded victory to Obama.

More evidence that Hispanic voters are increasingly aligning themselves with Democrats. This state went Red in 2004, but an Obama victory was projected early on, soon after the polls closed.

The state where Obama began his brilliant campaign with a surprise victory over Hillary Clinton [Images] and John Edwards [Images] in the Democratic Primary. Though there are very few minorities in Iowa, and the state voted for George W Bush [Images] in 2004, Obama has led here throughout. This was not a surprise.

This one was never in doubt. The nation's most populace state was always in the bag for Obama, putting McCain at a big disadvantage from the start.

The Pacific Northwest has become increasingly reliable for the Democrats. Oregon didn't disappoint.

One of the big bellweather states for this election was Colorado, a traditionally Republican and fiercely independent state that has recently lurched leftward. The Democrats, by hosting their National Convention in Denver, confirmed their commitment to the state, for which it was rewarded handsomely, by a sizable Obama victory. Obama's lead sits at around 20% at the moment, a total blow-out.

The McCain campaign seemed confident about Nevada throughout the campaign, though polls increasingly showed him slipping to a double digit deficit. Ultimately, this race wasn't close.

The final nail in the coffin for McCain were the polling results from Virginia's urban counties, which propelled Obama to an insurmountable lead in a state that McCain absolutely had to have. Virginia's demographics have changed recently, as high-tech jobs have reshaped the state's economy and allowed Democrats to make in-roads. It's the first time Virginia has voted a Democrat for President since 1964.

Part of the famed Bible Belt, Oklahoma is one of America's most socially conservative states. A McCain victory here was guaranteed.

Obama fared well in the urban areas of the state, but rural counties that voted at a 3 to 1 margin for McCain spelled defeat for the Democrats.

If Al Gore [Images], a Democrat, couldn't care his home state of Tennessee in 2000, Obama enjoyed little chance of knocking off McCain.

A very socially conservative state with one of the most painful legacies of the slave trade, where race relations still have a long way to go. An Obama win here would have been practically a miracle.

One of America's most impoverished and least educated states, West Virginia voters present an interesting case: depressed economically but incredibly socially conservative. An Obama victory would have been stunning.

Part of the Bible Belt, and choc-o-bloc with deeply conservative evangelical Christians, this state was never going to vote for Obama.

Part of the so-called 'Deep South', the only area of the country that voted McCain in a landslide.

A rural, fiercely independent state that values gun rights and religion. It was tailor made for McCain.

Part of the Deep South. There had been hope that Obama could make inroads here, but in the end the state delivered McCain a solid victory, as expected

The state of George W Bush was never going to elect Barack Obama. But changing demographics mean Texas could one day soon be in play for the Democrats, as whites have recently become a minority.

Part of the Bible Belt

The Deepest of the Deep South. The fact that Bobby Jindal, an Indian-American, serves as governor is remarkable. However, a minority who is also a Democrat � Barack Obama -- never had a chance.

The most religious state in America, home to the Mormom religion. Reliably Republican.

Interestingly, McCain thus far has not managed to flip a single Democratic state from the 2004 election, while Obama has already flipped Ohio, Iowa and New Mexico, thus all but assuring his victory.

Another Deep South state that emphatically rejected Obama; it's one of America's most impoverished states.

Part of the so-called heartland, or Bible Belt, Nebraska is an agricultural state based on conservative values.

McCain's home state, which he only managed to win by 9%. Had McCain come from somewhere else, Obama would have likely taken Arizona, which is one of America's fastest growing states.

Like North Dakota, Obama never entertained delusions that he would win in this sparsely populated, fiercely indepedenent state.

The home of Sarah Palin [Images] and a Republican bastion. Obama had no chance and McCain cruised to a comfortable victory.

Obama polled surprisingly well here, but election day saw him slip. He only lost in single digits, however, which is noteworthy in this traditionally Republican state