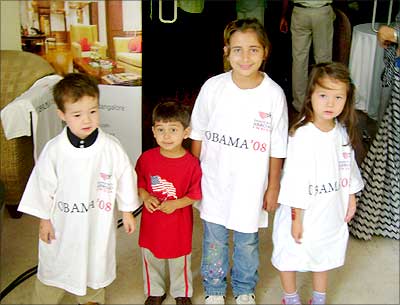 As the world celebrated the historic victory of United States President-elect Barack Obama [Images], Bangalore was not far behind. Obama's supporters had gathered at the Chancery Pavillion in Bangalore by the strike of dawn to catch all the election action on Wednesday.

By 8 am IST, it was clear that Obama was all set to create history. But his supporters didn't celebrate and waited for the final results.

Sean Olin Blagsvedt, chief executive officer of Babajob in Bangalore recalled their experience in the US presidential election in 2000. When the initial results predicted a victory for Al Gore [Images], they had started celebrating, but George W Bush [Images] had walked away with the presidency.

The lounge bar was packed with supporters of the next US President. Many sported pro-Obama T-shirts and badges.

One of the members said that they had planned to put up American flags and make the celebrations a grand affair, but changed their minds as they feared that the locals could cause trouble.

None of those present took their eyes off the TV. When the result was finally announced, a loud cheer went up and people were seen hugging each other and clapping enthusiastically. The event had its share of emotions too and many women were seen shedding tears of joy.

While Champaign flowed freely, the revelers decided to continue the celebrations later in the evening.

According to Obama's supporters, Bill Clinton [Images], the last Democratic President, handled the economy better than his Republican successor George W Bush. They feel that Obama's economic policies will benefit India in general and Bangalore in particular.

Supporters, who gathered here at the American Centre in the city, hugged each other with delight as the news of the 47-year-old's victory was flashed by television news channels.

Many Obama fans hailed his election as a vote for racial equality and hoped that his becoming president would herald an era of "less confrontational" .

"His election is a defining moment in history. It is an important turning point in world politics. I think his victory could overcome centuries of racial divide in American society," said Saurav Das, a student of University, who was at the American Centre here to see the live TV coverage of the polls.

The American Centre was specially decorated and around 300 people including school children were invited to witness the election results and subsequent celebrations on TV.

Giant video screens were put up at the Centre and tuned to various news channels including CNN and BBC. Each time Obama's win was projected in a state, a loud cheer erupted.