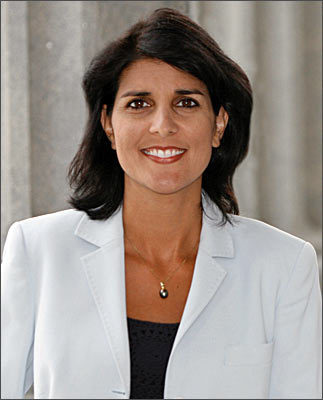 Representative Nikki Randhawa Haley was reelected for a third term to the South Carolina House of Representatives, defeating her Democratic opponent Edgar A Gomez, 59,with 83 percent of the votes.

Haley collected more than $100,000 for the campaign while her opponent collected only about $2000, a spokesperson for Haley's campaign office said earlier.

After filing for reelection Haley, 35, said, "When I first ran for office four years ago, I ran to make a change. I ran to change how business gets done at the State House. I ran to deliver real property tax relief to our hard-working families, and I ran to help make government more efficient and more effective. In those four short years, we have made tremendous progress. I am proud of what we have accomplished, but I know there is still more we can do."

When she contested in 2004 for the first time, she did not face any opponent. But she had to defeat the incumbent for 30 years, Representative Larry Koon in the Republican Primary.

The 87th district is a southern district in South Carolina. People are mostly conservative and 90 percent of the voters are Republican.

During her last term she introduced bills that favour small businesses and overall uplift of the community. Her recent bill for accountability for legislators has attracted much attention.

Haley and her husband Michael reside in Lexington with their two children Reena, and Nalin. Haley graduated from Clemson University with a BS in Accounting.

During the campaign in 2004, the opponents used Haley's Sikh faith and ethnicity for their propaganda. They used her maiden name Randhawa to single out her.

She said she is Republican because it supports business and stands for many of the ideals she cherishes. She is pro-life also.

"I believe we have made tremendous progress in the past four years. We've cut taxes by $850 million including $500 million in property tax relief, passed one of the nation's strongest immigration reform bills, made South Carolina more business-friendly by reforming a broken workers compensation system and reducing frivolous lawsuits. But there is still more we can do to spur economic growth and job creation, and that's why I want to return to serve the people of District 87 in the State House," she said.