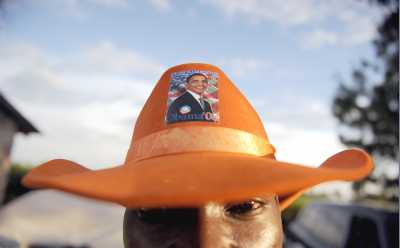 An African-American President of the US, a concept which was till now confined to the reel life in Hollywood turned real today with the election of Barack Obama [Images], the first Black who will occupy the White House.

The concept of a black president started in Hollywood long back in 20th century with movies depicting an African-American as occupant of White House.

In 'The Man' released in 1972, when the President and Speaker of the House are killed in a building collapse and the Vice President declines the office due to ill-health, Senate

In the 1998 sci-fi-drama disaster film 'Deep Impact', the black US president Tom Beck -- played by Morgan Freeman [Images] -- prepares for and destroys a fictional comet (named

"Wolf-Biederman"), which is expected to collide with the Earth and cause an Extinction Level Event.

Faced with a crisis, President Beck decides to make the knowledge of threat public and announces the grim facts: the comet, named "Wolf-Biederman," is seven miles wide, large enough to destroy civilisation if it strikes Earth.

The US and Russia [Images] dispatch a crew of astronauts on the spaceship Messiah to destroy the comet, using nuclear weapons.

In order to prevent opportunism, Beck freezes all wages and prices. In the end, comet gets destroy and Beck wins the heart of the people of America.

In the 2003 comedy movie Head of State, Mays Gilliam --played by Chris Rock -- surprisingly becomes candidate for the presidency after his party's original presidential and vice-presidential nominees die in a plane crash.

Assuming the election was already lost, the party decided to pick a likeable but losing minority candidate to improve their chances of another politician taking the office in the next presidential election.

At first, Mays feels he will not be able to succeed as president because he would be representing the entire African-American populace.

However, Mays begins to rise in the polls and manages to win the crowd over by speaking truth of the American life.            Mays ends up winning the election and the presidency, a reel life event made real by Obama today.

Image: A supporter of Obama at a village in his native Kanya. (File picture).