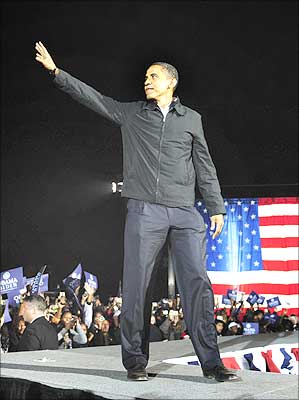 Ro Khanna serves as chair of the Indian American Council at the Democratic Congressional Campaign Committee for Speaker Pelosi in which capacity he has helped shape the innovation agenda for the Democratic Party. Ro was on the National Lawyers Steering Committee for the Hillary Clinton [Images] Presidential Campaign, and also served as a liaison to the Indian American community for the John Kerry campaign in 2004.

In 2006, the San Francisco Democratic Party and Speaker Pelosi presented him with the Trailblazer Award for his work in mobilising the Indian American community nationally. The San Francisco Chronicle has described him as a 'rising national star' in the Democratic Party. Ro currently practices law at O'Melveny & Myers, serves on the Board of Planned Parenthood in Northern California, and has been active in the Alameda county and San Mateo County Democratic Party.

As an undergraduate at the University of Chicago, Ro was one of a few volunteers to walk precincts with Barack Obama [Images] during his first campaign for the state senate. In an interview with Rujuta Paradkar, Khanna unravels the Obama Phenomemon.

I voted a couple weeks ago for Obama. Because I live in Fremont, I went to Alameda County Registrar of Voters office in Oakland to cast an early ballot.

Why did you vote for Senator Obama? What makes him the best candidate for the United States President's post?

Barack Obama has a vision for how to prepare America for greatness in the 21st century in a global economy and interdependent world. Obama understands that we need to be the innovators of the world. He has a plan for facilitating the creation of new jobs in the United States so we remain the economic superpower. He also believes that America's greatest power is that of our ideals, and that we should have a value-based foreign policy that stands up for freedom and human rights around the world.

You recently wrote an article in an Indian American community paper, titled The Strength of our Ideals: A case for Senator Barack Obama. Can you tell us more about it?

My basic argument in the article is that Barack Obama is an ideal spokesperson for American principles. America is the greatest country in the history of humanity because of our commitment to liberty and equality. We need a leader who can be an advocate for American principles, and convey to people around the world why they should stand with America -- why America embodies universal aspirations. Barack Obama has a unique ability to make that case.

If Obama wins, how will it affect the Indian American community directly?

Why does the Indian American community need to vote in this election?

As Americans, we have a duty to vote. There is no greater honour, no greater privilege than being a citizen of the United States of America at this moment in history. The decisions our country makes will shape the lives of millions of people, and will affect our environment for generations to come. We are fortunate that we have such an open political process. By voting, we live up to our responsibility as American citizens, and we have a say in the type of community, country, and world in which we will live.

The first step is to vote. Beyond that, individuals should volunteer in their local community, volunteer for the local party, run for office, serve on boards and commissions, and serve in appointed offices. You know, Woody Allen [Images] said that 80 per cent of success is showing up. That is particularly true in politics. If there is any issue you care about, you just need to show up to a meeting with other citizens who share your concern. Many of the most successful public servants start out by being active in their local communities. Barack Obama started out as a community organiser and Sarah Palin [Images] started out as involved in her PTA.

You have made a lot of efforts so that the Indian American community gets involved in politics. Can you tell us more about it?

I believe the Indian American community has a lot to contribute to the United States. The community has entrepreneurs who are leaders in alternative energy and who can be champions for wind, solar, and nuclear energy. Many Indian Americans are committed to improving math and science education in our public schools. The community can be a voice for increased investment in broadband technology, and for research and development funding in high technology.

One of the things I did is to organise issue forums with political leaders and leaders in the Indian American community on American competitiveness and innovation. Some of the contributions from these forums eventually became a part of the Democratic innovation agenda.

In your view, how will either Obama or McCain's win affect the war?

Victory in Iraq requires not just military success but also diplomatic success. Our leaders will have the difficult task of figuring out how to continue to bring different communities together in Iraq around a common democratic platform. My sense is that Obama has the skills to forge a diplomatic consensus in Iraq.  It will not be an easy task, but Obama is the type of bridge builder and uniter who I hope will bring parties in Iraq to a common agreement. Regardless of who is elected, I hope the next President will be able to pave the way for a peaceful, stable Iraq because the future of the Middle East depends on that.

With the current economic meltdown, do you think Barack Obama is better equipped to handle the financial crisis in America?

I believe Barack Obama is well equipped to handle the financial crisis. One of his strengths as a leader is that he surrounds himself with very capable individuals. He has an extraordinary team of economic advisors such as Robert Rubin and Warren Buffett [Images] who understand what it will take to put America on the path to prosperity again. He understands that there needs to be tax relief and better job opportunities and wages for the middle class.

One of the causes of the mortgage crisis is that middle class families faced stagnant wages and rising expenses. They took out huge home equity loans to make up for the differential. When the real estate market went down, a number of these individuals defaulted. Barack Obama understands the challenges that middle class families face (he is someone who knows what it is like to have credit card debt and have difficulty paying the bills), and his policies are committed to helping ensure that the middle class prospers.  The middle class has always been at the backbone of the extraordinary American economic success story.