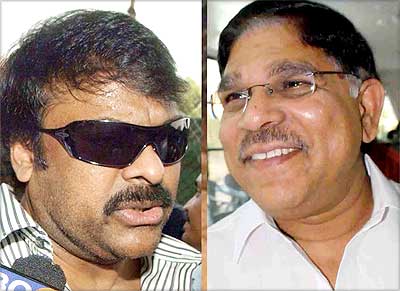 Putting an end to the suspense over Telugu superstar Chiranjeevi's [Images] plans to join politics, his aide on Saturday announced that the actor is likely to take the plunge in August this year.

"He will definitely respect the wishes of the people and enter politics. He has a clear and firm view. He himself will announce the decision," Chiranjeevi's brother-in-law and noted film producer d told reporters in Hyderabad.

Asked why the actor was taking so much time to announce the launch of the much-awaited political party, he said it was justified.

"Politics is too big an issue. And he is taking it up. I think it is reasonable on his part to take some time. I think he is likely to announce the decision in August," Aravind said.

"He would not take decisions in haste. Whatever he does, he will do it with caution and after weighing the pros and cons. We have waited for him this far, can't we wait for another couple of months?" he asked.

Aravind is considered the main force behind Chiranjeevi's political entry and is said to be involved in the nitty gritty of launching the party.

For several months now, political circles in the state are abuzz with reports of the matinee idol's possible foray into politics.

However, the actor himself has not made any public statement about his plans despite his fans and several organisations vociferously seeking Chiranjeevi's entry into politics.

Aravind's announcement was welcomed by fans of the Telugu superstar across the state, who began celebrating instantly.

The development came a day before the scheduled declaration of results of the bye-elections to four Lok Sabha and 18 assembly seats. The bypolls are widely seen as a referendum on the Telangana statehood issue.

Though the actor has not spelt out his mind on his political plans, backroom activity in the run-up to the formation of the new party is said to be underway.

As a prelude to the formal launch, training camps are being held for various social groups and potential party activists.

Informal talks have also been going on with Left parties amid indications that Chiranjeevi may adopt a pro-poor policy with social justice as the main plank.

Chiranjeevi, a Padma Bhushan awardee, has acted in 148 films in his three-decade-long career.