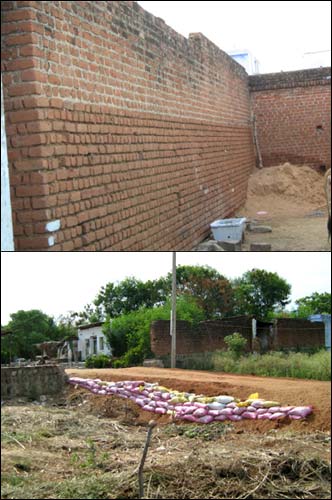 The infamous wall in Uthapuram village in Tamil Nadu, meant to keep Dalits away from higher caste areas, may have been demolished, but it will take much longer to demolish the walls in people's minds.

This village has an equal number of Dalits and Pillays, the latter belong to the Other Backward Classes.

However, the Pillays are 'backward' only in government records. Not only do they consider themselves superior to the Dalits, they are also financially better off.

The Dalits are not merely farm labourers, they also own farmland. This is rare in rural Tamil Nadu, where the landowners usually belong to the backward classes.

The wall owes its origin to the caste riots in 1989 that erupted when minor skirmishes between the Pillays and Dalits turned ugly. The Pillay community alleged that Dalit men sat under a peepul tree and teased girls from their community, who came to fetch water from a nearby public pipe.

In the Tamil month of Panguni (March-April), the Dalit community celebrates its annual temple festival in Uthapuram. As part of the festival, the priest participates in a procession across the village.

The Dalits believe that their diety lives in the peepul tree. In 1989, when the priest reached the tree along with a large number of Dalit devotees, members of the Pillay community told them that it was their land and the Dalits did not have the right to come there.

This triggered off the violence, in which two Pillays and three Dalits were killed. Later, four members of the Dalit community were killed in police firing.

Village elders and community leaders from 30 surrounding villages participated in a peace meeting that was called to resolve the crisis.

They decided that the peepul tree belonged to the Pillays as it stood next to their Mallyamman temple. Further, it was decided that a wall would be built to prevent Dalit youth from entering the Pillays' residential area.

The wall also makes up part of the homes of some Pillays. The Dalits now claim that the agreement to grant the peepul tree to the Pillays and build the wall was forced upon them as the Pillay community was more powerful.

V Pushpam, Uthapuram's panchayat president, told rediff.com, "The wall was an idea by the village elders from both communities. The panchayat has got nothing to do with it."

The village has not witnessed any violence in the last 19 years. While the wall separated the two communities, Dalits continued to work in Pillay fields. They bought foodgrain and vegetables from each other. The two communties even borrowed money from each other.

Both communities have members belonging to various political parties, who worked together during elections. But they never drink water at each other's homes. While the Dalits claim that the Pillays never offer them water, the Pillays retort that the Dalits don't drink water even when it is offered to them.

During this year's temple festival took place when Dalit devotees arrived at the controversial peepul tree, members of the Pillay community were repairing the Mallyamman temple which was covered with coconut leaves.

A member of the Pillay community, who is also a member of the ruling Dravida Munnetra Kazhagam in Tamil Nadu, is said to have told a fellow DMK worker, a Dalit, 'Please be careful with your crackers. They might set fire to the coconut leaves covering this temple and that would be disastrous.'

The Dalits then complained to the nearest police station located in the neighbouring village of Elumalai. The policemen ensured that the rest of the temple festival passed off peacefully, without any untoward incidents.

But the issue of the wall festered, and the matter was taken up by the local legislator, who belongs to the Opposition All India Anna Dravid Munnetra Kazhagam.

The state government promptly swung into action and broke a portion of the wall to carve out a path. While the Dalits hailed the move, members of the Pillay community returned their ration cards as a mark of protest and left for the hills nearby.

The Pillays have now presented a charter of demands to the district administration. These include:

If the area around the Mallyamman temple is given to the Pillays, the Dalits will not be able to bring their procession to the area.

Rebuilding the controversial wall is also not an option for the government, which will have to pay compensation and acquire the private land.

Alleges S P Murugesan, an accountant from the village, "The entire controversy was planned and executed by the Communist Party of India-Marxist to garner votes among Dalits. This is a village of 1,500 people. They brainwashed 25 Dalit youth and told them to reject the 1989 agreement. Then they planted the news in a national daily. They published a false photograph."

The district collector agrees that the wall was only 21.84 metres long, not 600 metres, as suggested in a newspaper report.

The village administrative officer of Nagasundaram village has been on duty in Uthapuram for a year now. He says the village was always peaceful, but adds, "The district collector is personally handling this matter. Please leave me out of this. I don't know anything."

The rift between the two communities is evident from the fact that they have two separate schools for their children. While Dalit children go to a primary school till Class 5, the Pillay community sends its children to a middle school till Class 8.

The Dalit community has seven graduates including a retired head constable, a bank manager, a Life Insurance Corporation clerk, a teacher and three men in the army.

The Pillays are better educated and have better jobs. Over the years, they have sold some of their fields to the Dalits, as they could not look after the land themselves.

This village, which has been in the news for the wrong reasons, is very much like any other village in Tamil Nadu. Boys from a particular community teasing girls from another community is the most common cause of conflict in rural Tamil Nadu.

The wall, which divided the village, has been razed. But bridging the social divide between the two communities will take much more effort from both sides.

Image: Top, the infamous wall and the newly constructed path.

Text and photographs: A Ganesh Nadar