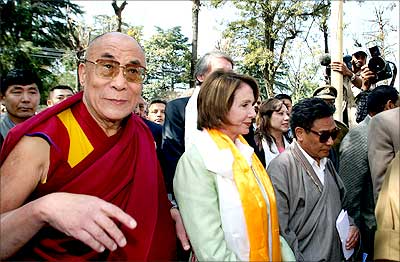 Asking all freedom loving people to speak out against the Chinese oppression in Tibet, United States Speaker Nancy Pelosi on Friday demanded an independent investigation into Beijing's allegations of the Dalai Lama [Images] being the instigator of the violence in Lhasa.

Pelosi, the Speaker of the House of Representatives and the third ranking US official, described the situation in Tibet as a 'challenge to the conscience of the world' and insisted that the international community should know the truth.

"Speaking for myself, I would say if freedom loving people throughout the world do not speak out against China's oppression in Tibet, we have lost our moral authority to speak on behalf of human rights anywhere in the world," she said.

On China's allegations that the Dalai Lama had instigated the violence in Tibet, Pelosi said, "We go with an added mission to call upon the international community to have an independent, outside investigation of the accusations made by the Chinese government that His Holiness is the instigator of violence in Tibet."

"This investigation is to make sure there is no association between His Holiness and the violence in Tibet," she said after a luncheon meeting hosted by the Tibetan spiritual leader.

Pelosi, who is leading a nine-member bi-partisan Congressional delegation, earlier received a rousing public reception at the main Buddha temple in Dharamsala.

She said the US Congress would continue to meet the challenge of conscience that Tibet offers. "The situation in Tibet is a challenge to the conscience of the world. What is happening, the world needs to know," Pelosi told the Dalai Lama.

Exiled Tibetan leaders and thousands of Tibetans gathered to welcome her in the hill town.

Asked whether she would introduce a resolution in the US Congress on the issue, Pelosi said, "There is interest among our members to have a resolution calling for such an investigation as to who the actual instigators are and to make sure there is no association between His Holiness and the violence in Tibet."

Pelosi is the first major official to visit the head of Tibet's government-in-exile since peaceful protests turned violent last week in the Chinese-ruled Tibetan Autonomous Region. However, the visit was planned much before the pro-independence protests began in Lhasa.

"It is particularly important that China allow monitors into Tibet," she said.

China, which has voiced its opposition to Pelosi's meeting with the Dalai Lama, is understood to be closely watching her trip to Dharamsala.

Pelosi was instrumental in the US decision last year to confer the Dalai Lama with the Congressional Medal, a top US civilian honour.

"Today, we are here at this sad time together in shedding the bright light of truth on what is happening inside Tibet," Pelosi said, adding "perhaps it is our karma, our fate, to be
with you at such a sad time. It is our karma, we know, to help the people of Tibet".

Hundreds of people lined the roads to the Dalai Lama's residence, some with signs saying "Thank you for your support" and "Long live America-Tibet friendship" and many waving Indian, the US and Tibetan flags.

On arrival, Pelosi was greeted warmly by the Dalai Lama, who draped a scarf around her neck.

Dharamsala, which is home to many Tibetans living in exile, has been witnessing sporadic anti-China protests for the past weeks since Beijing [Images] began the crackdown against pro-independence demonstrators in Lhasa.

Tibetan monks have been taking out protests marches from the town square to the main Buddha temple, while shouting anti-China slogans, several times during the day. As the sun sets on the town, Tibetans turn out in large numbers for a candlelight vigil. Several others are on a hunger strike outside the temple.

The town is also plastered with photographs of Tibetans tortured allegedly in Chinese jails. Tibetan flags dot the townscape with 'Free Tibet' slogans on walls everywhere.

Image: Nancy Pelosi  with the Dalai Lama at the Palace Temple in Dharamsala.

Also Read: Our Complete Coverage On Turbulence in Tibet