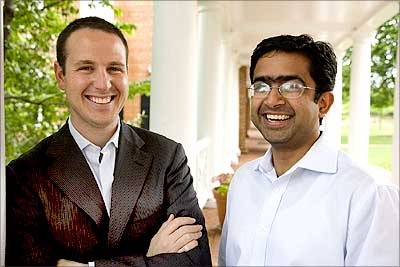 A business model originally conceived by an Indian-American student to supply power to India's villages by burning rice husks has won $50,000 in prize money after topping the prestigious Social Innovation Competition at the University of Texas last month.

The team, comprising Manoj Sinha and Charles 'Chip' Ransler from the University of Virginia's Darden School of Business, were judged to have the most compelling new idea to change the world.

The University of Texas's RGK Centre for Philanthropy and Community Service awarded the prize to Husk Power Systems, which uses proprietary technology to burn rice husks and generate three valuable products -- electricity, waste ash that can be sold as an ingredient for cement, and a reduction in carbon emissions.

So far, two rice husk generators are providing power to about 10,000 rural Indians, but the business plan calls for a rapid expansion that will put the miniature power plants in hundreds more villages within a few years. The technology provides off-grid power to rural Indian villages of 200 to 500 households. Using the husk-powered mini power plant, the team plans to offset close to 200 tons of carbon emissions per village, per year in India.

The idea was originally conceived by Sinha, who earned his engineering degree from the University of Massachusetts and holds 10 patents for work done at Intel, and Gyanesh Pandey, who left an engineering career in Los Angeles to return to India and oversee the rice husk project on the ground there.

Sinha said they envisioned refining the generator concept and raising money to donate rice-husk generators for two or three villages near where they grew up.

At Darden, Sinha shared the idea with Ransler, who suggested that the generators could be a financially-viable business that could be expanded to hundreds of villages. There are 480 million Indians with no power, and 350 million of them live in rural villages, concentrated in eastern India's 'rice belt' where the villagers are 'rice rich and power poor.'

Sinha, who was in India in connection with expanding the power generation model to include more villages, could not be immediately reached for comments.

'The final pitch to the judges had all the drama and emotion of a night on American Idol but with a much loftier mission,' said Peter Frumkin, director of the RGK Center for Philanthropy and Community Service.

Sinha and Pandey went to college together in India and hail from villages that struggle with lack of power. 'Our relatives still do not have electricity. We wanted to give back to those areas,' Sinha said.

The award was not the only one in a string of accolades that Sinha and Ransler have received for their Husk Power plans. April 7, they picked up a $10,000 check for winning Darden's annual business plan competition.

Also in April, they were selected as one of 10 finalist teams among 245 entries from 23 countries in the Global Social Venture Competition hosted by the University of California at Berkeley. May 14, Husk Power won the second prize at the 2008 Ignite Clean Energy competition at MIT, where Ransler and Sinha competed for the $125,000 top prize.

Ransler said that more research and some helpful feedback from several of the business plan competitions, the team realized that, with more engineering, the ash produced by burning the rice husks could be converted into a valuable ingredient for cement production.

Additional research revealed that the Kyoto Protocol, an international agreement to reduce greenhouse gas emissions, had established a trading program for carbon emission reductions that should enable the rice husk generators to be paid for reducing carbon emissions.

The team was struck by how 'these big things all work together' -- three sources of revenue could be produced from what was otherwise a waste product rotting in huge piles in villages across India. Even with conservative electricity consumption, revenue from the three sources would allow each rice husk generator to break even in about two and a half years.

Besides, Ransler said, a lack of reliable electricity is one of the biggest obstacles to small business growth in rural India, so providing a village with rice-husk power can be the enabler of a dozen other small business ventures. Sinha and Ransler concluded that 'someone should do this. Why shouldn't it just be us?'

Getting the electricity from the power plant to the various destinations -- village houses, irrigation pumps, water purification units and small businesses -- presented further challenges. Previous electrification projects in India have generally provided villages with intermittent power -- often only an hour a day -- coming from distant power plants (usually coal-powered), and travelling over miles of wires to reach small villages where average personal incomes are less than $20 a month.

In many cases villagers used the hours of downtime without power to illegally tap into the main power lines for 'free' electricity. Sometimes large sections of power lines were cut and sold as scrap metal.

Husk Power has developed strategies to combat such problems. They will require pre-payment for all electricity, and they will spend more to wire the village using double-insulated wire that is more difficult to illegally tap into than standard wire.

Since electrical meters cost $10 to $15 each, and an average household will consume only about $15 to $18 of electricity per year, Husk Power will instead use a $1 circuit breaker to distribute electricity to a branch line serving four or five households.

A Husk Power employee in the village will conduct an energy audit to determine how much electrical load the branch of houses will need, and will install a circuit breaker that allows only that much current to reach the houses. Any illegal tap or other excessive consumption will trip the circuit breaker.